Three years before Stunt Race FX, Pilotwings was the first title to really challenge my confidence in Nintendo.

Released in August 1991 alongside the launch of the Super Nintendo Entertainment System, Pilotwings came out in a time when I still relied on my parents' money for video games and could only expect to get a few titles per year, which made each new addition to the library all the more eventful. It was a horrible feeling, therefore, as a youngster, to rush home from the store and excitedly pop in that new cartridge, only to realize within the first few seconds of play that I hated this game. Even Super Play Action Football had me fooled through the high school mode. Not only was I disappointed in the game, but I was disappointed in myself for having wasted my parents' hard-earned dough. Clearly, I should have done some research before diving in, but, in those pre-Internet days, solid info was hard to come by, and I couldn't exactly trust Nintendo Power to be objective about a Nintendo-developed product. (For the record, NP gave it an enthusiastic 3.8 out of 5 in "theme and fun.")

It didn't feel like a game. There were no enemies to defeat, no blocks to assemble, no narrative of any sort, no real point that I could perceive. Yet somehow I was dying repeatedly and being told I was a failure. I didn't even know what genre this was. Flight simulator? Huh? It was certainly something different, and, whatever it was, I didn't like it. 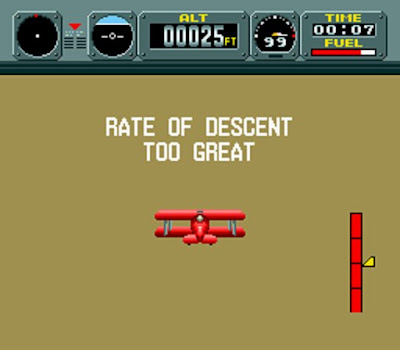 Really, the whole game, even the title screen, was a glorified tech demo for the 16-bit console's revolutionary pseudo-3-D "Mode 7" graphic effects. It was all just a lot of spinning around and zooming in on backgrounds. Perhaps it was technically impressive for its time, and, as an ignorant child who expected games to be fun, maybe I just couldn't appreciate it on that level.

(I still remember, when we went to Circuit City to pick it up on sale, the manager directed us to a presumably still green clerk, whom he then encouraged to try and sell us F-Zero as well. Of course, the stellar F-Zero was, along with SimCity, one of the launch titles that my family had already picked up with the original purchase of our SNES. It was a more restrained and far superior demonstration of Nintendo's Mode 7 technology. But I digress.)

Anyways, Pilotwings was a crappy flight sim that included four equally lame events: "light plane" (a biplane), hang glider, skydiving, and "rocket belt," which was not nearly as exciting as it sounded. All of them offered pretty much the same experience. The objective was to fly through rings or tag a couple glowing spheres for points before making landing at a designated target spot. The thin concept alone probably would have given me reason enough to loathe it--I mean, I already hated Barnstorming, and this was no Barnstorming--but the developers had to make the game brutally difficult on top of that. 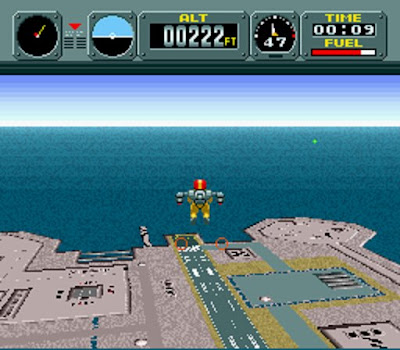 A true simulation despite the limited two-button controls, there was almost no give to the physics. A subtle tap on the D-pad at high altitudes would have drastic consequences on your craft's course, and not even the most extreme yawing motion would allow you to recover once you drew too close to the target. And, Mode 7 be damned, the simple graphics made it very difficult to gauge distance and direction until it was too late. In hindsight, there seemed to me a distinct lack of aids to help track targets that were so far away, leading to a lot of guesswork. I honestly couldn't comprehend what it served gaming to shoot for realism if the result was an exercise that was beyond the average player's abilities.

As I noted, however, gaming options were scarce in those days, and I needed to squeeze as much fun as I could out of every purchase. One day, faced with an empty summer like so many others, I set myself to mastering this game. By that, I mean I used a password to skip to the last, most difficult training exercise, and then dedicated the next several days to practicing until I could clear the minimum score needed to advance. Eventually, I somehow pulled it off and earned a lame congratulations screen, although I'm sure luck was as much a factor as skill. Did the experience raise my appreciation for the mechanics? Not really. I'll admit, for a moment there, as I started to grasp the controls, I found the game mildly diverting. But, once it was over and I had my pilot wings, I went right back to deriding the game with renewed vehemence. There was still no point to any of it, and beating it only made that clearer.

The only barely entertaining part of the game was the helicopter mission that followed completion of training. It may have taken the place of a boss stage, but I perceived it as a reward, as it was, not only easier than the regular training exercises, but also the only remotely exciting element of the game. Playing nothing like any of the regular events, it was a slower Tiger Heli, minus the action and auto-scrolling. The short stage was a rescue operation that had the player flying over a forest while bombing anti-aircraft guns. It was not exactly a Captain Skyhawk-caliber shoot 'em up--the miserably sluggish turning speed made it very difficult to dodge fire--but I ended up playing it a lot more than I probably should have, again because there were fewer games back then. Had the entire game been composed of stages like this, it still would have been awful, but at least I would have recognized it as an actual game. There was also a second helicopter mission that followed completion of the "expert" training, though the only difference was that this one took place at night. 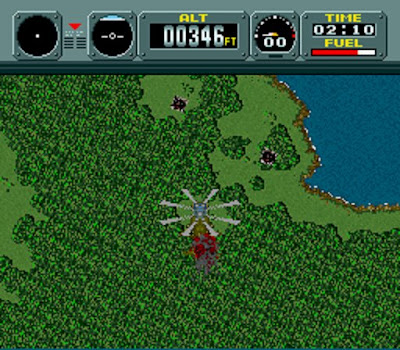 It's not the absolute worst game I've ever played. At least Pilotwings grew marginally better the more I played it, whereas Stunt Race FX grows more awful with every passing second.
Posted by Henry at 2:55 PM

Man, I really looked forward to using that motorcycle in Stunt Race FX, and then we got it and it sucked hard. Two-wheeling hasn't been that stupid since Excitebike.

It's funny you say that, because I've read speculation that Stunt Race FX was actually intended as a spiritual successor to Excitebike. And Excite Truck and Excitebots have in turn been compared to Stunt Race FX.

I played an Excite Truck demo briefly when the Wii was first released, and it was like a less wobbly version of Stunt Race FX. Still not fun or fast, but at least it didn't look like ass pudding, and the Wii controls were more functional that the SNES managed with Stunt Race FX.