The Vision of Escaflowne – Funimation's Kickstarter 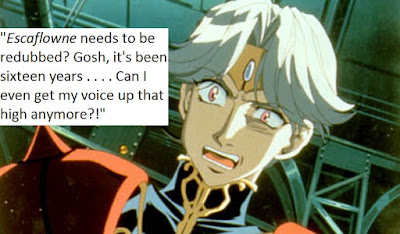 This April will mark twenty years since the original broadcast of The Vision of Escaflowne, which premiered on Japanese television on April 2, 1996. Probably not actually conceived as an anniversary project, but well-timed nonetheless, a Kickstarter campaign went up two days ago to fund the creation of a new English-language dub for the upcoming release of the HD extended cut. The project is on pace to crush its $150,000 goal; as of this writing, with twenty-nine days to go, already $136,388 has been raised by 882 backers pledging an average of $154.63 apiece. That’s pretty cool, if only because it attests to a persisting, modestly sized but clearly passionate, fan base for what remains one of my favorite shows of all time.

Created by Shoji Kawamori (Macross) and directed by Kazuki Akane, The Vision of Escaflowne was, in many ways, the sum, the apotheosis, the quintessence of anime up to that point. The Sunrise production featured giant robots in a medieval high fantasy world, and, maximally broadening its appeal, it centered around an ordinary Japanese schoolgirl as its point-of-view character. The series successfully blended mecha and shoujo like no single anime before it, even as it evoked so many of its predecessors across genres. Far more than a stew of tropes, Escaflowne brought together nearly everything about the art form that so captivated anime fans of the ‘90s, particularly those emerging enthusiasts in the West. Full of action, romance, and drama, the tightly serialized production possessed enough imagination to deliver a hand-drawn otherworld sufficiently removed from reality to be enticing yet mature enough in tone and content to feel relevant and even, at times, profound. Topping it all off, the series was elevated by an incomparably epic score from Hajime Mizoguchi and Yoko Kanno, along with production values that far outstripped just about any television anime prior.

In North America, Escaflowne was one of Bandai Entertainment’s first releases (originally subtitled-only on VHS in 1998) and ultimately one of its all-time bestsellers. It was an immediate hit with the hardcore sect, but it actually took a few more years before an English-language dub was produced for the new DVD format. The dub, handled by Vancouver-based Ocean Studios, first debuted on TV, with a heavily edited “Saturday morning cartoon” version airing on YTV in Canada and (briefly) on Fox in the US in 2000.

Even without a wide-reaching Cartoon Network run, Escaflowne’s success with Western audiences was enough to encourage Sunrise to adapt the story into a theatrical film in 2000, but the series has since largely faded from the spotlight. That’s nothing so unusual, given how quickly the anime industry must move on, with more and more new shows being released every year. For all its quality and broadness of appeal, Escaflowne was probably never unique enough to endure alongside, say, Neon Genesis Evangelion, roughly its contemporary and one of the singular works to still grip audiences’ imaginations long after its run. It probably also doesn’t help that Escaflowne never had much in the way of tie-in merchandise. Even the many DVD releases and re-releases are now long out of print in the US, so I don’t imagine most anime fans of the last decade have ever seen the show.

That brings us to this Kickstarter. With Bandai Entertainment now defunct, Funimation has picked up the Escaflowne license and intends to release the series and movie on Blu-ray. What’s more, this will be the English-language debut of the show’s extended cut.

As the story goes, when the crew was early on still finding its feet with the production, episodes were coming out overlong and then had to be trimmed to fit into the allotted Japanese broadcast minutes. The deleted footage was later restored for the Japanese home video release, but for whatever reason, Bandai’s English version was based on the broadcast cut.

I’ve never seen the extra footage, but from what I’ve heard, it doesn’t amount to more than a few minutes in the early episodes. In any case, the complication is that, if Funimation were to dub those additional scenes in English for this new release, the likelihood of them being able to maintain continuity by bringing together the original English-language cast is probably quite low after all these years (supposing anybody would even want the original actors back). The old DVD audio also probably would need quite a bit of enhancement to make it suitable for an HD release today. It would be easier to record a brand new English dub for the entire series. Of course, it would be even easier just to release it with no English-language track at all, as has become common in the North American anime market. So, basically, Funimation is turning the fate of the Escaflowne English dub over to the fans via Kickstarter.

The whole campaign is a bit sketchy, and it’s certainly not helped by the evasive answers given by Funimation’s representatives in the exclusive ANN interview that introduced the project. Two points: 1) the $150,000 that Funimation has set as its goal would certainly not be enough to fully a fund a new dub, and 2) regardless, Funimation surely has enough money to budget for a new dub without having to call for direct funding from the fans. Rather, Funimation basically admits that the Kickstarter is more to measure consumer interest (i.e. Funimation already has enough money, but it needs to know whether it’s worth spending on a feature people might not care about) and then, supposing the goal is met, to serve as a pre-order campaign. I don’t doubt that the Kickstarter will succeed and that Funimation will come through with all the rewards promised to backers, but I must say, the $155 reward tier for the complete series and movie would be a ridiculous price for the same product at retail. So there’s clearly a lot of extra money going to Funimation, which they probably don't need as funding.

But hey, I’m happy to know that I’m not the only one that still loves this show, and as long as this dubbed extended cut is getting made anyway, I’m looking forward to experiencing the series anew. Actually, I haven’t watched The Vision of Escaflowne in about fifteen years, so I can’t say for sure if it holds up, but I’ll gladly take this release as an occasion to revisit it!

Posted by Henry Fung at 9:00 PM No comments: