Kiki's Delivery Service (1989) was the first Studio Ghibli movie that Disney localized for American audiences. The English version, arriving on VHS in 1998, was a surprise hit, selling over a million copies, and it also played regularly on the Disney Channel. Accordingly, it was also the first Ghibli and Miyazaki movie that I ever watched. At the time, I didn't really like it. It seemed to be a movie about not much in particular, where not a lot happened of any consequence. Watching it again, I now think it's probably my favorite of the Miyazaki films I've covered thus far.

In a departure from his previous Ghibli productions, Kiki's Delivery Service was not an original story by Hayao Miyazaki, but rather based on a popular 1985 children's novel by Eiko Kadono. Miyazaki also did not originally plan to direct it himself, as he was still busy with My Neighbor Totoro (1988) when production began. Dissatisfied with the staff's progress, however, Miyazaki finally ended up writing and directing Kiki himself, and the result was a film that bore many of his hallmarks yet still felt distinct from his previous works. Up to this point, Miyazaki had done a post-apocalyptic epic, a romantic boys' adventure, and a children's storybook movie. Kiki's Delivery Service, meanwhile, was a coming-of-age tale, with slice-of-life elements.

The story is about Kiki, a 13-year-old witch, who, at the beginning of the film, moves to the big city to live on her own for a year, as part of a customary rite of passage for young witches. By witch standards, she's not very talented, but, after a rough start, she decides to take advantage of her flying skills to operate a delivery service out of a friendly couple's bakery.

The movie's second act then consists of episodes of her settling in, running around town and meeting new people on the job. These were the parts that I originally found dull, probably because there never seemed anything much at stake. Also, most of the people Kiki met just seemed too nice to believe. Shouldn't there have been at least one cynical character always doubting her ability to make it on her own, advising her to give up and run on back home, maybe even working actively toward seeing her fail? There really isn't any antagonist whatsoever in Kiki's Delivery Service.

In the movie, the episodes are tied together within an overarching narrative with adolescent themes of Kiki trying to find her place and herself, but it's easy to imagine each delivery as a short story with its own tidy resolution. They're kind of cute, kind of sweet, and kind of funny. After a long week of work and not much else, I actually found these chapters, slight as they are, quite refreshing. Similarly, I didn't mind the lack of any serious conflict. My favorite scene in the whole movie is when Kiki, coming back from an errand, finds a lovingly designed wreath of bread unexpectedly at the front of the bakery advertising her delivery service. With no dialogue audible, she rushes in to embrace the taciturn baker who crafted it. It's a small scene and maybe a small, inconsequential moment in the grand scheme of the movie. Or maybe it's small moments like these that make one's day and, ultimately, one's life.

No, there isn't a whole lot at stake through most of Kiki's Delivery Service, but I guess, to me, that actually lends the story credibility, despite that it stars a witch and takes place in an imaginary idealized European seaside town—by the way, one of the most gorgeously realized fictional settings in any film. It's real enough to believe but still fake enough to enjoy. I apologize if that came across cynical, but I only mean that watching Kiki is like getting a glimpse at what real life ought to be, maybe what it can be, indeed what it has been at its best.

It probably helps things that Kiki herself is much easier to relate to as a character than previous Miyazaki protagonists. More fallibly human than Nausicaa, she's clumsy, she can be shallow and superficial, she gets frustrated and even bored. Indeed, that last is maybe the most charmingly realistic aspect of Kiki's Delivery Service—the way it gets life's doldrums. As Kiki starts to settle into life's routine is when she starts to wonder what it's all about and whether there's more. 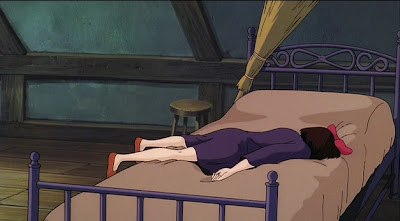 Kiki's Delivery Service is not all a laid-back series of vignettes. When Kiki is invited to ride on the backseat of a human-powered aircraft—basically a bicycle with propeller—the result is one of the more exciting sequences in Ghibli history. And the climactic scene involving a rescue from a crashed dirigible ranks up there with any superhero movie action sequence.

Kiki's Delivery Service is more involved than My Neighbor Totoro, but no less heartwarming. It's not only sweet but also a thoughtful movie for adolescents. As Kiki learns, independence is not just about fending for yourself, but about finding an identity apart from where you came from and what you've been given. And, although it may feel smaller than Nausicaa or Laputa, in that way it teaches us to reflect on the nice little moments in our small lives, which, at the end of the day, is all that most of us have.
Posted by Henry at 4:14 PM

"Kiki herself is much easier to relate to as a character than previous Miyazaki protagonists."

This is probably the primary reason that Kiki was and remains my favorite Ghibli film. This and the fact that it's set in "one of the most gorgeously realized fictional settings in any film."

It's sweet but not really "kiddish" like Totoro, also doesn't have the unpleasant weirdness of Totoro. And when I watch Kiki, I feel like I get it. The other movies, it's like Miyazaki and his pals are playing some kind of esoteric joke that I'm missing, but that even if you got it, would elicit only a mild and resigned chuckle.

Those other movies, it's as if in the midst of silence, someone you don't know suddenly sighs and says, "Ah, what a world." I might initially feel sympathetic, but then I'd quickly turn skeptical at the lack of context, and think to myself, "Okay, . . . and . . .???"

Just curious, but which movies specifically have you seen? And which ones did you not get?

I found Ponyo pretty baffling, and I already said what I had to say about Totoro (I could probably say more if I felt I needed to). But Spirited Away? Howl's Moving Castle? They had their "lost in translation" moments, but, for the most part, I felt they struck the right chords at the right moments. I'll probably write more on them later, but those were my impressions on first viewing. I don't expect to comprehend the films less on re-watching.

And recently, Whisper of the Heart.

That's ten out of the 20 listed on Wikipedia (including the two technically pre-Ghibli films).

I would say I "got" Whisper, but there wasn't much to get or enjoy. Totoro seemed like a sad movie with a dying mother, yet it was packaged as a whimsical vignette, which I didn't get. I don't really remember Laputa, Nausicaa, or The Cat Returns, though the last one left me with impressions of unnecessary psychedelia. I guess Howl's and Spirited Away were pretty straightforward action flicks . . . or were they? Because that's all I got from them. Maybe your write-ups will refresh my memory. Ponyo was terribly boring, though I wasn't as morally offended as you seemed to be.

I guess overall, the movies seem to expect you to find them unbearably charming, but I find that expectation merely unbearable. That's my main beef with what I've seen.

The exceptions are Kiki and Arrietty. I would say that maybe Ghibli is better at comedy, but Arrietty isn't really a comedy. But they do share an irreverent attitude toward adventure and growing up. (Growing up in Whisper was kind of convoluted - too real?) Though most of the movies above are concerned with growing up, I think these two are legitimate examples of bildungsroman, with the entire journey completing a transition to adult responsibility in a natural way, rather than feeling forced.

Kiki remains the only Ghibli movie that I liked without reservation. I might even say I love that movie. Arrietty, to my great surprise, was a really captivating film, with the only sour notes being the lack of logic at occasional points in the story, and the useless mom. But I'd be grasping at hairs, because the silly parts of Arrietty actually were charming, and it never felt pandering. Maybe I just have a soft spot for creepy invalids (and/or creepy voice acting).

Hmm, I'm thinking maybe Will Arnett was misused, because that dad was one of the least funny characters in movie history. Also, this two English versions thing makes me wonder if Brits ever have a hard time understanding Americans' speech, the way that we sometimes can't make out their English.

So does this make you want to watch the other version now?

It'll probably sound just like me when I was making fun of what the American voice actor for the dad would sound like.

Actually, what would truly surprise me is if I watched the American version and didn't like it just because of voice acting differences. I suppose that would strongly validate the importance of voice acting. It might even lead me to wonder how I'd feel about some of the other Ghibli movies had the voice acting been a bit more, you know, Britishy.