To date, Isao Takahata's Only Yesterday (1991) is the only theatrical Studio Ghibli feature yet to receive (or be scheduled for) an English-language dub or US release. During a Q&A back in 2005, Disney's Rick Dempsey, who directed a number of the English dubs of Ghibli films, explained that the adaptation had been shelved indefinitely because the original movie was more for adults, and if and when it did get a US release, it might be subtitled-only. This surprised me, considering that Disney found a way to bring over Pom Poko (1994), despite it featuring tanuki testicles on display for pretty much the entire movie. I didn't think any Ghibli movie could pose more of a marketing challenge for Disney than that one (well, except for Grave of the Fireflies, which Disney never had the rights to anyway). But maybe it's because of the lengthy episode centered on menstruation, or maybe it's that the father comes off abusive in one scene. Or maybe Only Yesterday just wouldn't be that compelling to Disney's target demographic of children. Whatever the case, it's a shame that this film remains unavailable in the US. I was able to view it when Turner Classic Movies aired a subtitled version in 2006, despite it not having an official US release. What I found was an unforgettable movie unlike any other Ghibli had ever done, unlike anything else I had ever seen in animation.

Based on a manga by Hotaru Okamoto and Yuko Tone, Only Yesterday tells the story of Taeko, a single woman working in Tokyo, who, while vacationing in the countryside, finds herself flashing back to memories from when she was in the fifth grade. The original manga was a compilation of episodes about only the child Taeko, but the movie shifts back and forth between the adult Taeko in 1982 and the flashbacks set in 1966.

In either setting, moments are drawn and discussed with a delicate realism seldom seen in animation. Takahata devotes time and startling attention to detail to such simple scenes as characters eating pineapple or picking safflower. If you were one to count cels, then you might regard his allotting so many to realizing such mundane moments to be a wasteful expenditure of labor and run time. And yet, where seeing the Catbus in Miyazaki's My Neighbor Totoro may have made me think, “I've never seen anything like this before,” these meditative sequences in Only Yesterday, though much the opposite of the Catbus, nevertheless evoked in me a similar reaction of “I didn't know you could do that in animation.” Indeed, these quiet, reflective scenes, for all their simplicity, have a mood and a power to them that you'll find almost nowhere else in the medium.

The flashbacks contain occasional whimsical flourishes, as when a blushing Taeko's emotional state, following her first awkward romantic experience, is illustrated by her rushing off in the direction of the drawn background, but then, without missing a step, seemingly running along the surface of the animation cel itself, her feet lifting off the painted road, before she then proceeds to swim through the clouds toward sleep and dream. These touches charmingly depict the way a child's imagination can warp reality, as well as how the memories of childhood can be further tinted by nostalgia looking back.

The memories themselves are slices of life, not dramatic turning points. The flashbacks come to Taeko as she approaches a crossroads in her as yet unfulfilled adult life, but we are not meant to understand that her tenth year was her most pivotal, when this or that wrong turn or fateful decision determined the trajectory of the rest of her life. My favorite part of the movie comes when child Taeko is overjoyed to be offered an acting gig, only to have her own father forbid her going into showbiz. Cutting back to the present, Taeko's friends, having heard her tell the story, remark on the cruelty of her father to stand in the way of her dreams. But then Taeko reminds them and us that a whole seventeen years passed between then and now, and, in high school, she did try acting, only to find that it wasn't for her. But if it ultimately didn't shape the outcome of her life, then why was this memory featured for our consideration above, say, one from her high school attempt at acting? 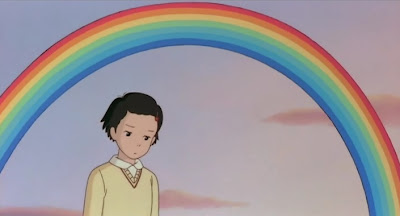 Perhaps a memory doesn't have to be especially consequential in order to be personally meaningful. And, to be sure, Takahata's approach is, above all else, deeply personal. Some lengthy asides about organic farming notwithstanding, Takahata's movie is brimming with humanity. Now close in age to the adult Taeko, I find myself easily able to identify with the character at both stages depicted. I don't mean the details, but the awkwardness, the loneliness, the restlessness that she reveals upon self-reflection—it all rings so true, as do memories that poignantly blend nostalgia and embarrassment.

Reflecting on my own ten-year-old self, what I remember are footraces and essay contests, ice cream socials and Drug Abuse Resistance Education, and the time I should have gotten at least a triple in softball but was instead called out for throwing the bat. Looking at my life now, does any of that stuff still matter? These experiences have never helped me land a job or a wife or, really, anything else beyond the moments themselves. To that extent, they certainly haven't defined who I am. And yet, looking at it another way, those memories are no less my story than any others in my life. I look back and think that maybe those moments did reveal who I was and am, not by defining me, but by how I defined them. At least, for whatever reason, they have stuck with me. I can recall them clearly and still feel now as I did in the moments, as if it were all only yesterday.
Posted by Henry at 11:10 PM