Developed by Xanth Software F/X, Faceball 2000 was an updated version of MIDI Maze, a 1987 Atari ST computer game that was quite possibly the first fully-formed example of the now prolific, perhaps even dominant, first-person shooter genre. The Faceball 2000 name was first used for the Nintendo GameBoy port of MIDI Maze published in 1991 by Bullet Proof Software. I was familiar with the GameBoy game, but the version I owned and played the most was released a year later for the Super Nintendo Entertainment System.
In Faceball 2000, the player took control of a Holographically Assisted Physical Pattern Yielded For Active Computerized Embarkation (HAPPY FACE). As the acronym suggested, the player "character" was a basically nondescript smiley face, although its design was moot, because the entire hook of the game was that it played from a first-person perspective, casting the player directly into the action. The main "Cyberzone" campaign of the SNES release had players freely roaming a maze of flat, untextured walls, elimating other variously shaped and colored hostile smiley faces called "Smiloids." The player's only means of attack was to spit large, ball-shaped bullets at targets. The different Smiloids, meanwhile, could fire back balls of their own, crash into the player and explode on impact, or perform close-range "bite" attacks (in quotations because there was no actual biting animation). When the player had taken out enough Smiloids, an exit would appear to open up the way to the next stage.

In this pseudo-3-D game, height was not a factor, since it was not possible to aim up or down. The balls simply fired straight ahead according to the reticle permanantly fixed on the center of the screen. With only the cross-shaped directional pad for maneuvering, there was also no way to strafe. Redundantly, the shoulder buttons functioned the same as left and right directional. The balls did not fire at anywhere near bullet speed, however, and so long as you kept moving, it was quite possible to dodge individual shots. Greater care was required when aiming and shooting on offense, since players started out with a very slow rate of fire. 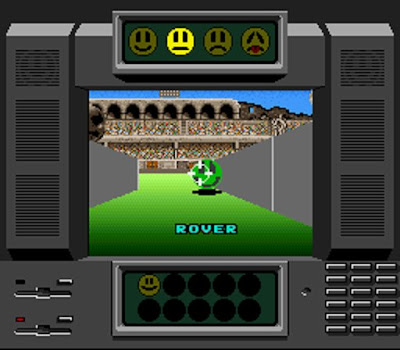 More appealing than Cyberzone was the "Arena" mode, where players could go head-to-head in competitive frag-fests. As the foundation for the multiplayer deathmatch experience so vital to the modern FPS, Faceball 2000's versus play was its most significant contribution to the evolution of the genre, but in an era before widespread online, Arena was held back by technical limitations. The SNES version featured only two-player splitscreen, plus bots. The GameBoy and Atari ST versions included sixteen-man versus, but the cord-based setups were impractical for anyone at the time who wasn't either working on the game or lucky enough to have some crazy hardcore friends. In fact, Robert Champagne, lead programmer on the GameBoy version, recalled having to operate multiple GameBoys himself during playtesting, because they could not get together a full room of sixteen out of the small development team.

With not a lot of variation in level design, none in weaponry, and little in the way of cover besides corners, Arena combat did not involve much strategy. Mostly, players would just chase one another at high speed while firing constantly. A retreating player could return fire while running backwards and either try to turn the tables at the corner or face likely death when they backed into an ill-placed wall because they couldn't see where they were going. The simplicity of the mode kept things fast-paced and exciting, although, factoring in the ease of bullet-dodging, the first-to-ten rule could make the one-on-one matches overly long on the SNES. 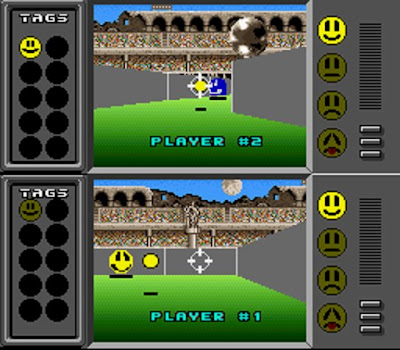 In addition to Cyberzone and Arena, the SNES Faceball 2000 also included a third, hidden mode that could only be accessed through use of a simple cheat. That mode was "Cyberscape," which was nothing less than the entire campaign from the GameBoy version. At over seventy levels, Cyberscape was actually longer than Cyberzone, and frankly a better introduction to Faceball 2000, thanks to the inclusion of some instructional text at the beginning of stages to guide players step-by-step through the mechanics and give insight into the varying personalities and AI behavior of the Smiloids. While some levels were extremely short, they offered greater variation than the straightforward action of Cyberzone. Rather than unlocking the level exit by fulfilling a kill quota, players had to navigate through mazes with fixed starting and ending points, overcoming scripted obstacles placed along the way. My favorite stage was "Gauntlet," where immobile Smiloids lined both sides of a corridor, shooting anything that crossed their sights. The obvious solution was to simply kill all of them before proceeding down the passage, taking advantage of their inability to turn by sniping them at an angle, but I felt that was too anticlimactic, and so I was always determined to reenact the final scene of the Clint Eastwood film, The Gauntlet, by using collected armor upgrades to power through the hail of fire.

For the sheer enormity of its contribution to the game's total value, Faceball 2000's hidden Cyberscape mode was, for me, the coolest secret I'd ever encountered in a video game, better even than "Justin Bailey" or any use of the Konami code. The bonus inclusion of such a fully fleshed-out mode seems unthinkable now in this day and age of charging consumers for additional downloadable content unveiled even before a game's release at retail. Publishers today might tell you that said content is developed and budgeted separately from the retail package, and so it gets released and priced separately. That, if not for the avenue of DLC, such content wouldn't exist at all. But isn't that just a way of breaking down a game's monetary value and quantifying it by a nonsensical dollar-to-part formula? Yet for the retail packages, these companies are also happy to conform to prices arbitrarily standardized to the publishers' advantage. Isn't that having it both ways? I assure you, that road doesn't lead anywhere good. As a fan, I'm naturally inclined to offer my honest support for the companies that provide me so much joy, but as a consumer, I also have to have my own back and recognize that, ultimately, the industry, which includes the press, is a business directed by a very small number of people making a very large amount of money by working little guys like me for as much of our hard-earned cash as they can get. But I digress.

Too far ahead of its time, Faceball 2000 was, in its own day, rather an unassuming and underappreciated title, so it's hard to say to what extent it really influenced Wolfenstein 3D and the FPS as we know it today. I myself did not recognize it as a revelation. I appreciated it as a fun and unique game, but never did I suspect what lay in wait just around the corner. The fundamentals were all there, including deathmatch and even two-player co-op through both campaign modes. Going back to the game now in the year 2009, it remains surprisingly playable. Though mechanically and visually primitive, it's still reasonably fast, exciting, and intuitive. Sometimes I wonder if today's shooters, particularly those misguided handheld attempts, mightn't benefit from a paring down of overcomplicated systems and graphics to produce a game that just effectively recaptures the basic thrill of Faceball 2000.
Posted by Henry at 12:34 PM

Email ThisBlogThis!Share to TwitterShare to FacebookShare to Pinterest
Labels: foolishness, gaming, The Essentials