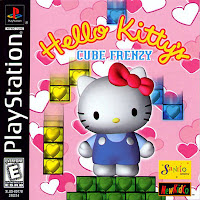 Players could be forgiven for missing this gem of a puzzle game, given that it was a license-based title, that it was this specific license, that it wasn't even licensed to a "legit" publisher. No, it was developed by Culture Publishers and published by NewKidCo. Sweet Jesus! you might be thinking, but I picked up the unassuming game because I thought my younger sister might enjoy it. It served that purpose well, but, when all was said and done, I think I ended up enjoying it more than she did.

Released in 1999 for the Sony PlayStation (there was also a version for the Game Boy Color), Hello Kitty's Cube Frenzy (or Hello Kitty's Cube de Cute, as it was known in Japan) tasked the player with guiding the popular Sanrio mascot to a number of items placed about the stage. Hello Kitty would continuously travel left and right automatically, and the player aided her by positioning falling blocks to create stairs and platforms as needed to reach the items. The design was vaguely similar to the Puzzle mode of Tetris Plus, where the player had to clear lines as quickly as possible to open up a path to the bottom of the stage for the professor character before the spiked ceiling crushed him. But Hello Kitty's Cube Frenzy was a more sophisticated title that, far from feeling like a hack of Tetris or Columns, provided an utterly original puzzle experience. 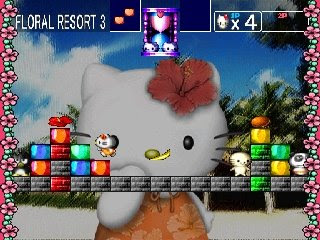 One of the keys was the Lemmings-like one-track stupidity of Hello Kitty. Moving left and right by herself, she would surmount single blocks along the way and change direction if she hit a wall. If a ledge or fatal pit lay in her path, she would blindly march toward it unless the player either built a bridge across it or manually turned her around using the shoulder buttons. While all this went on, the player also had to attend to puzzle pieces that continuously dropped from the top of the screen. Some finesse was required to lock the variously shaped blocks together, and they could be cleared out Columns-style when grouped with the same color. The point, of course, was to use them to construct pathways for Hello Kitty to reach her treasures, but, if the game dealt you the wrong shape or color, you would likely have to dump it off to the side until the right piece came along. Finally, complicating matters, the fiendish Badtz-Maru and his pals provided opposition, getting in Hello Kitty's way and rearranging blocks set down by the player. With everything happening at once, the game felt very much alive, since you had to manage the blocks while also keeping an eye on Hello Kitty, and victory only came when you managed to put it all together within the set time limit.

For a single player, the inventive mechanics and lengthy story mode made for a moderately diverting title, but the game really shone when played in two-player co-op. The multitasking gameplay took on another level when two Kitties and two sets of falling blocks had to share the same stage. It made things more complicated and perhaps more difficult, but it also opened up new strategies. For me, the defining moment of the entire game came when my sister and I, with almost no time left, had to fit our floating pieces together in midair to construct a temporary bridge at just the right moment for an oncoming Hello Kitty, closing in on the ledge, to cross and reach the final treasure needed to clear the stage. So tight was the timing, as we stood on that razor's edge, that we couldn't even communicate intelligibly with words. We both just had to know what to do in that tense moment, and that feeling of almost psychic synchronicity was co-op gaming perfection.

There was also a versus mode, but to call it broken would be generous. Because the two players' pieces could not travel through one another even during the placing phase, players would constantly block each other's way, whether deliberately or not, and neither one would ever achieve anything.

For Sanrio fans, some decent production values provided good fan service. The story mode included several cute pre-rendered movie sequences. Hello Kitty gained additional outfits with each new environment, and, after completing the story mode, you could even play with other Sanrio characters, including Pochacco, Pom Pom Purin, and the Little Twin Stars. Sadly, My Melody was relegated to a loading screen, and this was a few years before Cinnamoroll's time.

It would have been easy to write off Hello Kitty's Cube Frenzy without ever trying it, but it ended up as one of the most unusual yet rewarding cooperative gaming experiences I've ever had.
Posted by Henry at 2:45 PM

For sure, this was one of my favorite game of play station, as you, I used to play it with my brother, we were I think 7 and 10, this used to be great, I remember he yelling at me because the piece we were waiting for I placed it the wrong way, this was funny.