Although I no longer actively follow any team sports, they do make for some fun gaming from time to time. Over the years, I've played probably a couple dozen team sport video games--some for love, some for money, some just to cheaply distract myself from the wretchedness of life --but the king of them all remains Tecmo Super Bowl for the Nintendo Entertainment System. The 1991 followup to Tecmo's Tecmo Bowl for arcade (1987) and NES (1989), the entirely Japanese-developed Tecmo Super Bowl was the most complete American football game the world had yet seen.

Although the Tecmo Bowl series would later be distinguished from contemporary Madden titles as the alternative "arcadey" take on the sport, inhabiting the same category as NBA Jam, Tecmo Super Bowl for the NES was actually the most authentic football simulation of its day. Most immediately attractive about the package was that it had the licenses for both the National Football League and National Football League Players Association, meaning that it was able to include all the real-life teams and players (well, almost all players). These are basically requirements for any team sports game to have a chance in today's market. EA's exclusivity agreements with the NFL and NFLPA have consequently earned the publisher a lot of criticism for eliminating competition and effectively causing the genre to stagnate. But by 1991, there had already been three installments in the John Madden Football series, and not one of them had either real teams or players. 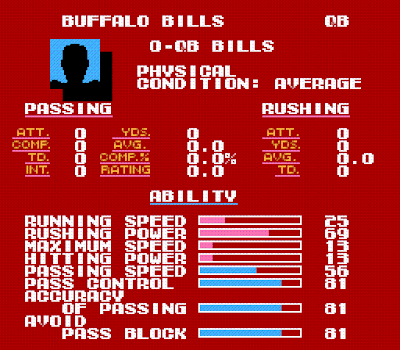 Part of my eventual disenchantment with professional team sports was due to my growing awareness that the leagues were largely populated by cheats and criminals. I'm sure the pros of my youth were merely more discrete with their sins, but I would still argue that Tecmo Super Bowl featured the greatest generation of NFL players. That included Joe Montana (49ers version), Jerry Rice, Barry Sanders, Lawrence Taylor, Warren Moon, and Dan Marino. Admittedly, the game predated the peaks of some future stars' careers--Emmit Smith was mediocre, John Elway kind of stank, and Steve Young, arguably the most talented quarterback of all time, was still just Joe Montana's scrubby backup. This was also before all that Brett Favre crap, but the game did include a lousy Vinny Testaverde, which is just as good in my book. And in a move that first introduced me to the complications of licensing, Randall Cunningham and Jim Kelly were missing from the game, but the faceless "QB Eagles" and "QB Bills" had their skills and positions.

The biggest star of all, however, was Bo Jackson. Although his professional career was cut short by a horrific injury and he is these days largely forgotten, he was the greatest sports phenom of my childhood. One of the most complete athletes in history, Bo Jackson was a professional in both football and baseball at the same time. While there have been a small handful of other modern two-sport pros, only Deion Sanders (also in Tecmo Super Bowl) was anywhere near as legit in both as Bo, who was actually an NFL Pro Bowler and an MLB All-Star. In his own time, his exceptional versatility was legendary, inspiring the popular "Bo Knows" Nike ad campaign, as well as two lackluster video games, THQ's Bo Jackson's Hit and Run! (AKA Bo Jackson: Two Games in One, containing both football and baseball modes) for the GameBoy and Data East's Bo Jackson Baseball for the NES. But Bo's name is probably most often brought up nowadays in connection with his appearance in Tecmo Super Bowl. "Tecmo Bo" was quite simply the most dominating video game athlete of all time.

The running back for the Los Angeles Raiders, Bo was so unstoppable that it was almost pointless to run any non-rushing play with the team. Against the weak AI, almost any ball-carrier could stay ahead of rear pursuers by zigzagging up and down as they slid just above or below your current position, but Bo Jackson didn't even need that. As the fastest player in the game, if he found a single hole through the initial wall of defenders, there would be no catching him on his way to a touchdown. Virtual Bo could literally run from end zone to end zone, leaving an entire defensive line gasping in futile pursuit. 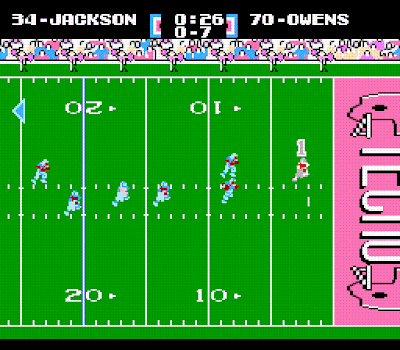 Indeed, the key to Tecmo Super Bowl's success and longevity was that the arcade elements made for a fun game that was as exciting as the real thing only pretends to be. When real-life players are described as "monsters," it is always hyperbole (unless they really are monsters, a la Michael Vick, convicted former operator of "Bad Newz Kennels"). A viewer with only passing familiarity with the sport is unlikely to recognize a seven-yard carry by Adrian Peterson as anything impressive.

I played the recent demo for Madden NFL 10, and the experience was an exercise in frustration. It would take multiple completed passes to make first down, and my most successful running play yielded maybe three yards. Of course, at the NFL level, the sport of football really does proceed in small increments, and a ninety-yard rushing play would be historic rather than routine. In my opinion, it's fine to aim for realism, but, in order to appeal beyond the market of hardcore sports maniacs, a title needs to offer gameplay accessible enough for players to feel that they themselves are the stars. I long ago gave up on my dreams of becoming a professional athlete; I don't need to face that same disappointment in my video games.

Bo Jackson was the best, but he was not the only player that Tecmo Super Bowl juiced into a superhuman video game character. A powerful fullback such as Brad Muster could leave unprepared would-be tacklers literally bouncing off him. Even with five men covering him, Jerry Rice would not fail to receive Joe Montana's pass. It was not uncommon for Tim Brown to take a kick return all the way. And key moments, such as diving catches or interceptions, were highlighted by cuts to dramatic cinematic animations. As a game, Tecmo Super Bowl's only really annoying flaw was the inability to switch players on defense once a play was active. Subsequent installments in the series would fix that, but those releases would not have Bo Jackson or other legendary players. 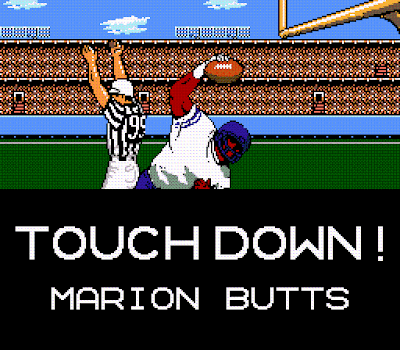 Back on the sim side of things, Tecmo Super Bowl also included such revolutionary features as a full season mode with stat-tracking, thirty-man rosters with substitutions and injuries, and customizable playbooks. Besides getting injured, players could also just have good, bad, or average days, as suggested by their fluctuating "Physical Condition" rating. This added a realistic factor of player mood and health to the season grind. Many sports games today don't even simulate this, or, even when players seem to exhibit streakiness, there is no related statistic disclosed to the player. The Pro Bowl was also in there, and unlike All-Star games in most sports titles even a decade later, it was actually possible to customize the lineups, reflecting the spirit of the event, which in real life bases selections partly on fan votes. You could also set up "COM VS COM" games, pitting the AI against itself in a contest theoretically determined purely by the numbers. It may not have sounded like a lot of fun, but people still simulate matchups with video games in order to settle bets. Alternatively, you could play games in "Coach" mode, wherein you watched from the sidelines as your team operated automatically according to the plays that you selected. All of this stuff was nearly unheard of when Tecmo Super Bowl was released, and some of it still isn't standard.

Not only do I consider Tecmo Super Bowl the greatest team sports video game ever, but I also like it quite a bit more than the real sport and league that it is based on. Even as I have come to loathe the NFL and its players, I have never stopped loving Tecmo Super Bowl. So I often wonder if video games in general should be recognized as sports themselves. Considering the success of "career" gamers like Fatal1ty and the huge national presence of StarCraft in South Korea, you might say that competitive gaming already is a sport.

What real football has that video football lacks, however, is the limitless human element. People watch hours of tedious sports in order not to miss the rare moments when they might see something real--those moments when competitors fight against all odds, all reason and push beyond themselves to achieve what should have been unachievable.

Yes, the video game players are also human, but they are limited in what they can achieve by the programming, which defines all that they can and cannot do. When a virtual batter knocks a baseball deep into right-center field, effort plays no real part in whether the fielding player will make the catch. Either he can or he can't get to it; there's no tapping the button harder or faster to get just a little more out of him. Even if that were a feature, there would have to be a defined upper limit to how many button presses the game would recognize. In those respects, a video game like Tecmo Super Bowl is really closer to a finite board game like chess, which, I realize, is also considered a sport by many. There are more sophisticated games, of course, whose limits may lie beyond human reach, and regardless of whether they fit everybody's definition of "sport," what's clear is that video games can be highly competitive.

Whether or not it could be considered a sport unto itself, Tecmo Super Bowl was simply a well-made video game, whose mechanics players could enjoy regardless of how much they liked football. Licensing issues will prevent it from ever being re-released in complete form (i.e. with all teams and players), but its legacy is evident in the many fans who still recite war stories of how they ran Bo Jackson just short of the end zone, then turned to run the length of the field the other way, ultimately going end-to-end multiple times on a single play, before finally scoring the touchdown to put the defense out of its misery.
Posted by Henry at 3:06 PM