I started the day off at noon by booting up my PS2 copy of The King of Fighters Collection: The Orochi Saga. I scrolled directly to King of Fighters '95 and set it to difficulty level 4 (out of 8)--the default arcade setting--because in my mind nothing less would be legitimate. I selected my team of Billy Kane, Robert Garcia, and Kyo Kusanagi, in that order. These three were not my favorite characters, nor my best in "real" versus play, but past experience had taught me that they were the most reliable for what I was about to attempt.

Combining the long reach of his low HP with the unique ability shared among Fatal Fury characters to inch forward while crouching, Billy could molest the AI from a safe distance and get cheap wins using just one move repeatedly. Robert Garcia had some of the best kicks in the game--useful for those times when all else failed and I would have to resort to random jump HK, crouch HK prayers. And Kyo Kusanagi's "Serpent Wave" (AKA "Orochinagi") was probably the best super move in the game, at least against the AI.

Round 1: My first opponent was the "rival" or "villains" team of Iori Yagami, Eiji Kisaragi, and Billy Kane. My own Billy got my team off to an early lead. When Robert's turn came up, I immediately started spamming his fireballs. Evidently, this was not one of those games where that tactic worked. The AI just used the dodge technique to evade every single projectile. Little matter, however, as that just meant I would have to jump kick them in the face instead, which is exactly what I did. I had no business with losers, so these slug-faces could hit the pavement.

Round 2: Next up was the "hero" team of Kyo Kusanagi, Benimaru Nikaido, and Goro Daimon. A mirror match was once again avoided, as Billy and Robert were enough to handle things. What boneheads! Didn't they realize they couldn't beat me with their one-pattern fighting?

Round 3: Team Fatal Fury was my third opponent. These were the strongest opponents yet. Not! Again, nothing much to report. I swept them aside with ease.

Round 4: After a cut scene announcing that I had beaten four teams, my next opponent was Athena Asamiya's Psycho Soldier team. Billy quickly took out opposing captain Athena, and while Chin Gentsai proved somewhat more troublesome, I still had a slim lead going into the final round with my Kyo against Sie Kensou. Kensou's anti-air breakdancing proved unexpectedly troublesome, however, and it actually took me two continues to figure him out. Dude was not without moves, but, c'mon, I was just too tough for a wimp like him.

Round 5: The stage intro animation of a lightning bolt exploding a tree announced that it was time to face Team Korea. I have always felt that Kim Kaphwan had the toughest AI of any of the normal characters. With that darned flash kick of his, he would consistently intercept jump attacks, which made up the bulk of my offense with Robert and Kyo. If I was going to beat this guy, it was going to have to be with Billy Kane. It took me four tries to do it, and that still left the other two members of Team Korea. When Chang Koehan took out Robert with just a few surprise hits, I started to get worried. I really didn't want to lose and have to face Kim again. I dug deep and Kyo beat the last two opponents by landing four consecutive Serpent Waves. And that's why he's on the team. I left those worthless weaklings burning in the fury of Kyo's flames.

Round 6: Team Art of Fighting was waiting for me next. After a sloppy first attempt, I beat them on my second try with little difficulty. I even proved I had the better Robert by catching the impostor mid-air with the legendary Ryuko Ranbu super. So long, weenie kings. We won't meet again.

Round 7: Team Gorgeous should have been another easy one, right? Well, things started well, as Billy dismissed Mai Shiranui with the usual methods. I somehow lost the lead when Yuri Sakazaki came in and took out Billy AND Robert. That left me only Kyo, and nothing went right that round, as the nearly dead Yuri just went nuts and basically beat my entire team by herself. It took me four continues to get by this team, but there was no one girl proving especially troublesome. They would just take turns fighting wildly, until I finally managed to subdue them with Kyo's supers. I used the Serpent Wave to defeat Yuri, and the force of the attack even blew her clothes off. King suffered the same fate in the next round, losing her blouse in this gimmick carried over from Art of Fighting. Yes, the Fatal Fury characters get to walk forward while crouching, while the Art of Fighting females get to have their clothes blown off upon defeat.

Round 8: I faced Heidern's Ikari team in the finals. Easy. Billy did most of the work, taking out both Ralf and Clark by himself. Was that it? Well, I wasn't angry, just disappointed.

The main event was set to begin, as the bosses took the stage at last. Saisyu Kusanagi, the brainwashed father of Kyo, was up first.

I remembered this guy mostly as a warm-up for Omega Rugal, but Saisyu was ruthless today. Sharing the same basic fireball-uppercut command list as Kyo, he shouldn't be that tough, but he also has a hard-to-read special that looks just like his dash, does tons of damage, and has to be blocked standing. Billy's tricks worked some of the time against him, but if Billy fell, a sweep of my team would very likely follow, no matter how much of a lead I had. This match really showed off the reactive AI of this game. This is not a genuine single-player action game, of the sort where you wait to observe and exploit a pattern. The KoF '95 AI only uses whatever attacks are appropriate based on what the player is doing, and Saisyu has moves for every situation. Getting by him is not a matter of finding his weakness, but rather of getting lucky and nailing him when he somehow isn't paying attention.

After about ten tries, I finally prevailed against Saisyu, only to be reminded that, despite a between-fights cut scene, Saisyu and Omega Rugal were a team. I would have to beat the both of them with no health refill or continuing in between.

Rugal decimated the shabby remains of my team before I could even get a feel for the match. But I could tell that neither Billy nor Robert were going to break through Rugal's dominating attacks, and Saisyu was already too careful to be caught by Kyo's super. I tried changing up my team by subbing in nearly every character. I finally found a better match for Saisyu in Athena--her Phoenix Arrow worked about a third of the time, as opposed to Billy's pokes working a quarter of the time--but I could find nothing effective against Omega Rugal.

After about thirty more continues, most of which did not even see me reaching Rugal, I had to concede that I was not going to beat these guys head-on. My only chance was to win by time-out. In fact, I'm not sure I've ever beaten the game any other way.

So the strategy was to beat Saisyu with Athena, then hopefully do at least some damage with her against Rugal, though that wasn't absolutely necessary. With Mai Shiranui as my second, instead of trying to fight Rugal, I would run the clock using her off-the-wall dive attack to fly back and forth across the screen. Even if Rugal had full health at time-up, as long as Mai never got hit either, my third character would win the match for me by default as the last man standing.

Alas, my technique was not as sharp as it used to be, and I would find myself too often diving the wrong way or not at all. It was hard to keep running for the full sixty seconds of a round, and one mistake usually meant Rugal would catch and pulverize me. That was how the next dozen attempts went, not even including the many times when Athena would fail to defeat Saisyu, and I would consequently have to play the run tactic against Saisyu, against whom it invariably failed just as spectacularly.

So, many, many continues into this puffed-up war story, when came the moment when I finally found the answer and arrived at a dramatic finale to what would go down as one of the greatest contests of all time? No, that's not what ended up happening.

I looked at the clock and realized it was nearly four o'clock. It had been four hours since I had started playing. Perhaps another two hours would have finally brought me that perfect break, where both Saisyu and Rugal would fall asleep one after the other. But would it have been worth it? Did any of this even really matter anymore? No, it was time to shut it down and pack it in. I was not going to beat this game today. In all likelihood, I was never going to beat it again. I was now too old for this. I no longer had that happy ending within me.

But, no, it is not an overwhelming loss that I feel upon having to retire from this fight after all these years. What had started out as a joke now revealed a truth of life that I would have to come to terms with. I suppose I always knew this day would come, but indeed nothing lasts forever. That's a part of the journey, and it's time to move forward, rather than continue clinging to the past. That lesson is ultimately more valuable than the immediate gratification of a transient victory would have been.

(Or maybe I'll just load up KoF '95 on my PC, turn on invincibility, and cheat my way through.) 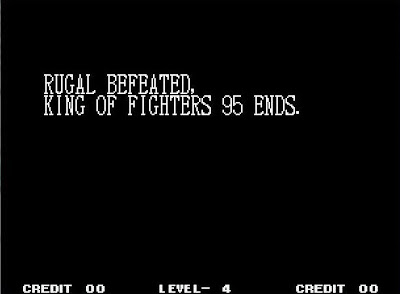 I'm not sure if I understand. Is the idea here that you were giving the game one last hurrah, and trying to see if you could still beat it at the same difficulty as back in your heyday?

The idea is that I used to beat this game about once a year, but, with this most recent performance, the tradition has likely come to an end.