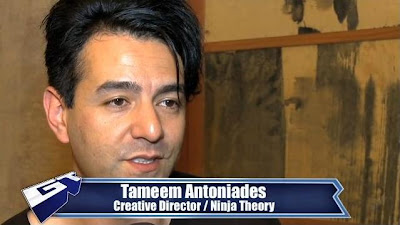 Up above is the man in charge of the new UK-developed Devil May Cry.  You can go to GameTrailers to hear him talk about the inspirations behind Dante's radical redesign.  Or you can not waste your time, and instead just take a look at his mop.
Posted by Henry at 7:04 PM No comments:

Funny Name of the Day

Gugu (short for Gugulethu) is the star of NBC's new spy series, Undercovers.  I'm not sure whether s/he's the dude or the chick. Show's lame anyway, so what does it really matter?

(In all seriousness, please forgive my lameness, Gugu, even though I bet you're a good sport and perfectly cool with it.)
Posted by Henry at 7:12 PM 1 comment:

3 Games That Would Play Better In 3-D

I don't personally view 3-D as a revolution in visual media, but I'm also not ready to just glibly dismiss it as a passing fancy, and I firmly believe that it still has a lot of as-yet-untapped potential.  I think 3-D should hold more meaningful applications for gaming than for film, and I even believe that it could be more gracefully implemented than motion controls.  Motion controls tend to be a disaster when lazily forced into traditional gameplay models, and even the more groundbreaking Wii Sports titles haven't really entertained me as well as good traditional games.  But I can think of a couple existing games that could be subtly yet significantly improved by 3-D.


Contra 4
(This can probably be applied to the original Contra as well, but I'm sticking with Contra 4 because it's fresher in my memory.)

As in the first Contra, there are stages in Contra 4 that switch you to a behind-the-back perspective.  Forward progression is automated, so the player is only really running or jumping side-to-side while fighting the enemies ahead.  Most enemy attacks are best avoided by dodging left or right well in advance, but there will be moments when you're faced with a row of barrels rolling toward you that spans the entire length of the stage.

Ideally, you should just fire on and destroy the barrel in your immediate lane, but if you're too slow on the draw and don't have enough firepower, you may have to jump the wall of barrels as it passes into the foreground.  This can be somewhat tricky because it is harder than it should be to spot how near or far the barrels are from you.  You know that the player character is in the foreground and the barrels' origin point in the background, but with only the illusion of depth achievable on a flat image, it can be difficult to track the barrels as they move between layers.  If you jump too early, you may just land on the barrel, whereas if you wait too long, you'll be dead before you leave the ground.  Also keep in mind that there will more than likely be additional pressure coming simultaneously from enemy soldiers firing bullets at you. With 3-D to make the barrels and other active elements pop out better, there would be less needless guessing and, consequently, less frustration.


Star Wars Rogue Squadron II: Rogue Leader
This is like the previous example, only to a much greater and more serious extent.

In the Rogue Squadron games, you are always flying forward from a behind-your-craft perspective, so that false depth is an ever-present issue.  But it is never more a hindrance than in the Death Star stages in Rogue Leader.  The first one has you making the classic trench run, just like in the first movie, only now they've added all sorts of pillars and crossbars to get in your way.

Death usually accompanies any impact, and, at the speed at which the game moves, you're not left with much time to gauge where these obstacles are and dodge accordingly.  Unfortunately, even though Rogue Leader is built on polygons, everything still looks pretty flat on the TV screen, and thus it's harder than it should be to pick out those hazards as they approach.  Essentially, they are like the barrels from Contra 4, but faster and more numerous.


NBA Jam
Actually, any basketball game could benefit from 3-D.

Back in the day, in most any basketball game out there, I could probably have gone through the season mode and averaged 200+ points, 40+ steals, and maybe even 4-5 blocks (that's only counting blocks by me, not my AI teammates) in five-minute quarters.  The one category where I always performed below what was realistic, however, was rebounding.

In my defense, I tend to have a high shooting percentage, so there aren't many offensive rebounds for me to go after.  Meanwhile, on defense, I try to always get the steal before my opponent can even attempt a shot.  But the real problem is that, once that ball graphic is in the air, it's always very difficult to track its position in the pseudo-3-D space.  In the older 2-D games, part of the problem was that the ball sprite itself often would not scale according to its distance from the foreground, but even in the polygonal games, it's again that issue of multiple planes of play effectively having to be pancaked onto a flat screen.


Of course, I have no desire to see 3-D completely take over, or even to see games that require 3-D.  It should never detract or distract from the core experience of a traditional game.  But 3-D can help sometimes, or at least it can be a nice bonus, should the player choose to take advantage of it.  Like surround sound.
Posted by Henry at 10:37 AM No comments:

It was not long ago, on this very blog, that I was saying that I didn't think Dante was cool anymore.  Now, as if in response to that, Capcom has unveiled a brand new Dante. 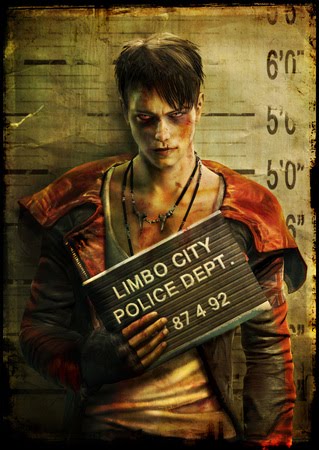 This emaciated, vampiric Dante will be starring in DmC, a series reboot from English developer Ninja Theory (Heavenly Sword, Enslaved).

At this stage, it's really too early to tell if this is an improvement or not.  I kind of dig the new, more urban duds.  His signature bold red is still there, but it's more subdued, and the overall ensemble is sleeker and less showy, more casual--a good fit for his lankier frame.  Check out the trailer, and you'll see that Ninja Theory's take still has all the right moves (no actual gameplay footage, however) and retains at least some of that swagger that DMC2 Dante was so sorely lacking.  The hair and face are startling, however, and I'm not sure how I feel about that.

Setting aside good or bad, it's just shocking that Capcom would essentially jettison (or allow Ninja Theory to jettison) the iconic look of one of its most recognizable characters.  That they had to bring in Nero with DMC4 already suggested that maybe the material had run its original course, and the series was due for a hard reboot.  I would have been okay with tossing all the existing mythology and supporting characters (Trish, Lady, Nero, Vergil), but here they have seemingly gotten rid of Dante himself, replacing him with a different guy who only happens to have the same name.  What makes this weirder is that the old Dante (in his DMC3 incarnation) and Trish are going to be in next year's Marvel vs. Capcom 3, giving the impression that Capcom itself isn't clear on its direction for the franchise.

The trailer is somewhat ambiguous, so I suppose it's possible that this guy is just some psychotic who only thinks he's Dante.  If the "real" Dante shows up later, in a similar capacity as he did in DMC4, then that could even be a cool twist.  Of course, Hideki Kamiya will tell you that the only "real" Dante is his DMC1 self (although I'm not sure how much of a hand Kamiya really had in designing Dante in the first place).

Whatever.  Mixed feelings on new Dante aside, the trailer looks, yes, cool, and I'm looking forward to seeing more.  Honestly, I'm more worried whether Ninja Theory will be able to capture the deep combat of the series's better installments.  I played a bit of Heavenly Sword, and it seemed pretty shallow to me.  On the other hand, a more mainstream, casual Devil May Cry might not be a bad thing, so long as it's not like DMC2.
Posted by Henry at 11:18 AM 2 comments:

Yes, someone actually went ahead and made a live-action The King of Fighters movie.  Yes, I've seen it.  Yes, it's awful.

The Good (or just okay):

Dear Future Publishing,
In Volume 222 (December 2007) of Nintendo Power, on page 17, the "News" section reported  that The King of Fighters Collection: The Orochi Saga for the Wii would contain KoF '95, '96, and '97.  As a long-time fan of SNK's historically underappreciated fighting games, I was certainly pleased to hear this, especially since, as your well-researched story noted, '96 and '97 had never been released on North American consoles outside of the prohibitively expensive Neo Geo.
I was disappointed, however, at the glaring error of the accompanying screenshot.  The featured shot is not of any of the titles comprising The King of Fighters Collection: The Orochi Saga.  Rather, it is a picture of the first Fatal Fury, one of the Neo Geo's earliest titles, which is four years older than the oldest title in the collection.
You can tell by the archaic graphic of Terry Bogard's "Power Wave" attack, the very same sprite that appears on page 24 in a screenshot for the Virtual Console release of, you guessed it, the original Fatal Fury.  Even more telling is the fact that Terry's opponent on page 17 is Richard Meyer, one of SNK's lesser-lights, whose only other playable appearance was as a bonus character in the recent The King of Fighters 2006.
Although the titles in The Orochi Saga are themselves plenty old now, they represent the prime of the Neo Geo hardware's life, and this erroneous screenshot is misrepresentative in an unflattering way.  While I am glad to see any mention of SNK in my favorite gaming publication, it was unfortunate that it had to be accompanied by such an obvious mistake.  Hopefully, upcoming releases on the Wii will give SNK some deserved exposure that will help to prevent such oversights in the future.
Sincerely yours,
Henry
Posted by Henry at 9:15 PM No comments: