The Theory of Everything (James Marsh, 2014) 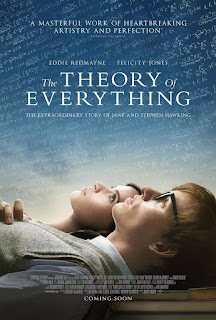 I didn’t realize until the end credits that this biopic of Stephen Hawking was actually based on the autobiography of his first wife, Jane Wilde. That explains why the film seems so much more interested in their domestic drama than in his seminal insights toward the pursuit of a “theory of everything,” or in the breakout success of his own book, A Brief History of Time, which established him as the most widely recognized scientist of his generation. And I can appreciate, certainly, that her memoir, about the trials and tribulations in courageously holding together a marriage and family through his unrelenting physical deterioration, must have proven far more adaptable to a mass-appeal, Oscar-baiting motion picture than might have any of Hawking’s non-narrative publications.

It is an admittedly affecting film, buoyed by the late Jóhann Jóhannsson’s score, and by Eddie Redmayne’s Academy Award-winning performance as the male lead. For better and worse, this was the part that inspired the actor’s pivot from period drama role-player to the creature of extreme and constant physicality and theatricality that now headlines those Harry Potter prequel movies. I find him rather like a loaded gun in the hands of his agent and casting directors. The weapon itself is conscienceless and indiscriminate, tragic when mishandled. But when he is attached to the right projects, the results are astonishing. Though I’ve heard praise for Benedict Cumberbatch’s turn in 2004’s Hawking TV movie, it’s hard to imagine another actor inhabiting the role as Redmayne does here, transforming incrementally over the course of the film to vividly depict a man afflicted by rapid physical decline yet still possessed of brightness and mischief. Granted, as the movie goes along, there is arguably less and less demanded of Redmayne, and obviously he doesn’t do the signature voice (though I don’t doubt he would have been happy to try).

Even without knowing that the film was based on his first wife’s book, I was most curious to see how it would handle the end of their marriage. Every account I’d heard of this episode in Hawking’s life had portrayed it as one of his more ignoble chapters—basically, as his celebrity grew and attracted hordes of flatterers and groupies, he meanwhile grew weary of his long-suffering saint of a wife. The movie does not contradict any of that, though its politeness invites skepticism (and this is a point on which the film apparently diverged from Jane Wilde’s book). Elaine Mason, his nurse-turned-second wife, is charming as played by Maxine Peake, though not explored in any depth here.

Hawking’s celebrity is mostly incidental in this telling of his story, and science only slightly less so. The result manages to both humanize and dehumanize him. Certainly, Felicity Jones as the tirelessly self-sacrificing Jane Wilde, persevering by love and faith through circumstances that would topple most men, makes for a more readily moving story than lectures on theoretical physics that most of us would scarcely understand and never apply. And it’s not as if a person needs to be famous and/or a scientist in order for their story to be worth telling. Still, so much of the movie is concerned with questions of how Stephen and Jane cope with his disability. How will he take to having to use a wheelchair? How can he be her partner in parenting their children? Who can they turn to to relieve her from having to be both spouse and sole caregiver? I can’t help but feel that all reinforces the average moviegoer’s notion of Stephen Hawking vaguely as that scientist who is really really smart, but mainly as that guy leaning back in the wheelchair with the robot voice.
Posted by Henry Fung at 9:48 PM No comments: