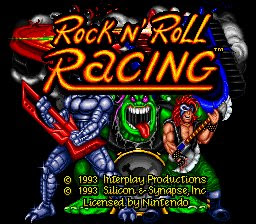 Released in 1993 for the Super Nintendo Entertainment System, Interplay's Rock 'N Roll Racing was a jazzed up R.C. Pro-Am clone, something I would only learn years later. Developed by Silicon & Synapse (lately Blizzard of World of Warcraft fame), it was an isometric combat racing game with a sci-fi theme and rock soundtrack.

The game featured six selectable racers (plus one secret character), each hailing from a different planet. They hit most of the usual sci-fi cliches: reanimated cyborg, mohawked wasteland punk, Ewok-esque mutt-man, feline femalien (named Katarina Lyons, no less!), etc. My character of choice was the Vulcan-like Tarquinn. There was no story whatsoever in the game, nor were any of the characters visible during races, so the only differences were their stats. 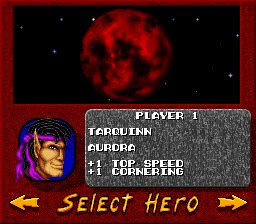 game's four graded categories: top speed, acceleration, cornering, and jumping. Between the six characters, every combination was covered, but anyone who relied on jumping was at a stiff disadvantage, as only the weakest cars in the game came with jumping maneuvers. Later cars ditched this useless ability for the more effective Lightning Nitro boost. Even cornering became a negligible stat once the last car, the Havac, became available and made perfect turns a breeze for everyone.

Instead of a simple Grand Prix, the regular campaign had the player earn his way to each new planet by winning cash through race victories. Money earned would also be spent buying parts and ammo or brand new cars as better ones became available. There was no battery-based saving, so players had to rely on a cumbersome password system to record progress. When the player finally won his way off the sixth and final planet, a highlight reel of the racer's victories set to "The Peter Gunn Theme" would be shown. Sadly, these highlights were the same for every character and did not actually reflect the player's performance. Curiously, even with that being the case, every time I used Nintendo Power's password to cheat my way straight to the last planet, the game would end with "The Peter Gunn Theme" accompanying a black screen, as if the game was drawing a blank because I didn't have any recorded data to draw from, even though the highlights never drew from saved data anyway.

A somewhat unusual inclusion was the option to play through the campaign with two players. While a nice idea, it came with a number of problems. Neither player could progress to the next planet until both earned enough money. Because there were only a limited number of races to achieve this before the scheduled flight to the next planet, precise divvying up of the spoils was required. Even though, officially, there was no "team" racing, both players would be forced to work together to ensure that each got the sufficient number of first place finishes.

Interestingly, each player received a separate password, and the system could be abused for some strange results. Both players could, for example, enter the same password, leading to clone racers. Alternatively, a player with a password for the last planet could play with a player still on the first planet, with the result being that both players would end up on the earlier planet, but the further advanced player would retain his undoubtedly superior vehicle and consequently dominate the competition. 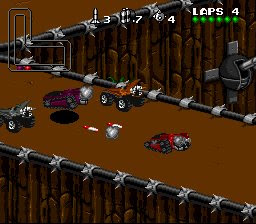 While the campaign was a meaty and challenging experience, the real attraction was the versus mode, where two players could race freely on any planet and with all cars fully upgraded. Nearly every race against my brother began with both of us boosting off the starting line while unleashing the entire payload of forward and rear weapons. More often than not, we would both be wiped out, taking the CPU racers with us, so there was no real advantage to be gained. Rather, it was necessary because failure to go all-out would mean conceding an early lead, as neither of us could ever trust the other to hold to any friendly ceasefire agreements made prior to the race.

I recall one time when I deliberately waited a half-second before accelerating at the start, allowing me to avoid the blitz and snipe the other cars safely from behind, much to my brother's shock and fury. That strategy went out the window, however, any time the Havac's homing Sundog Beams and Scatterpack mines came into play. And, in versus mode, there was little reason to use anything but the Havac.

Nearly as impressive was "Loudmouth Larry" Huffman's active commentary, consisting of colorful remarks (e.g. "Tarquinn unleashes hot fury!") delivered continuously throughout the race. This was about as sophisticated as commentary got in the 16-bit generation, and it was actually a good deal ahead of any contemporary sports games.

When I was a kid, Rock 'N Roll Racing was my favorite video game, but, as I grew older, I found myself somewhat frustrated with it. My biggest problem was that, in a fair race between players of comparably high skill levels, there was no way to mount a mid-race comeback. As soon as one player made a mistake or got a bad break, the other player could pretty much coast to the finish line. All of the pressure would be on the pursuing racer to try to catch up, which was theoretically impossible, since, with weapons having such limited range, the only way to really close the gap was to make better time, which could only occur if your opponent was worse than you. If the deciding mistake occurred early in a race, this meant you'd be racing several laps of anticlimax. This realization would end up souring me somewhat on racing games as a genre.

That said, if you take it less seriously as a competitive platform and more so as a party game, it's still a lot of fun, and I can only imagine the mayhem that would ensue if there were ever a four-player racer in this style.

Blizzard developed a Genesis version, again published by Interplay, about a year after the SNES one. In addition to being uglier and not having enough buttons--boosting was performed by double-tapping accelerate--this version sounded awful due to the hardware's inferior synth quality. Not only were the songs massacred, but, every time Larry spoke, the music would abruptly fade out until he finished. The inclusion of a weak rendition of Golden Earring's "Radar Love" was scarce compensation.

In 2003, Blizzard released a straight port of the game for the Game Boy Advance. Multiplayer was no longer splitscreen, but that wasn't much of an improvement considering how unwieldy the wired multiplayer setup for the GBA was.

A 1997 sequel called Red Asphalt was released on the PS1, but I know nothing about it besides the name.
Posted by Henry at 11:52 PM

The beginning of race unleashing of hot fury is one of my definitive greatest moments of gaming, up there with the Ammo Nation siege in GTA3. Neither, perhaps, was anticipated by the games' producers, at least not initially. The seeming "discovery" of such techniques/moments was a large part of why they were so great.