Well, Dragon Quest VIII is over and done with. The last twenty hours were actually pretty easy once I synthesized the right items, and the final boss, while a tedious affair, never really threatened me (well, except when I accidentally selected "Flee," and, instead of simply telling me that it wasn't an option, the game forced me to watch as my party absorbed a round of unanswered attacks). The ending was satisfying enough, though it suffered the usual problems of having a mute protagonist in a genre that leans heavily on plot and character.

Quite a relief, I must say, to get that off my back after two years and over seventy grueling hours. In the past, it has often been bittersweet having to part with a game after such a long attachment. Charming as it was, however, I'll happily say that I'm never going to play this game again, bonus dungeons be damned. I don't feel my time was wasted, but I still can't really recommend it to anyone without a lot of time and patience. 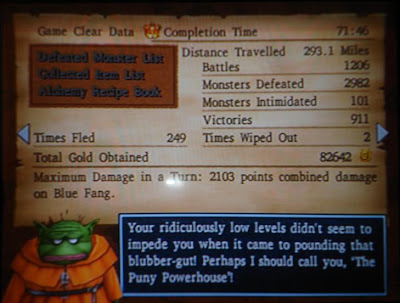 Good riddance to bad rubbish. To hell with Yangus and the horse-woman he rode in on!