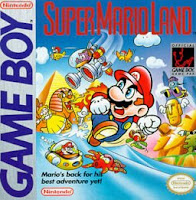 Released in 1989 as a launch title for the original Game Boy, Super Mario Land might have looked like a miniaturized version of Super Mario Bros., appropriately stripped down for handheld consumption. Certainly, it must have been Nintendo's intent, in marketing the Game Boy as a portable version of its massively popular Nintendo Entertainment System, to release alongside it a version of its signature title. Thankfully, the game's designers, led by producer Gunpei Yokoi rather than Shigeru Miyamoto, had far greater ambitions. Far from being a dumbed-down port, Super Mario Land was an original title that retained the fundamental gameplay of the NES classic in brand new levels, while adding some unique features that set it apart as a classic in its own right.

The plot was basic, somewhat nonsensical, and familiar yet completely unrelated to previous Mario titles. The alien Tatanga had kidnapped Princess Daisy of Sarasaland, and it was up to Mario to rescue her. Almost none of the characters or settings would recur in any future Mario titles. It was only years later with Mario Tennis on the N64, when the necessity for more playable characters led Camelot to dig back into the archives, that Daisy finally became an established peripheral character.

While the game was black and white, its worlds remain among the most colorful Mario has ever visited. Its four kingdoms exhibited a thematic diversity beyond other Mario titles, with exotic locations based on Egypt, China, and even Easter Island. Enemy variety would change accordingly, and, rather than facing just the usual assortment of koopas, Mario would do battle with bugs, sphinxes, seahorses, robots, and Moai heads. The basic goomba and koopa did appear as the Chibibo and Nokobon respectively, and the Nokobon's shell, rather than becoming an exploitable weapon, would explode shortly after stomping on the turtle's head. 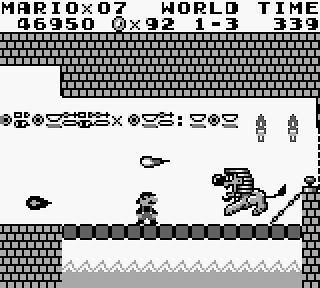 Mario would also visit an aquatic world, and it was there that the first of two vehicular shooting stages occurred. Putting Mario at the helm of a torpedo-equipped submarine, it played like a rudimentary horizontal shoot 'em up, automatically scrolling to the end of the stage, where an oversized boss waited to be shot down. The final level of the game repeated the format, with Mario piloting an airplane in pursuit of Tatanga's spacecraft, which would have to be brought down with the plane's infinite supply of missiles. A rather dramatic shift from the platforming gameplay found in the rest of the title and series, these oddities were the highlight of the game for my six-year-old self. They were breezy affairs, thanks to the crafts' high speed and mobility, which allowed Mario to easily outmaneuver his weak enemies. The greatest danger was getting careless and finding yourself stuck behind a wall as the stage scrolled you off the screen to your demise. As a kid, I think what I appreciated was the feeling of being powerful in the context of a game where I had been so limited in my abilities the rest of the time. Really, these stages felt like rewards for making it through the levels leading up to them. 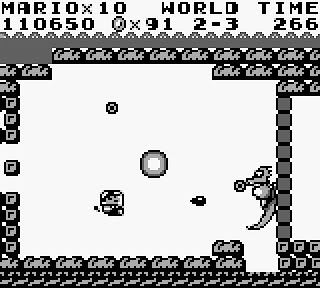 Shooting stages aside, the basic gameplay was very faithful to Miyamoto's original design, though it was slower and the controls less slippery, making for an easier experience overall. One key difference was that, instead of the fireball ability, the flower would grant Mario the more versatile superball, which could rebound off surfaces for tricky sniping shots, collecting any coins it touched along the way. With only twelve levels total, it was a small game and also completely linear, which was probably appropriate, both for the short session nature of the handheld platform and for the younger audience the Game Boy was likely to attract.

Beating the game unlocked a second, more difficult course, featuring more enemies and trickier enemy placement. Completing this harder mode then unlocked a stage select feature. Unfortunately, since data could not be saved, all of this had to be accomplished in one sitting, and once the Game Boy was powered off, all progress would be lost, rendering the ultimate reward somewhat useless, as, by the time the stage select became available, the player would have just experienced everything in the game anyway. Even so, I did the consecutive playthroughs on multiple occasions, specifically to unlock the stage select, just so I could replay the shooting stages over and over again.

In addition to being one of the first games I ever played to completion, this was really the game that got me into gaming in the first place. I had played Combat on the Atari 2600, but, looking back, I think the pleasure of that experience derived from the childish conceit of assigning narrative to even the most mundane of activities, rather than from any legitimate enjoyment of the gameplay. And, while my family owned an NES, it was really more my older brother's thing--I only occasionally played Duck Hunt. It wasn't until I got some alone time with Super Mario Land on the cozy Game Boy setup that I really understood how engaging video games could be, as I found myself tuning out the world around me, while I devoted my attention entirely to this tiny adventure. For all intents and purposes, this was the genesis of my gaming history.

The debate continues to rage over which is the best of the traditional 2D Mario titles: Super Mario Bros. 3 or Super Mario World. Personally, I always favored the purer experience of the original Super Mario Bros. over either of those, but my personal favorite will always be Super Mario Land, which has always struck me as a more varied and refined version of Super Mario Bros. It's a real shame that it isn't more celebrated among fans nor seemingly by Nintendo, who has never ported, remade, or collected the game for any other platforms. With the debut of the DSi, there has been speculation that there might be plans for a portable version of the Virtual Console for classic Game Boy games. The game holds up quite well, I must say, and I would certainly welcome such an opportunity for more players to discover its charms.
Posted by Henry at 11:42 PM

So, the game isn't celebrated by Nintendo, and it was made by Gunpei. Hmm, I guess I don't see the connection . . .

The shooting stages in Super Mario Land, I believe, prefigured the final stage of Devil May Cry, which upended all of that game's gameplay up to that point.

"This was the genesis of my gaming history." Hmm, pun?

It's true, SML is the king of Super Mario games. What other Mario game could you even sit there and legitimately say, "I did the consecutive playthroughs on multiple occasions." I mean, yeah, I beat SMB3 in like ten minutes, but it was more a novelty experience than anything. And I may like Yoshi's Island more, but that's not a true SMB-mold game.