My introduction to JoJo's Bizarre Adventure was the Capcom 2D fighting game. The story of the Joestar family's blood feud with the vampire Dio Brando, the game was actually based on the third arc of Hirohiko Araki's influential Shonen Jump manga. The manga also inspired a 1993 anime series, as well as a 2001 prequel to that series. Tragically, sales of both the manga and anime were halted upon the discovery just this year that a scene in the anime casually included a reproduction of a page from the Qur'an. For the already tiny U.S. distributor of the localized anime, the inability to continue producing their one product meant the end of the company. As soon as I heard the news, I made sure to pick up the entire series on DVD before it became impossible to find. 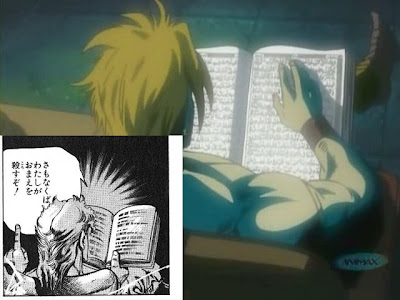 The 1993 direct-to-video series, or "original video animation" (OVA), is a true classic for fans of hardcore fighting anime along the lines of Fist of the North Star. While unmistakably of an older vintage in its somewhat sketchy yet highly detailed art style, it boasts high production values, with fluid animation somewhere between a film and a television series. With only six episodes to adapt a manga that originally comprised seventeen volumes, the story is heavily-abridged and even starts abruptly about halfway through the arc, with hardly any exposition to place the narrative. Its target audience must have been fans of the manga, eager to see their favorite scenes in animated form.

The main hook of the series is the concept of the "Stand," the phantom manifestation of a character's spiritual power. While the heroes' Stands are fairly straightforward fighting types with humanoid forms, the villains all have hidden Stands with horrifying abilities. Every encounter involves the heroes getting ambushed by an agent of Dio, at which point they must scramble to determine the nature and extent of their enemy's Stand power, before they can formulate a strategy to fight back. In typical shounen fashion, there is a heavy emphasis on explaining the characters' exact strategies and techniques throughout the back-and-forth progression of each battle. Luckily, JoJo's fights are among the most thrilling in manga/anime, thanks, not only to the extreme violence, but also to the consistently clever resolutions utilizing the diversity of abilities on display.

The 2001 episodes, on the other hand, are borderline unwatchable. Not quite a genuine prequel, these episodes were produced to "complete" the adaptation, making for one whole program suitable for distribution to a U.S. audience unfamiliar with the manga.

Despite some attempt to maintain the style of the older episodes, the difference is immediately obvious and rather jarring. While the newer series is cleaner-looking, benefiting as it does from modern digital techniques, it is also clearly working off a lower budget, as evidenced by its lengthy stretches of non-animation, where characters just stand around, not even talking, but just staring each other down in a weak facsimile of tension. This results in a plodding pace, as very little occurs through the seven episodes. Quite the opposite of the necessarily-packed 1993 series, the newer episodes seem to have too much time to cover too few developments, though, in fact, volumes of material remain unused.

Even without the Islam issue, JoJo's Bizarre Adventure seemed to struggle to find an audience in the U.S. Whatever the result of the current inquiries into its suitability for distribution, I expect it will be disappointing as regards its future prospects here. That's too bad, as the 1993 series truly is a classic, worthy of attention for any fan of fighting anime.
Posted by Henry at 11:12 PM