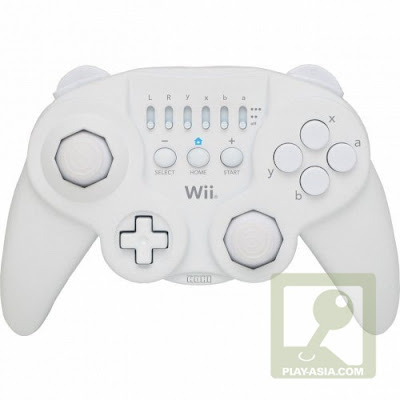 I just had to post about this, because it looks completely awesome.

Best known for their arcade-style joysticks, Hori is easily the leading third-party manufacturer of gaming peripherals for consoles. I own one of their SNES-style GameCube controllers, and it's a pretty sweet way to play GBA games on the Game Boy Player. Their products are always officially-licensed, so, in addition to looking nice, their parts are just as solid as first-party goods. While most of their stuff is import-only, peripherals aren't generally region-locked.

That said, as an alternative to the Classic Controller, this doesn't really pose any practical advantages. If the D-pad is as lousy as the GameCube controller's, this would actually be a worse option for most Virtual Console titles. It's just too bad that the Classic Controller input, which I assume this utilizes, cannot be used for GameCube games on the Wii. I'd give anything for a wireless, rumbling GameCube controller for use on the Wii (or GameCube, for that matter).
Posted by Henry at 10:05 PM

Yep, that's a Hori all right.