Developed by Factor 5 exclusively for the Nintendo GameCube, Rogue Leader was the successor to their N64 hit, Rogue Squadron. Like its predecessor, it was a starfighter-based action game set during the original Star Wars trilogy.

Released alongside the North American launch of the GameCube in 2001, it immediately set the technical benchmark for the system. At the time of its debut, the most sophisticated console in my house was still the N64, so, seeing the first film's climactic attack on the Death Star stunningly realized as a video game in full laser-filled glory, I was blown away by the epic scope and volume of the action. The otherwise lackluster launch lineup of the GameCube was of no concern in the face of this killer app, which seemed a cut above anything on the PS2. Even by the time that generation came to a close, Rogue Leader remained one of the system's most visually-impressive titles, a true testament to Factor 5's mastery of the hardware.

While set during the original trilogy, placing the player in the alternating roles of Luke Skywalker and Wedge Antilles, there was virtually no story to be found in the campaign, which consisted of ten mostly standalone missions, not including a handful of unlockable bonus stages. Instead, the player would be thrust into each mission with some brief text and voice-over to explain the objective. 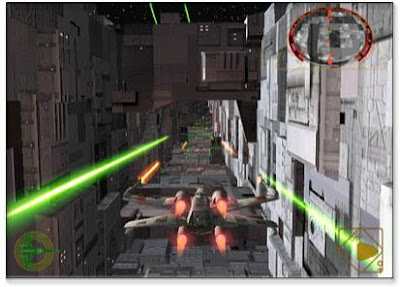 Clearly, the game was designed for players already familiar with Star Wars, but, considering the franchise, there was probably no fear of limiting the audience. The ability to experience the legendary battles of Yavin, Hoth, and Endor was a dream come true for any fan, and, for the most part, the stages representing those moments did not disappoint. Some liberties were taken with the opening mission, "Death Star Attack," as arbitrary columns and crossbars littered the trenches, forcing the player to maneuver around them in what amounted to a Paperboy-esque obstacle course. A tad ridiculous, yes, but perhaps the developers thought it would be too easy otherwise.

The Battle of Hoth was expectedly a highlight of the game, as it has been with every Star Wars game that has included it. Sadly, as exhilarating as it was to take down AT-AT walkers with the snowspeeder's tow cables, that element of gameplay, more than any other in the game, also revealed the ultimate limitations of the hardware. As soon as the tow cables were successfully cast, the game would cut to a stock sequence of the AT-AT falling weakly on its side. With multiple walkers to be taken down in that stage alone, the repetitiveness of the non-interactive sequence would quickly wear down the immersive integrity of the experience. 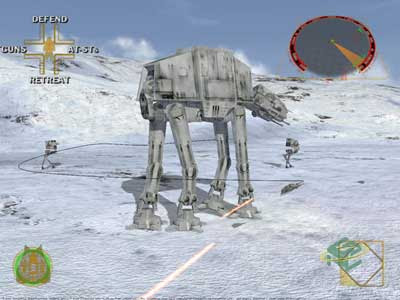 Fleshing out the campaign, more than half the game was original material not taken from the films, though some were set in locations from the movies. While not as memorable as the movie missions, they provided needed variety, with gameplay that included taking the Y-wing on bombing runs, escorting Rebel transports through enemy ambushes, defending tibanna gas platforms on Bespin, and even a stealth mission. One of the game's coolest features, a few of these stages actually read the GameCube clock and adjusted between day and night versions accordingly, sometimes introducing drastic changes in how they played out. The stealth mission, for example, was much more easily accomplished under cover of darkness.

My personal favorite stage was the Battle of Endor, where transpired one of the most remarkable moments in my gaming history. The most epic stage in the game, it had the player facing down a pair of Imperial Star Destroyers. The space battlefield ambiance here reached its pinnacle, with incidental explosions occurring all around, while Admiral Ackbar and Lando Calrissian yammered on meaninglessly in the background. As for that moment I alluded to, I wasn't even the one playing when it occurred.

I was watching my brother go for a high score. He had grown quite obsessed with the game and had already gone through the stage several times, but this was the first time I had seen him play it. With days of practice behind him, his run-through was as mechanically precise as I had expected. That is, until he nonchalantly crashed his own X-wing into the bridge of a Star Destroyer, taking out the enemy with him, while I stood dumbfounded. My brother then explained that doing so saved him time on his score, while the loss of his already depleted X-wing would not count against him in his quest for the highest ranking. While his explanation made logical sense, it hardly did justice to the transformational moment I had just witnessed. The game had not instructed nor even hinted at such a tactic. I wasn't sure if its inclusion was even intentional, as it was, after all, unthinkable.

I immediately began to wonder, what if there were a game that did feature such an extreme circumstance, where victory seemed so impossible that the player would be forced to turn to that unthinkable option as the only solution? What if, without being told to do it, the player could come to the realization that willing self-sacrifice was the only way to "win" the game? And what if the loss of that video game avatar carried feelings of consequence, in the context of the climax of a game that actually had a story and characters? What if, in other words, there were a video game that used conflict in a way that allowed the player to do something truly noble and heroic, instead of just murdering people and blowing things up?

Well, Rogue Leader was not the game to answer those questions, nor do I believe that its developers ever even intended to raise them. Still, I was amazed that it allowed a kamikaze run at all, let alone as a viable tactic.

The gameplay's biggest problem was the physics, or, in some cases, the lack thereof. With the space-based missions, it was very difficult to gauge depth and distance in the weightless infinity, and, with free movement in a fully three-dimensional environment, I often found myself wandering, or at least feeling like I was. Meanwhile, on stages set close to the surface, the actual speed of these vehicles became all too apparent, as the ground below would zip by at breathtaking pace--and, hopefully, so too would the walls and stray pillars, among other obstacles, as crafts would usually be instantly torn apart at the slightest brush--yet the sense of detachment did not go away.

A lack of traction was understandable while flying starfighters, but there was no sense of a physical environment whatsoever. As long as you weren't crashing into it, the ground might as well have not even been there. All adjustments in level and direction had to be input manually, no matter how minute, with some stages entirely based around maintaining absolute attentiveness and precise piloting to avoid fatal crashes. To be fair, I've heard real-life pilots say that this sense of detachment from the earth is inherent with flying, even without leaving orbit. It makes sense, I suppose, that your relationship with the surface is nonexistent once you're off it.

The GameCube controller was a near-perfect fit for the game, which was one of the few to fully utilize the depth of the analog shoulders. There were, however, two notable difficulties. Holding down the Y button brought up the targeting display, often a necessity for accurate aiming. With the bean-shaped Y button placed directly above the A button, however, it was extremely difficult to keep the Y button held down while tapping the A button to fire. The tiny D-pad, used to issue orders to your wingmen, was distressingly error-prone, often causing the game to misread which of the four directions was pressed. While the wingmen were actually somewhat of an afterthought anyway, in the worst-case scenario, the player might accidentally dismiss them altogether with no way to call them back.

While Rogue Leader is best remembered (or forgotten, as the case may be) for being a technical showcase for the GameCube, its license and production values were supported by solid gameplay mechanics and mission design. It remains the best interactive adaptation of the original trilogy, and I would say that we're long overdue for a new Factor 5 Star Wars title.

For the most part, it was magnificently rebalanced for two players, with stages seeing subtle yet significant increases in the number of enemies. That either player's death meant the mission's failure also helped to keep it challenging, sometimes more so than the original single-player game.

In fact, the final mission, "Strike at the Core," already the most nightmarish obstacle course stage in the game, became twice as hard, as one player was forced to use Lando in the Millenium Falcon, the most unmanageable craft in the game. The saddest part was that, when my brother and I finally beat it after dozens of attempts, instead of a "mission clear" screen and ending credits, we were treated to an unending black screen accompanied by ambient space combat sound effects. So our hard-earned victory went unrecorded, due to a bug that, on further research, proved to be quite widespread among those who'd played the game. Perhaps the developers themselves were never able to beat the stage, so they didn't bother to include an ending.
Posted by Henry at 11:18 PM

"And what if the loss of that video game avatar carried feelings of consequence, in the context of the climax of a game that actually had a story and characters?"

And I wouldn't say I was "quite obsessed," just "avid." Though I did beat Endurance.

Losing men was never an acceptable option in Fire Emblem.

Maybe because the feelings of consequence were too great to be endured in Fire Emblem?

Speaking of enduring, Endurance included 99 waves of enemies, not all of them TIE Fighters. Every tenth wave consisted of Imperial Shuttles that put up no fight and gave you an extra life after you annihilated them. I believe there were also TIE Interceptors tossed in here and there. After the 99th wave, you fight Vader one on one in his TIE Advanced. I vaguely remember him taunting you during this encounter.

And yes, it took about 3 and a half hours. You almost have to go into a Zen state to endure it. I never went back to beat it again in Ace Mode. But then, I never tried beating any of the stages in Ace Mode (all you get is Ace Medals). Now that would be obsessed!

Probably still my favorite game on the GameCube.