My Top 5 Fat Guys of TV and Film

Kevin Smith's size in the news recently reminded me of my high school biology class. I don't remember much from that class, but I do remember my teacher saying that, aside from fat people, homosexuals were the only group that society at large was still allowed to openly discriminate against. My biology teacher was not at all a fat man, so I thought it an admirable show of compassion for a group that, true enough, most people were all too happy to deride. I don't remember what it had to do with biology, but I learned something that day. It's hard out there for a fatso, apparently even for a figure of Smith's stature.

Smith enjoys success as a director and screenwriter, but his public embarrassment got me to thinking about the struggles that fat guys face trying to make it in front of the camera. When Orson Welles literally exploded in the sound booth for Transformers: The Movie, it was not only a once great actor and filmmaker who died that day. That was the final nail in the coffin for the cultured, intelligent fat man in Hollywood. Looking back in search of great fat guy roles from the last twenty-five years, truly it is slim pickings. Like Welles, James Earl Jones possesses an awesome voice recognized all around the world, but when was the last time he was given a meaty live-action role to chew on? Rarer by far than the eloquent black, the respectable fat guy is the veritable white whale of screen acting. These days, the token fat character is often a jolly stereotype, ostensibly easygoing and unashamed, yet clearly meaning, with an impervious-to-criticism heart of gold, to discourage open mockery of innately hilarious physical attributes. Take Hugo from Lost, for example. I loathe him, not because he is morbidly obese, but because he is shallow and uncomplicated. Yet, when I criticize his character, I am automatically denounced as a "size-ist." In my opinion, characters like Hugo do more harm to fat actors than I ever could.

Nevertheless, I have scoured my memories to produce a handful of legitimately inspiring fat film and television characters. So, without further ado, let's get rolling (not literally) with my list of "The Top 5 Respectable Fat Guy Performances of the Last Quarter-Century," though I should warn you that there may be tears. 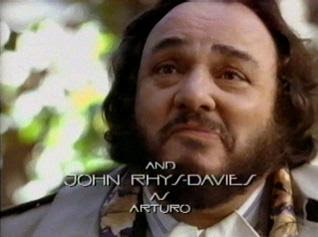 In the realm of the respectable rotund, John Rhys-Davies probably has an edge by virtue of being British. Just as much as Patrick Stewart is usually the go-to actor for refined bald man roles, Rhys-Davies is the guy you want to lend a bit of class to a fat guy role. You'd think I could fill this list with just his performances, but the sad reality is that, just like Patrick Stewart, Rhys-Davies has been relegated mostly to token supporting roles in film. That's disregarding his slumming it in direct-to-Sci-Fi Channel features. His finest work was on television as Professor Maximillian Arturo in Sliders.

As the scholarly elder of the motley crew of dimension-hopping Sliders, the professor was the unsung best character on the show. Rhys-Davies delivered consistently the most layered (multi-dimensional?) performance, depicting the professor as an egotistical intellectual, clearly threatened by his young student's genius, yet also proudly supporting him as mentor and surrogate father. Q-Ball was the brain, Wade the heart, and Rembrandt the soul, but I always found Arturo to be the true guts of the team. Through the more socially challenging alternate universes of the first two seasons (the good ones), it was his sagacity and informed morality that all of his compatriots relied upon to guide them.
Alas, in keeping with the historically shabby treatment of portly actors, Rhys-Davies was fired in the third season and replaced by Kari Wuhrer, his character seen off with one of the least dignified deaths in television history, perhaps topped only by every other character exit on what proved unexpectedly to be the most sadistic show of all time. 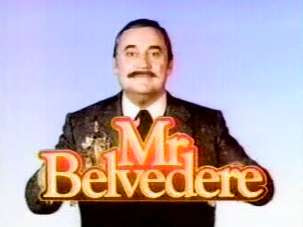 Truthfully, I don't remember very much about Mr. Belvedere. I just remember that, as a kid, I wanted a Mr. Belvedere of my own AND I kind of wanted to be him.

Apparently, the Mr. Belvedere character first appeared in Gwen Davenport's 1947 novel, Belvedere. He was first portrayed on screen by the non-fat Clifton Webb in the film Sitting Pretty. My Mr. Belvedere was the American sitcom incarnation played by Christopher Hewett.

Like Professor Arturo, Hewett's Lynn Belvedere, English Butler to the American middle-class Owens family, was a man of fierce will and ego yet also wisdom and humanity, alternating between butting heads with the youngest of the Owens children and lifting the brat up upon his figurative shoulders as a support through all the trials of growing up. And, while I'm sure, like most family-oriented sitcoms of its vintage, the show was often ridiculous and has aged horribly, my young self found Mr. Belvedere to be simply the classiest character on television. 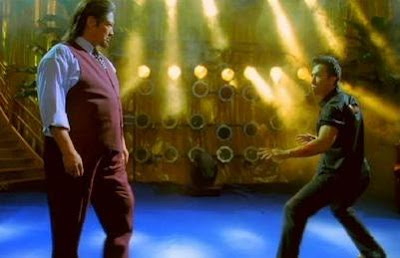 Middle America may remember kung fu film legend Sammo Hung for his role as Sammo Law, fish-out-of-water detective on the Walker, Texas Ranger lead-in program, Martial Law, co-starring Arsenio Hall and Kelly Hu. Yeah, I know, there's not one thing right in that statement, yet it really did happen. On Martial Law, Sammo was saddled with the wretched double of being the gentle fat man AND the no-speak-English babyface Chinaman. A much better showcase for his abilities was the Hong Kong martial arts-crime film SPL: Sha Po Lang (AKA Kill Zone).

As the untouchable Triad boss Wong Po, he was about as far as you could get from Sammo Law. Fat Marlon Brando was a sad, disgusting joke, but kingpin Sammo was truly fearsome. Part of it was the weirdness of seeing Sammo as a bad guy, but this was far more than just a novelty performance. When a determined detective resorted to fabricating evidence to finally bring in the Triad boss, Wong Po did not stop at merely unraveling the flimsy scheme. As he totally annihilated the entire police squad, ordering hits on those who had the gall to cross him, and pummeling a few of them himself, any notions of a slapstick Sammo went out the window. And whereas Rhys-Davies and Hewett were simply the best actors for roles that were not explicitly written as fat, Sammo integrated his corpulence as an asset to his performance. Wong Po's luxurious proportions were a proof of his absolute power.


Yeah, I could only find three, and I was seriously reaching for that last one. Shall we widen the list to include fat females as well? 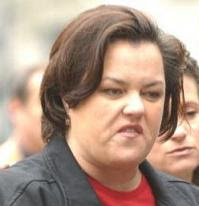 Rosie O'Donnell is a worthless piece of scum and a total waste of space. I hate her with every fiber of my being.
Posted by Henry at 11:30 AM

1) What do you think of John Rhys-Davies's foray into Hobbiton movies? Pretty classy?

2) This may be a stretch for some and offensive to others, but in my mind, I always confuse Mr. Belvedere with Teddy Ruxpin, and it happens that just the other day, I saw a big stack of Teddy Ruxpins for sale at Costco. These were retro-style, not some heinously hip revamp for today's delinquents, nor a naturist nightmare for the Grizzly Man crowd.

3) Yeah, wasn't SPL a pretty outrageous movie when we saw it? But what about Sammo's American counterpart, the Kingpin in the Daredevil movie? Why didn't he make your list?

4) Rosie O'Ditto. Haha, can you imagine the Pokemon Ditto with Rosie's face?

5) Anthony "Nutsmouth" Anderson from Romeo Must Die. Oh wait, you said, "respectable fat guy." Well, maybe his Law and Order turn? Nah, it's Romeo Must Die all the way.

6) What about Perry Mason, the later ones, where's he's old and fat? I never saw them.

7) Jake and the Fatman? Never saw those either.

8) Aha! The Commish Chiklis! He was chubby. The Shield Chiklis? All muscle, baby.

1) For sure, John Rhys-Davies as Tom Bombadil was a huge get for those movies.

3) Obviously there is some degree of subjectivity, but I have never thought of Michael Clarke Duncan as a fat actor.

4) I would much rather imagine the Ditto face on Rosie.

5) Anthony Anderson is definitely one of the best fat actors working today. A true original.

6) I know nothing of Perry Mason, but I did decide to exclude James Doohan because he was not his eventual size when he originally landed his one big role.

8) The Commish was a good fat role, but it's probably telling that Chiklis would not have another role of consequence until he reshaped himself. Now he's primarily a bald actor.