I wasn't expecting to ever bring up Heroes again on this blog. I thought the show was imbecilic to begin with, but it did have some rare virtues, namely its brisk, filler-free pace and its resistance to such suspense conventions as weekly cliffhanger endings and "raise two questions with every (non-)answer" (seriously, who actually likes that). The writing only deteriorated over the next two seasons, and, by "Volume 4" (which was actually the second half of season 3, for those confused about how long the show has been on), I was watching only for the unintended humor offered by the repeated blatant lapses in logic and continuity. After having missed the first several episodes of this season (mainly because I didn't care enough to know when they were on), I hadn't planned on watching any more Heroes. A Hulu marathon on an empty day caught me up, however, and now, having disparaged the show previously, I feel obligated to give this past season some due props. This may have been the most dramatic positive turnaround a series has ever seen. The fittingly titled "Volume 5: Redemption" was, not only the best season ever of Heroes, but actually a pretty good show besides.

The writing was definitely improved, exhibiting a firmer grasp of the show's characters and concepts, as well as some actual attention to continuity. This was immediately evident in the largely rewritten main dude, Peter Petrelli. This was a guy who, in (the admittedly strike-shortened) season 2, left his romantic interest stranded in a post-apocalyptic future and, not only made no concerted effort to save her, but has never mentioned her again since. It's probably too late to rescue that subplot, but at least they remembered that, before he became preoccupied with fighting other superhumans, he was once dedicated to helping people as a nurse. For at least the first few episodes of season 4, using his powers to save people as a paramedic, he became a likable, even admirable character, soulful and empathetic, instead of selfish and obnoxious as before. Meanwhile, his nemesis, Sylar, who over two seasons experienced more preposterous identity crises than most pro wrestlers over their careers, finally underwent a change of heart that I can almost buy. But the show's improvement was due, first and foremost, to the addition of Robert Knepper ("T-Bag" from Prison Break) to the cast as Samuel Sullivan, the season's antagonist. 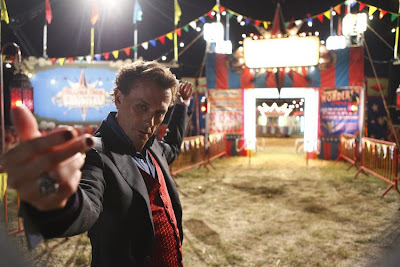 Knepper's tragic performance as Samuel, in many ways a more polished version of his scene-stealing character from Prison Break, was, not only the best character this series had ever had by far, but also the most compelling new character this TV season, and perhaps the best TV villain in a long time. With the power and charisma of a Magneto, this carnival proprietor was exactly the sort of antagonist that this story had been sorely needing. Perpetually aware and justifiably mindful of the bitter division between the gifted and the normals, he offered his fellow specials a home and family, while naming society his enemy. His case would come to exemplify everything frightening about the emergence of a new class of human. At the same time, those specials who answered the call, to defend that world that had persecuted them, would serve as a reminder that it was ultimately their choices as human beings, and not their superpowers, that defined them. Of course, that was even truer of Samuel.

At first glance, he was a masterful schemer, always appearing at just the right time and place and with remarkable perception to offer the heroes guidance and promises. Because you knew he was the antagonist of the story, you assumed he was playing a long game, manipulating them for unknown but assuredly nefarious ends. But his promises were surprisingly not empty, his advice was sound and based in truth, and, even when seemingly exposed and backed into a corner, he would own up to his failings and find his way out with reason instead of lies. Even as he made his moves, seemingly setting his plan into motion, his endgame grew increasingly ambiguous, leaving you wondering if maybe he himself had not made up his mind and was in fact walking the line. Most telling were the glimpses of Samuel in his private moments, revealing, not an evil mastermind, but a spiritually fragile man driven by the same needs, desires, and disappointments that drive us all. As he recruited specials with offers of sanctuary, constantly reminding them that they were different from normal people, perhaps he was really trying to convince them that they were like him, because he was the one that needed them. And perhaps, in the end, he was deceiving himself more than anyone else. The more you learned about Samuel, the more you could not help rooting for him. It was not that you wanted to see evil triumph over the heroes, but you hoped against hope that life might work out for him. His campaign finally arriving at its inevitable end, his arc was a better X-Men story than any of those live-action movies.

Season 4 was hardly perfect--the plot still had its share of holes, and most of the returning characters were still trash--but Knepper's performance made it all worth it, delivering a truly three-dimensional character in the most unlikely of places. His accent, attire, and age sometimes seemed off, but all that was overshadowed by his thoroughly convincing command of the character's psychology, selling in turn his tremendous charisma, ambiguity, and human frailty. He got me feeling more for Samuel Sullivan than I have for most characters on any number of better series, and he made Heroes, week after week, the one show I looked forward to more than any other. Although a season 5 has yet to be confirmed, the end of this volume set up the next. Samuel's story was fairly well resolved, however, and I still don't give a damn about what lies ahead for the heroes. If it does come to pass, I will probably watch, but if it doesn't, Heroes will at least have ended on a high point.
Posted by Henry at 6:47 PM