Famitsu (scans at biohaze.com) has revealed the final two playable characters for Resident Evil 5: Gold Edition's "Mercenaries Reunion" (as well as the significance of the mode's title). Get ready to welcome back Chris and Jill's original sidekicks, Rebecca Chambers and Barry Burton!

I believe "Mercenaries Reunion" is just the old "Mercenaries" mode from RE5, but Capcom is adding eight new playable characters. Previously, they had revealed Excella (Wesker's female partner) and Josh Stone (Sheva's mentor). Four other "characters" were actually two extra costumes each for Chris and Sheva. For the last two slots, I was expecting something lame, like another pair of alternate outfits, though I had my fingers crossed for Leon and Claire. This reveal may actually be even better than that.

Within the series timeline, Rebecca has not even been mentioned since the original Resident Evil. Barry was last seen briefly in RE3, but then he was seemingly written out of continuity in Umbrella Chronicles. Series devotees have been waiting a long time for Capcom to reveal whatever happened to these two. Unfortunately, this being just a silly bonus mode, there won't likely be any answers here.

Of course, the real attraction of Gold Edition is probably the "Lost in Nightmares" scenario, a new chapter expanding upon and making playable the flashback sequence that had Chris and Jill tangling with Wesker in 2006. Maybe at some point during the mission, Chris and Jill will reminisce about old times with Rebecca and Barry, leading to a flashback within a flashback.

That's not very likely, but this is still cool news. Really, it's kind of what I wanted out of RE5's "Mercenaries" in the first place. Back in RE4, the surprise guest appearances of HUNK and Wesker were genuine crowd-pleasers, and they and Krauser had unique signature moves (HUNK's neckbreaker, Wesker's thrust punch, Krauser's infected arm) that provided very different experiences from playing as Leon. In RE5, Jill and Wesker were compulsory inclusions. They were still cool and did have a few unique weapons and skills, but every character had moves for every situation (neckbreakers, stomps, etc.), so nobody felt quite so distinct anymore. I don't know if Rebecca and Barry will possess any amazing techniques, but at least they'll bring the fanservice.

Interestingly, unlike RE5 Chris and Jill, HD Rebecca and Barry are instantly recognizable as the same people from the GameCube games. In fact, without any direct comparison shots, I could almost mistake them for the same models. I don't know whether this is a deliberate artistic decision or just laziness. Regardless, the Rebecca render is especially awesome (although I sadly don't expect there to actually be any dual-wielding going on). 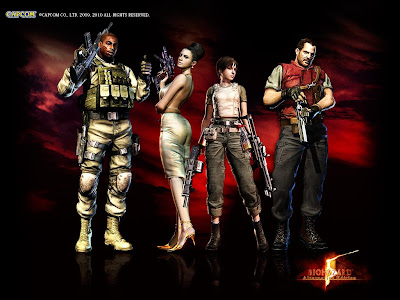