"Our frothing demand for this game increases." Stretching prominently across the front cover of Atari's North American release of Ikaruga, thus read the legendarily awful quote from David F. Smith's IGN preview. But if ever there was a game that merited a "frothing demand," Treasure's 2001 arcade shoot 'em up was it.

Treasure, a small studio founded by former Konami employees who had worked on the Contra series, made a name for itself as a master developer of fast-paced 2-D action games in that same vein, such as Gunstar Heroes and Alien Soldier. Their first attempt at the arcade vertical shooter, Radiant Silvergun, quickly came to be regarded among hardcore shoot 'em up fans as the pinnacle of the genre, but the game never saw release outside Japan. With the shift to polygons, traditional 2-D action games were becoming an increasingly hard sell, so it was a delightful surprise when Atari decided to pick up Ikaruga, the spiritual successor to Radiant Silvergun, for release in North America and Europe in 2003, giving Nintendo GameCube owners the chance to experience, not only the best game Atari ever published, but possibly the greatest work of interactive art ever produced.

Borrowing from another previous Treasure title, the side-scrolling platform shooter Silhouette Mirage, Ikaruga's gameplay centered around the polarity mechanic. The player's ship could switch between black and white modes. While the two offered no unique abilities, the color system added a new dimension to traditional bullet-dodging gameplay, because all enemy crafts and their bullets also came in only black and white. The player was impervious to bullets of the same color and, in fact, could even absorb them to power up a homing laser--the player's only other weapon besides regular bullets--that functioned vitally like the screen-clearing bombs found in most shoot 'em ups. The player's own attacks, meanwhile, were twice as effective against enemies of the opposite color. Players were consequently encouraged to balance the cautious approach of invulnerability against an enemy of the same color, versus the greater risk/reward of increased attack power when fighting with the opposite color. If you had the nerve, the most dangerous approach was actually the "Bullet Eater" strategy, a pacifistic option that involved going through the game without shooting at all, but rather scrolling passively through stages and waiting for bosses to automatically depart after set time limits.

Regardless of your initial strategy, matters rapidly became more complicated as black and white enemies attacked together, and bosses could fire both colors alternately or at the same time. Finally, on higher difficulty levels, defeated enemies would explode into bullets of their color as a last gasp attack, making for some hairy situations, especially in two-player co-op, when enemies of both colors would be attacking and dying all over the screen at a brisk pace. As an arcade shooter, Ikaruga was necessarily difficult, with screen-flooding waves of tiny bullets quite the norm, but it was actually less overwhelming than many other twitch shooters, since players at least had the chance to absorb half of the shots fired at them. 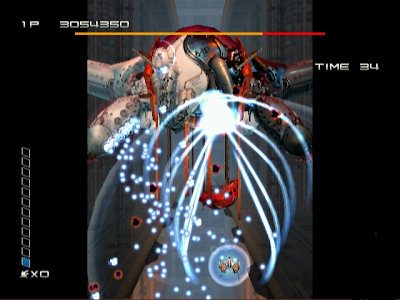 The game was additionally made approachable by the inclusion of a fair continue system that encouraged repeated play almost like level-grinding. Although the game started the player with limited continues, every hour of play unlocked an extra credit for all future playthroughs, until, eventually, "free play" went into effect. It was a simple yet clever way of tempering the token-thirsty coin-op experience for the home market without entirely sacrificing the hardcore appeal. Starting the player with unlimited continues, as in SNK's Metal Slug home ports, would have reduced the game to a half hour experience, during which the player would have spent a thousand lives while skipping past exploration of any of the deep, skillful mechanics. But a game that repeatedly ended with the Game Over screen during stage two would only have frustrated normal players into giving up, rather than inspiring them to improve. The guarantee of progress over time encouraged sticking with it to earn more credits, while the acquisitions of skill and experience became almost tangential outcomes for less serious players. The system was not new in Ikaruga, but it's still not common enough for my tastes (I really wish Contra would go this route).

I was no expert, so I died hundreds of times before I finally beat it for the first time using seven credits. The ending that followed shook me to the very core of my being. Highlight below for spoilers:

Chasing the enemy's crystal core through a skyward tunnel, the player's craft, piloted by a young man named Shinra, unleashed all it had in relentless volleys of lasers before crumpling in a limp explosion dwarfed by the final vision of the enemy blowing up with a brilliant discharge of energies. As the credits rolled, the camera then cut to a view of the planet below the steel firmament that been the stage for the entire game. Unblemished by the war of men and machine gods up above, the forests were still green and beautiful.

It hit me hard--to find out that, no matter how good I got at the game, no matter how hard I worked to minimize my deaths, ultimately, Shinra was going to die willingly in order to win that serene image that I would then have to treasure without him, without my virtual other self. With every previous death, Shinra and I had been in it together and then come back together, but, this time, this essentially nameless, faceless video game character had taken control out of my hands and into his own. I couldn't comprehend it at first, and I was bitterly disappointed that I could not find anybody else who was so struck by it as I was. The ending has stayed with me ever since, and it remains the first image that comes to my mind when considering the emotional potential of video games. Years later, while discussing the topic of "the greatest video game endings" with some pretty hardcore gamers at work, I brought up Ikaruga, and I found that, even among the few who had completed it, none could remember the ending. By that time, it didn't bother me anymore that nobody else cared. But I do. 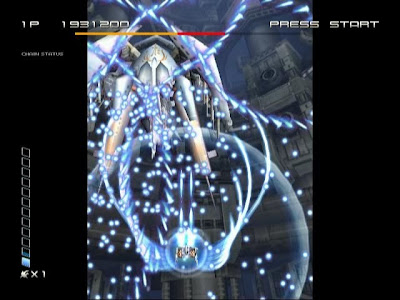 The credits also surprised me with the revelation that the design team consisted of just four Treasure employees--Hiroshi Iuchi (director, backgrounds, music), Atsutomu Nakagawa (main programmer), Yasushi Suzuki (character/object design and illustration), Satoshi Murata (sound effects). That's how Treasure prefers to do things, apparently, and there's no arguing with the results. Outside staff was contracted for additional programming and art chores, but it remained a project of unified vision throughout. 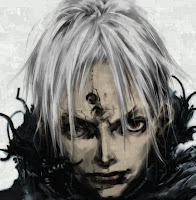 Indeed, Ikaruga was the masterpiece that it was because all of the elements worked together in such perfect harmony. The polarity concept provided not only a novel mechanic but also a visual elegance and stark beauty, since, with only two contrasting colors to deal with, bullets and objects were easily distinguished from the awesome backgrounds and from one another. The relentlessly grandiose soundtrack told the story in lieu of the bits of narrative text that were cut out of the English releases. (The text is restored and translated in the Xbox Live Arcade edition, but I have yet to check it out, because, to be honest, I'm a little afraid it won't live up to my imagination.) Though barely glimpsed within the game itself, Suzuki's portrait of Shinra's ravaged face continues to haunt me. And the sense of authorial intent was nowhere more evident than in the controlled grip with which the self-scrolling game pulled the player through the incomparably intricate level designs and the massive boss battles--all of them unique, and each more awe-inspiring than the last.

At a very crude level, the two unrelated "shooter" genres--shoot 'em ups and first/third-person shooters--might both be categorized as "action," but the experiences could not be more different. A master-class shoot 'em up like Ikaruga takes the player to another place--somewhere beyond the mind and body. As opposed to visceral violence and panic, it provides a hypnotic calm that is not any less vital, less human than the blood and guts of a war first-person shooter. Rather, like a fine painting or poem, it can tap into that ethereal part of our selves that makes us more than animals.

For all my useless talk, the true beauty of Ikaruga defies description. They're only words, after all. Then again, they're all I've got, so here goes: Ikaruga is a perfect game. It is a work of art. It is a language unto itself. It is an absolutely essential experience.
Posted by Henry at 11:14 PM

Interesting. I didn't remember the ending either until you discussed it, and then only vaguely. I suppose I was more struck by the ending of Gradius 5, with its time warping. Let's play it again. Both of them. I'll use Bullet Eater strategy this time.

The first images that come to my mind when it comes to emotional potential in games are usually Ico, but the interactive portions, not the cinemas. Aeris among the flowers in the church in the slums. Marsh Cave in Final Fantasy for the sheer sense of survival horror.

And of course, a game-changing (and soul-changing) ordeal I like to call "Becoming the Eggbear."