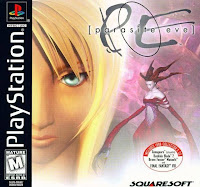 It often feels as if, ever since Square and Enix merged in 2003, the company has been less productive than Square had been by itself. Or perhaps it's just that Square Enix is producing fewer titles of consequence, since everything these days is Final Fantasy remakes and spin-offs, low-profile portable games, or hardcore Tri-Ace stuff.

During its 32-bit prime, Square released three numbered Final Fantasy titles in four years, and still had time to develop other big games--sequels and original titles--alongside. One of the best of these was Parasite Eve, released for the Sony PlayStation in 1998.

Before it was a video game, Parasite Eve was one of the more prominent J-Horror novels that followed Koji Suzuki's Ring. First published in 1995, Hideaki Sena's story of intelligent mitochondria attempting to replace humanity became quite a sensation in Japan, and it quickly spawned a successful film adaptation that actually released before the original 1998 Japanese Ring movie. Neither the book nor the movie had much of a presence in the United States--they didn't even see release in North America until years later--but Square had different plans when it bought the rights to make the game version(s).

Despite the fact that most of the English-speaking world would have been unfamiliar with the source material, Parasite Eve seemed specifically designed to ease Westerners into the genre of Japanese role-playing games. A year prior to its release, Final Fantasy VII had already done the job of hooking Americans, and, while Final Fantasy VIII was not due for another year, Square was not going to let 1998 pass without another blockbuster to follow FFVII.

Powered by the same high production values as its predecessor, Parasite Eve was another showcase for Square's CG supremacy, relying on the pre-rendered backgrounds and cut scenes that the company was becoming known for, and both the pre-rendered and the real-time stuff exhibited improved technology and a more mature direction, with higher detail and more realistically proportioned characters. Still no voice acting sadly, but complementing the cinematic presentation was a tightly focused script that seemed about movie-length.

A sort of semi-sequel to the novel, the game featured a new plot focused around original characters designed by Tetsuya Nomura. Unlike most J-Horror--but very much like a video game--Square's Parasite Eve starred a super-powered heroine named Aya Brea, who would tap into her mitochondrial potential to supplement her skills as an NYPD cop. The game was written and directed by Takashi Tokita, who also wrote and designed Final Fantasy IV, and now heads Square Enix's Production Team 7, still supervising the various recent and ongoing FFIV-related projects.

A departure from Final Fantasy and practically everything else in the Squaresoft catalog, Parasite Eve featured modern-day urban environments, and it even shifted from the Japanese setting of the novel to the streets of New York. In more typical Square fashion, the game was still an RPG, but it introduced a number of refinements for a more streamlined experience than the average Final Fantasy or Dragon Quest. Instead of an overworld, for example, the player transported from one location to another by selecting destinations from a map. There were no towns full of random NPCs dispensing useless pleasantries. "Dungeons" were short and straightforward, requiring minimal exploration. New weapons and ammo could be found simply strewn all about the pre-rendered New York environments. Rather than providing players yet another forty-hour globe-trotting JRPG epic, the story transpired over the course of six in-game days, and the whole thing could be completed in about ten hours. 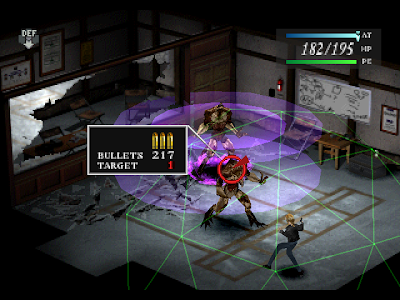 Parasite Eve was most identifiably an RPG in its combat and character growth systems, but those too were integrated more subtly than in most JRPGs. Battles initiated randomly, but the encounter rate was fairly low, and, unlike Final Fantasy, the game did not load into a separate battle screen. Rather, enemies just materialized along with invisible walls, and the player could either fight or flee via the menu.

The battle system was a modification upon Final Fantasy's Active Time Battle engine, still using a time gauge to determine when the player character's turn came up. When Hiroyuki Ito designed the ATB system for FFIV, it introduced a sense of urgency to turn-based combat. Parasite Eve took things further by allowing the player to manually move Aya around the battle stage between turns. Time would stop when it was the player's turn to input actions via the menu, and a polyhedral dome would radiate from the player character to represent the effective range of the equipped weapon. But the same did not apply to the enemies, which consisted almost entirely of barely mutated animals. While waiting for the time bar to fill up, the player could actually attempt to outrun or sidestep enemy attacks in real time. Movement was slow, rendering some damage unavoidable, but many of the boss fights felt closer to traditional action games, with victory depending on pattern recognition and projectile dodging. Although the game's difficulty level was very forgiving, the quasi-real-time battle engine was still more exciting and involved than any traditional turn-based system, while also feeling more relaxed and methodical than a button-masher like Tales or Star Ocean. The inspired balance made for a more substantial evolution of the ATB system than in any of the post-FFIV Final Fantasy installments. 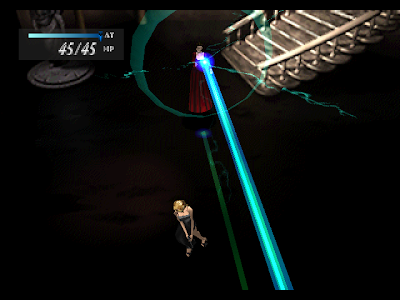 Aya gained experience and levels through battling. Instead of money for shops, she could pick up tools to tune up her guns for greater attack power, or to bestow upon them special effects, such as fire or ice. Again, the game was short and easy, so it wasn't necessary to worry too much about the numbers. In addition to dealing damage with firearms, Aya would also learn to tap into her "Parasite Energy," which was basically magic, though the majority of spells provided only healing or status effects.

Despite having a popular book and movie for its source material, Parasite Eve's plot and characters were undoubtedly its weakest aspects. The novel and all its adaptations posited that mitochondria were actually an intelligent existence named "Eve" that lay dormant in humans, quietly evolving until the time was right to unseat mankind with the ultimate life form. I don't know how the other versions of the story fared, but the pseudo-science plot of the video game was a little too babble-intensive for such a far-fetched premise.

The characters were all fairly one-dimensional, and the short length of the story didn't really give them enough time to become more than clichés. Aya was the independent woman trying unsuccessfully to live a normal life, after having survived a traumatic event from her childhood. Her partner, Detective Dollis, was the fatherly older cop, whose marriage fell apart because it got too hard for his wife to share him with the badge. Naturally, he also had an emotional young son, who, rather than obey reason, would run away from his father and toward danger in a desperate plea for attention.

Where the story worked was in its narrative composition. The six-day progression infused it with a sense of impending dread. This was not a survival horror game; the characters were not trapped in a nightmare looking to get out. The horror was encroaching on their world and their lives, taking over every aspect one day at a time, and the only way out was to unravel the mystery of the mitochondrial menace, so that they could devise measures to fight it. But time was limited, and the situation grew ever more hopeless with each fruitless day. Some grotesque imagery in the cut scenes--animals exploding into monsters, people melting into goo--could be frightening, and the game earned Square its first M rating, but the game was less scary than suspenseful, since you always expected what lay ahead to be worse rather than better, and the tension kept building all the way up to the finale.

As Square's "cinematic" game, Parasite Eve was "big" without being large. It showed that not every RPG needed to be a fantasy-themed timesink. In its own era, it was criticized precisely because it felt so lightweight. Although it seemed built as a mainstream JRPG, I suspect the legions of fans that had just gotten into the genre with FFVII were probably hungry for another sweeping epic. Now the genre is on the verge of collapsing under its own bombast, and Parasite Eve might better be described, not as "lightweight," but "agile." It boggles my mind that no game since has picked up on any of the evolutionary aspects of its design. Even its own sequel did not retain its mechanics, opting instead for more traditional survival horror gameplay. Yet so many of the problems with the JRPG genre today--greuling grind-heavy pace, mind-numbing menu battling, life-wasting world "exploration"--were already fixed over a decade ago in Parasite Eve. I think it's time fans and developers took another look at this game.
Posted by Henry at 4:52 PM

How do I put this diplomatically? Enix ruined Square.

also feeling more relaxed and methodical than a button-masher like Tales...

A correction needs to be made. Replace "Tales" with "Kingdom Hearts".

It takes a lot more thought than just smashing the A button to get those +100 hit combos, you know (if you're not doing it the cheap way).

I didn't mean to suggest that there wasn't skill involved. But my point was that Tales does require you to hit the buttons repeatedly at a very high rate, taking the experience pretty far from "relaxed."

Also, I was mainly speaking from the perspective of when Parasite Eve was released. The contemporary Tales and Star Ocean titles would have been Tales of Destiny and Star Ocean: The Second Story (though, actually, both those games came out later in North America).

If you're still not satisfied, perhaps you or Czardoz could enlighten me as to the "method" at play when you guys burned through the TP like crazy to massacre ordinary weak enemies in ToD.

How do I put this diplomatically? Henry's always dying. I can barely maintain enough TP to heal him constantly.

Fool, you didn't even have any healing spells. And you were the one always begging for gels even though none of the enemies in that game were a threat.

Let's put it this way: There was no need to strategize in a game as easy as the original Tales of Destiny. I'll say that.

However, in Tales of Destiny 2 and Tales of Hearts, the stupid thing to do would be button mashing, because there's a bar that limits how many actions you can perform (magic, artes, attacking) before your guard breaks and enemies get a free hit.

If you're going to put it this way, then quit telling me and Czardoz to stop button-mashing in fighting games. Isn't "trying to do stuff [combos]" methodical?

I'm not going to repeat myself, so I'll just say that you people are amateurs.