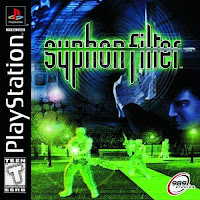 Syphon Filter was one of the few games I ever purchased based on having played the demo. I do believe that demo was my first exposure to non-platforming third-person action in the 3-D era, and the experience was pretty startling.

Developed by Eidetic and published by Sony Computer Entertainment America's 989 Studios division as a first-party title for the Sony PlayStation in 1999, Syphon Filter was probably the premier third-person shooter of its generation. Releasing a few months after Konami's Metal Gear Solid for the same platform, comparisons to Hideo Kojima's seminal stealth action game were unavoidable, but, in practice, the two differed significantly in design and interface. Syphon Filter, more inspired by GoldenEye 007's varied mission-based action gameplay, crossed with Tomb Raider's behind-the-back perspective, may itself have been the more direct precursor to such later titles as Hitman and Splinter Cell, albeit its emphasis was much more on the shooting.

Like GoldenEye 007 for the Nintendo 64, Syphon Filter was predominantly a shooter that also integrated secondary stealth elements within a mission-based structure. More moderately paced than older shooters, it placed players in realistic environments, also giving them mostly real-world firearms to take on such varied objectives as rescuing hostages or locating and disarming bombs. Enemies would often start out unaware of the player character's position, and weapons like the silenced handgun or the sniper rifle allowed you to proceed strategically while avoiding direct firefights. Some stages even required a more cautious approach.

One memorable mission asked the player to shadow someone without alerting him or any of his guards to your presence. While tailing him, you could not avoid having to kill every guard that would pop out suddenly on the trail between you and him, and it would have to be all headshots as well, since you couldn't allow their screams to alert those ahead of them. Looking back, that was some pretty laborious trial-and-error design with a viciously slim margin for error, but, at the time, I just figured that was what it really took to be an elite agent.

In an age before dual-analog controls, aiming in the 3-D environment relied on an auto-target button to lock onto enemy bodies. Injecting an element of realism, players could, as mentioned, take out enemies in one shot by going for the head, and, to pull off these precision shots, you needed to switch to a first-person manual aim mode that traded character movement for accurate aiming. Helpfully, the text "Head Shot" would pop up to let you know when you had the shot lined up. And you would need to learn to manually aim too, because, midway through the operation, flak jackets would become standard issue on enemies. On the bright side, unlike bosses in other games, even most "name" enemies in Syphon Filter could be taken out with a single shot to the head.

The game was overall perhaps not as accomplished or influential as Rare's game, but it may have been the closest thing on the PS1, and the third-person perspective likely gave it an advantage over GoldenEye 007 in one area, namely character.

The Hollywood-level script cast players in the role of government super-agent Gabe Logan, a veritable one-man army assigned to take down an international terrorist organization developing a deadly new biological weapon called "Syphon Filter." Not exactly high art, but it was fairly riveting action thriller material that, in all honestly, would adapt far more easily to the big screen than something like Metal Gear Solid. Gabe himself was not as vulnerably human as a Solid Snake, but he was a practical and effective agent, who was cool yet believable in an action hero kind of way. 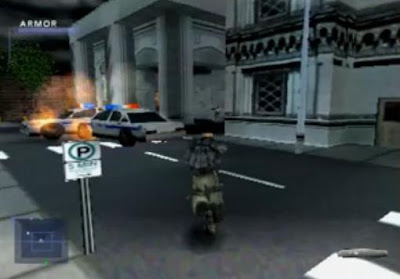 One of the best things about Syphon Filter was Gabe's massive arsenal, which included handguns, submachine guns, assault rifles, shotgun, nightvision sniper rifle, and stealth-kill gas grenades. The most awesome weapon by far, however, was actually the ammo-conserving option. Instead of the standard knife, Gabe packed a taser. To use it, you would hold down the fire button to continuously shock the enemy. After a few jolts, they would be stunned and disabled, but if you chose to continue tasing them, they would eventually start to scream as they burst into flames, only dropping dead when you finally let up. During the early missions, enemies were such horrible shots that you could stand still while auto-targeting and igniting one foe after another. Looking back, I can't believe this was a T-rated game, but I suppose standards were different.

In many ways, it was a game ahead of its time. Although it came out after the debut of Sony's DualShock pad, it was still too early for titles to be requiring the new controller, so Syphon Filter just used the left analog as an alternative to the directional pad. The notion of controlling a shooter using just the left stick, much less the D-pad, would today sound ridiculous. It would have benefited greatly from dual-stick controls, analog walk/run, and a cover system, but what was there still made for the most realistic action game I'd yet played.

But, really, the only reason Syphon Filter makes my list now is because of one unforgettable mission midway through the game.

As the mission begins, Gabe's superior officer, Director Markinson, orders him to infiltrate an enemy stronghold where scientists are experimenting on test subjects with the Syphon Filter virus. Included among Gabe's objectives is the order to execute all of the scientists.

Now, anyone who had been paying attention to the crude pre-rendered cut scenes should have realized by now that Markinson was clearly a bad guy, his orders evil. If his clandestine conversations with mysterious shadow figures hadn't already tipped you off, this mission should have at least prompted some questions.

The player's first encounter with a scientist would make clear that they were not dangerous enemy combatants like all the other guys Gabe had no choice but to take out. A few of the scientists would actually be armed, but most would just attempt to flee, and if you chased them down, they would get on their knees, hands behind their heads, and literally beg for your mercy. This awe-inspiring sensation of godlike power over whether these miserable humans lived or died was something new. Always playing the hero, I had never perceived any sort of moral ambiguity in my slaughter of thousands of enemies across all the video games I'd played up to that point. But, whatever was supposedly at stake, I didn't feel right killing unarmed men offering no resistance, especially since Markinson had already given me reason to question his wholly unsatisfactory explanations. It didn't help that the normally sharp personality of Gabe Logan would take a holiday during these sections, offering neither justification nor objection, as he left the dirty business entirely in my hands. Ultimately, faced with that sort of overwhelming power and responsibility, I chose, naturally, to tase them all to death. Moreover, I figured I might as well make the best of their lack of resistance. I would pull back just before they ignited, listen to them beg a little more, repeat the process a couple more times, and then finally grant them peace by letting their bodies combust in blood-curdling screams once and for all.

Okay, so maybe I didn't feel all that badly about it. But it was a required mission objective, and, no matter how I felt about it, it was not possible to finish the stage without eliminating every last one of them. Perhaps I could have offed them in less spectacular fashion, but, once it was established that my feelings made no difference, my gamer instincts kicked back in, and I resolved to proceed in the most entertaining way while expending the least ammo.

Looking back, a lot of critics might justifiably question the effectiveness of those moments. What was the point, after all, of making the player feel bad about actions that the game forced them to take? Without choice, one might argue, there could be neither blame nor consequence. Then again, is it so unrealistic to agonize over a decision, even knowing full well that, in the end, there is only one path that must be taken? In the case of Syphon Filter, it was not how one acted that mattered, but that the player was made to understand the gravity of those actions. In making me consider those questions for the first time in a video game, it earned its place as an important chapter in my gaming history.
Posted by Henry at 5:02 PM

Did the game have body part distinctions for shooting, other than the head shots? Could you have shot those scientists in the arm or leg, for example, then watched them squirm for a bit and fall over, cry out, "You bastard!" and "How could you?" before you finished them off? I'm just saying there are other entertaining possibilities, beyond leaving a trail of charred corpses.

Scientists aside, that was actually a really difficult stage, full of machine gun-toting monks. And I usually exercise a pretty conservative play style, even in the breeziest of circumstances, so I don't think I ever even considered wasting ammo on non-combatants.