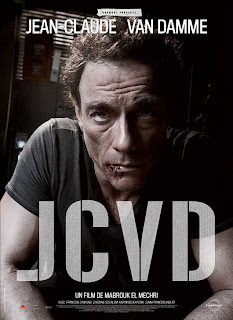 As a longtime fan of the "Muscles from Brussels," I've been wanting to see him back in a legit production. The last action movie of his I saw was Until Death (2007), a direct-to-video feature in which he plays a down-and-out dirty cop, who falls into a coma after getting shot in the face, to wake up, months later, a changed man.

The movie was awful, of course, but, during the first half, when Van Damme was playing surly and self-destructive, it struck me that it was actually a remarkably believable performance against type. It was almost a "Denzel in Training Day" revelation, and I wondered if perhaps the reason it felt so genuine was because he wasn't acting. Regardless, I came away convinced that, given the right role, Van Damme could command the screen even without his kicks. If only someone would offer him that role in a real movie.

With its inspired pitch, I was hoping that JCVD would be the project to get his career back on the right track.

The film begins well with a spectacular single-shot sequence satirizing the over-the-top action that made Van Damme a star. With no context nor any semblance of a script, it reminded me of those Universal Studios live-action stunt shows. At the end of the scene, it's revealed that they are filming a movie within the movie, and it's not going so well for the washed-up, aging Van Damme.

We quickly learn that his problems extend beyond his declining career. His marriage has fallen apart, and he is left fighting a losing battle for custody of his child. Retreating to his hometown in Brussels, he heads to the post office to receive a wire transfer, and it is there that the script settles into its true form as a fairly average hostage thriller.

Director Mabrouk El Mechri fills it with black comedy and experiments with nonlinear narrative, but I was honestly expecting even more of a multi-layered meta-movie, constantly challenging and reorienting our perceptions of the action star with a greater mix of content in the vein of the opening sequence or the hilarious "casting" teaser that got me initially intrigued.

Perhaps I lost control of my expectations. I am glad that it exists, and I encourage everyone to see it. If I'm being honest, however, Van Damme himself is the only remarkable thing in the movie. But surely that's the point, right? Indeed, yet somehow the end product doesn't seem as much about Van Damme as it ought to be.

In the end, the aggressively avant-garde elements come across as less a reflection of Van Damme's soul than of El Mechri's ego. Even knowing nothing about this director, I can feel his manipulative hand, like a mini Godard, deliberately provoking the viewer throughout the implausibly scripted film, and I find his presence just a tad unwelcome, considering that everybody is here for Van Damme.

The centerpiece of the movie is an impassioned six-minute, supposedly ad-lib monologue by the man himself. Barely coherent, a tearful Van Damme reflects on his unfulfilling journey to a movie star life full of drugs and broken dreams, and where nothing was ever as good as it should have been. The real story is not the content of his speech, and I would advise against trying to draw too much from his words. What makes the moment powerful is the raw emotion that reveals Jean-Claude in a new light, as a vulnerable human being, weak as the rest of us.

Riveting though the scene may be, I think it would be a mistake to come away thinking that this is the real Jean-Claude. Truth is not what the often sensational and thoroughly entertaining film delivers, but I fear that many viewers will interpret it as so, and consequently overlook a noteworthy performance. The point should have been to inspire questions about who Van Damme really is, but the overly tidy result may mislead some into thinking they have the answer. Instead of reigniting his career and marking the potential beginnings of a fine actor, it's likely to become just a water-cooler item, brought up by wannabe critics, feeling justified by the film's own self-mocking, to glibly define a mediocrity.
Posted by Henry at 10:48 PM

Were you conscious of the fact that, as you found yourself empathizing more and more with Van Damme the man, you started referring to him near the end of the post as "Jean-Claude"? Almost as if you knew him.

To me, the movie was a thorough disappointment, for the reasons you specified. I found myself perhaps more hostile than you were toward the director's auto-erotic hand. He's like a child at Denny's, smearing the condiments all over the place, but with none of the joy.

Is it foolish to hope that this movie might unlock some doors for Van Damme, maybe a switch to dramatic roles, the way Arnold took to comedy in his later years?

The movie itself makes reference to the fact that "Van Damme" is a stage name, so I thought it appropriate to use "Jean-Claude" when describing the moments when he was playing JCVD the _man_, rather than the celebrity.

I think the movie is worth seeing for Van Damme alone, and it'd be nice if it could open doors to more serious roles, but I think the nature of this role makes it easy to shortchange the performance. I fear it's more likely to lead to him making cameo appearances in movies playing himself.