It's unbelievable to me that someone actually thought it would be a good idea to release the joyous My Neighbor Totoro (1988) as a double bill with the harrowing Grave of the Fireflies. My Neighbor Totoro has since become one of Ghibli's most beloved and profitable movies, but the experiment was originally a failure at the box office. I wonder in what order most theaters screened the two films. I thought perhaps it would be better to have My Neighbor Totoro play second, to let audiences leave on a more uplifted note. But I suppose it's a bad combination either way.

And yet the films are not entirely dissimilar. They both feature two children as the main characters. In both cases, the parents largely absent, it is the older sibling who primarily looks after the much younger, although the job is more than they can be expected to handle on their own.

In the case of My Neighbor Totoro, the kids' mother is in the hospital for some unnamed condition. Based autobiographically on Miyazaki's own mother, who was sickly with tuberculosis, it's just a reality of this family's life, never played up for manipulative tragedy, but the uncertainty of her recovery provides an undercurrent of tension throughout this otherwise most gentle and unaffected of Miyazaki movies. I must admit, however, watching this after Grave of the Fireflies, and thinking back on what horrible thing happens to the mother in that one, I could not help feeling somewhat jaded at the sick mother subplot in Totoro. Nevertheless, while Grave of the Fireflies is surely the more powerfully moving film, Totoro is more personally resonant, and occasionally powerful in its own way.

When I was growing up, my parents worked every day into the night. As long as I didn't have to get up early the next morning for school, I would often stay up waiting until they got home. Sometimes they would be a little late, and, a few times, my mother came home very late. On those nights, even if I had to be sent to bed before she got home, I would just lay there unable to sleep until I heard the sound of the garage door opening to announce her arrival. She always did make it home, and I would never have anything to say about it the morning after, but those were some of the scariest nights of my childhood.

I recognized something of those moments during parts of Totoro. When the girls are waiting for their father at the bus stop, they don't discuss their worry at how he's late; they just continue waiting patiently. As they wait, Totoro—that strange, monstrous, possibly imaginary bunny-bear creature—keeps them company. Similarly, those times I was waiting, I would try to read, watch TV, or play my Game Boy—whatever I could find to try to keep myself distracted and my imagination occupied by anything other than what was really on my mind.

That said, it is odd to me that, of all creatures to help these girls cope through their sad and scary moments, they would turn to Totoro, who himself seems kind of scary to me. Seriously, I'm not sure how this thing, with his Chewbacca voice and Cheshire Cat grin, ever came to be perceived as cute, to the extent that sales of Totoro merchandise alone could probably sustain Studio Ghibli, and he has even become their logo. I can only attribute his popularity in Japan to cultural differences. Even freakier is the magical Catbus, with its caterpillar-like legs and that same Cheshire Cat grin. I think these designs show off the playfully eccentric side to Miyazaki's imagination. 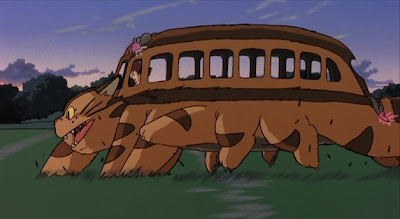 Otherwise, My Neighbor Totoro is not the most diverting watch. Never in a hurry to get anywhere, it's not driven by plot, but by the same sort of senseless and unscripted games that kids play with their imaginations when they don't have TV. There are no bad guys, no wisecracks, and not a lot of moralizing. Even when it is tense, it is quiet. I find it a tad boring, and yet perhaps more utterly genuine and even a little poignant among Miyazaki's films. To me, Totoro himself resembles the content of a nightmare, but, in its strongest moments, what the movie does is capture those feelings of child anxiety that give rise to my nightmares.
Posted by Henry at 2:10 PM