Grave of the Fireflies

Grave of the Fireflies originally opened in Japanese theaters in 1988 as part of a double bill with My Neighbor Totoro. I considered watching the two films together myself but ultimately had to drop the idea, owing to the reality that I have neither the stamina nor the attention span to sit through 3 straight hours of moving pictures. So Totoro will have to wait until next time.

Back to Grave of the Fireflies, this was the first film that Isao Takahata directed for Studio Ghibli. Although no less esteemed than any of Miyazaki's pictures, it is quite a different work. Takahata's most prolific days apparently came before his time with Ghibli, as he has, to date, directed only four Ghibli movies, compared with Miyazaki's eight. What's interesting is that, whereas Miyazaki has always kept the kids foremost in mind when making his movies, Takahata's works have seemed to aim for older audiences. Only Yesterday (1991), about a 27-year-old office worker reminiscing on her 1960s childhood as she comes to a crossroads in her life, was geared toward adult women, while I imagine that My Neighbors the Yamadas (1999), a series of comic strip-style vignettes about an unremarkable middle-class Japanese family, could only be of amusement to mature middle-class parents. Even the more broadly appealing Pom Poko (1994) evinces a sort of “old folk” nostalgia for bygone times. As for Grave of the Fireflies, although it was originally marketed toward families (obviously, since it played together with My Neighbor Totoro), I think it fair to say that that was a miscalculation, as it is too intense for younger children, and far too stark—the opposite of a feel-good movie—for “family movie night.”

Also in common with Takahata's other Ghibli movies, Grave of the Fireflies is set in the real world in Japan, in this case during the end of World War II—perhaps not the proud nation's finest moment (nor anybody else's, I suppose). It opens on a grim note, presenting us with the dead body of the protagonist, Seita, in a train station, where passersby complain of the starving vagrant boy's disgraceful appearance. The rest of the movie then flashes back to tell us the story of Seita and his four-year-old sister, Setsuko. From the beginning, however, we already know that there will not be a happy ending, and, with Seita evidently having proven unable even to provide for himself, we can imagine that his efforts to take care of his young sister will not make for the most cheerful viewing experience. And, boy, it sure isn't.

The movie was based on a semi-autobiographical novel of the same name by Akiyuki Nosaka, who blamed himself for his sister's death due to malnutrition during WWII. Some viewers have interpreted Grave of the Fireflies as being an antiwar story, and certainly the ravages of war are horrifyingly depicted; despite being animated, the movie presents chillingly graphic images of victims of bombings, and thereafter the planes that cross the sky evoke feelings of foreboding far removed from the romanticism of Miyazaki's aviation sequences. But, as much as this movie shows us the misfortunes of innocent civilians caught in the middle of wars between nations, it is also a story of personal failure.

It would be difficult for any viewer to watch these kids deteriorate toward their miserable outcome, but the pain is magnified considerably when you find yourself able to identify with Seita. If you have kids or younger siblings, or if you've ever otherwise been thrust into a position of responsibility for others' well-being, then perhaps you know how crushing it can be when you feel like you've let them down, even if only just in a small way.

Given charge of his sister when he is only a kid himself, Seita is dealt a poor hand. Even so, his and Setsuko's story need not have ended the way it did. Having lost their parents, Seita and Setsuko at first stay with an aunt. But, fed up with the aunt's resentful attitude toward them, Seita decides to fend for his sister and himself while living in an abandoned bomb shelter. Quickly, they run out of food, and Seita hasn't the means to provide for them. A farmer, barely able to produce enough even for himself, advises Seita to swallow his pride and return to his aunt. But Seita can't. He doesn't even acknowledge the suggestion.

For me, it is this moment in the film that sticks out most painfully, which I think is saying a lot. But so often is it that, when we finally fail, we cannot help but obsessively revisit all our mistakes leading up to that failure, too late owning up to those pivotal moments when we went one way but could have, should have gone another. And, as much as I want to criticize and point out Seita's mistakes, ultimately the movie makes me reflect on my own—the many times I've fallen short. Deep down, I know from experience and self-knowledge that, put in his position, I might likewise place personal pride and selfishness ahead of sense and responsibility, and that's what hurts most. Seita and Setsuko's story is almost unimaginable for those of us fortunate enough to be living free from war and destitution. But guilt is universal, and, in this case, I think it is Seita's (and Nosaka's) guilt that resonates to make Grave of the Fireflies an especially penetrating film.

One other thing that notably distinguishes Grave of the Fireflies (and also Takahata's Only Yesterday) from Miyazaki's films is that the material does not seem obviously suited for animation. The movie depicts a real place and time, with no fantastic elements. Takahata, whose shot composition, dating back as far as Hols: Prince of the Sun (1968), always seemed inspired more by great live-action pictures than by other cartoons, perhaps chose to do Grave of the Fireflies as animation because he never saw animation as necessarily segregated from live action in terms of the subjects that it was fit to tackle. That said, this story could have been done in live action (and, indeed, there has been a live-action adaptation of the novel). But would it have been better in live action? Would it have been worse?

The one thing that the animated Grave of the Fireflies does that perhaps no live-action version could ever do as well is its portrayal of the four-year-old Setsuko. Although, in the Japanese version, Setsuko was voiced by an actual five-year-old, it's hard to imagine any child actress being able to fully act out her heartbreaking arc as convincingly as this hand-drawn character, especially as she progressively physically and emotionally diminishes over the course of the film. It is a testament both to the animators' craft and the medium's potential that so many viewers have been so profoundly moved over the images of this girl who is, after all, “only a cartoon.” 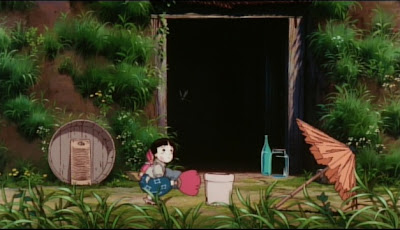 Oh, and if you're wondering why the DVD doesn't look all nice on your shelf next to your other Region 1 Ghibli movies, that's because this is the only Ghibli movie that Disney has never had the US distribution rights to. When Disney arranged to distribute the Studio Ghibli back catalog, it was actually dealing with Tokuma Shoten, which had published all of Ghibli's movies in Japan, with the exception of Grave of the Fireflies, which was produced by Shinchosha, the publisher of the original Akiyuki Nosaka novel.
Posted by Henry at 8:34 PM

What about Shirley Temple?

*Sigh* Well, the character also loses a lot of weight as her health diminishes over the course of the film. I don't know how a live-action movie could pull that off with an actual child.