As a young fan of movie action heroes, I always dreamed of a mega-film starring Arnold Schwarzenegger AND Sylvester Stallone, with Jean-Claude Van Damme, Dolph Lundgren, and maybe Steven Seagal rounding out the cast. Hell, I'd still like to see that.

Recently brought to my attention, The Expendables might be the closest thing for now. The resurgent Stallone's next film, slated for 2010, stars himself, Jason Statham, Jet Li, Mickey Rourke, and MMA star Randy Couture. And what is the premise? "A team of mercenaries heads to South America on a mission to overthrow a dictator." Already has the makings of the greatest action film ever.

But what excites me most is the fact that Dolph Lundgren is going to be in the movie. The man was an absolute physical specimen, as well as highly intelligent and charismatic (at least in interviews), but his big screen career was sadly short-lived, with Masters of the Universe and The Punisher being his only lead roles of note. Better remembered for playing the antagonist to Stallone in Rocky IV and to Van Damme in Universal Soldier, he's made a living, in recent years, directing and starring in direct-to-video features. 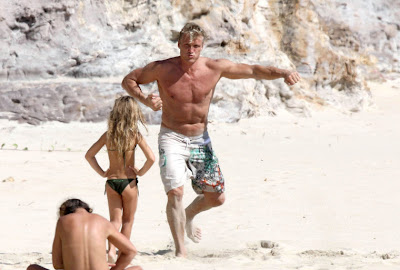 Stallone reignited his own career by channeling the good ol' days (for both his fans and himself) with Rocky Balboa and Rambo, and it looks like he's going to keep riding that wave by personally making the ultimate flick that multiple salaries and egos of his size rendered unfeasible back in his prime. Statham and Jet Li are probably today's biggest action heroes, and getting them both on board is a good step, but their combined power in War wasn't quite enough to get me to the theater. Put them in a film that also reunites Sly and Dolph, however, and we're now pretty close to that dream project of my childhood.

(Supposedly, Dolph got the part after Van Damme turned Stallone down. Too bad that Van Damme won't also be in it, but maybe next time.)
Posted by Henry at 10:08 PM