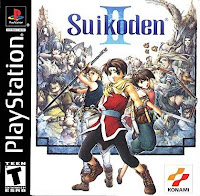 While I enjoyed the original Suikoden, I did not have enough experience at the time with Japanese RPGs to know what elements of it were distinctively "Suikoden." As a result, I had no particular expectations for the sequel, and, by the time of its 1999 release (1998 in Japan), with Square having since changed the industry with its seminal Final Fantasy VII, there were any number of fantasy-themed JRPGs that simply looked and sounded better. My foolishness back then nearly kept me from experiencing possibly the greatest JRPG of all time, but, thankfully, my brother picked it up as a Christmas present for me, and it has been the prize of my PS1 collection ever since.

Suikoden II, while retaining the 2-D style of the first game, sported many graphical improvements over the original, including a deeper color palette, a greater range of animations, and even a few short pre-rendered cut scenes. But, whereas the original predated Final Fantasy VII by about a year, Konami's ill-timed North American release of Suikoden II came out a few weeks after Final Fantasy VIII. Though reasonably attractive for a 2-D game, it was not exactly technically impressive for its time, and, to a casual observer, it would have been largely indistinguishable from the first game. 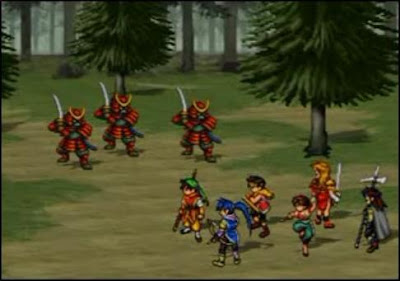 The turn-based combat was practically the same as in the first game. The one major improvement was that, whereas the original allowed only one magic-bestowing rune per character, Suikoden II included characters with as many as three rune slots, giving the player much greater flexibility in customizing the party. This made fighting considerably more fun and also helped to better distinguish the many playable characters from one another, but it was still a very old-fashioned design, and, unless you really liked numbers, the combat and character-building would not have been the main attraction of the game.

The game still included the additional duel and war battle modes. The duels played out identically to the first game, but the war battles were completely revamped, replacing the shallow rock-paper-scissors design of the first game with a more tactical Fire Emblem-style grid-based system. 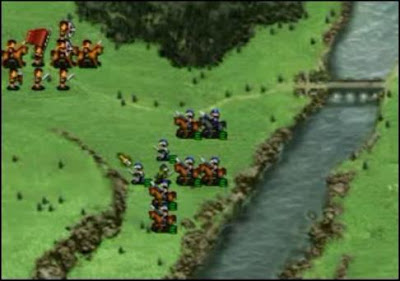 Of course, the real fun still lay in the character recruitment and castle-building. Suikoden II was about three times the length of its predecessor, but that time could be increased significantly by enjoying the many mini-games offered in the better-than-ever castle. The most memorable of these was the Iron Chef-style cooking game that had the castle's cook competing against another chef while a panel of critics drawn from the player's army served to judge.

Suikoden II was actually a direct story sequel, something of a rarity in the genre back then. Taking place about a decade after and situated somewhere north of the first game's setting, it brought back a number of key characters for a story that, while it stood perfectly well on its own, was extra rewarding for veterans. The greatest reward was the option for players of the first game to import their save data over to unlock an additional side quest, one which allowed the player to enlist the aid of McDohl, the original protagonist.

Again loosely based on Water Margin, the sequel reused the premise of the 108 Stars of Destiny banding together to take on the threat of an invading military nation. In broad strokes, the story was much the same as in the original Suikoden, but the beauty of the series never lay in its high concepts, but in the authenticity of its narrative and the complexities of its characters.

Suikoden II was the story of an unnamed silent protagonist and his best friend, Jowy Atreides. As teenage members of the Highland Army's Unicorn Brigade, the two would narrowly survive an insidious Highland plot to justify its aggressive military actions by faking an enemy attack on its own border guard. Forced to flee their home along with the protagonist's sister, Nanami, the friends, awakened to the corruption of their homeland, resolved to bring down the current regime.

Their plans hit an unexpected divide, however, when destiny handed the two boys opposing halves of the Rune of Beginning, one of the twenty-seven True Runes responsible for all that existed in the world of Suikoden. Shortly thereafter, Jowy would inexplicably betray the resistance and his friends by murdering Anabelle, one of the leaders of the shaky alliance opposed to Highland. And so, as the war escalated in the aftermath of Anabelle's death, and the protagonist found himself cast as the leader of the resistance, the enemy found its own rising young hero in the form of his best friend, who alone knew why he chose the path he did. 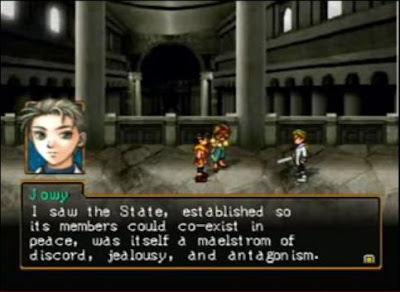 Jowy was as compelling an adversary as you would find in any JRPG, but, in Suikoden II, his story was nearly overshadowed by the presence of the greatest video game villain of all time. The major antagonist of the game, Luca Blight, the "Mad Prince" of Highland, was a man who, not only remorselessly ordered the exterminations of whole villages, but personally partook in the slaughter, reveling in the bloodshed as he cut down those he deemed to be swine with his own sword.

The frightening thing about Luca Blight was that he had no defined goal, no endgame in mind as he engaged in the murders of thousands. There was never anything his victims could offer him that he wanted. He had nothing to gain, no point to make except that he was stronger than those he slew. He sought neither domination nor destruction of the world. Whereas most other villains are finite in that regard, Luca was a monster of seemingly infinite scope. He would terrorize the world for as long as he existed, and that was more than fine with him.

In a take-it-or-leave-it backstory that was only vaguely hinted at in the game itself, Luca, as a child, was forced to witness helplessly as his mother was raped repeatedly by bandits while his father fled for his own life. It was not a crime that could ever be adequately avenged. Although he would kill the bandits and eventually execute his own father for the old man's history of cowardice, these were never acts intended to satisfy. The traumatizing scene from his childhood ultimately left him with, not a quest for vengeance, but an incomparable will to eradicate his own weakness by becoming power itself, and, no matter how strong he became, it would never be enough. 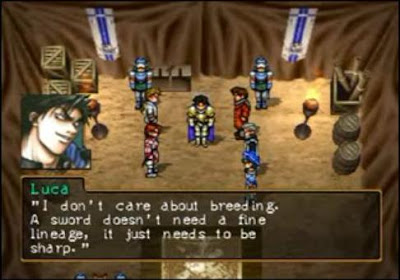 More than anything, however, it was Luca Blight's death scene, the greatest in video game history, that truly cemented him as a legendary figure in the JRPG canon.

Tipped off to Luca's nighttime movements by an apparent traitor from within Highland, the resistance set a trap that basically involved deploying all troops to ambush and kill him. After the player's army surrounded his convoy in the forest and cut him off from the rest of his forces, archers unleashed a volley of arrows to soften him up. A six-man party led by Flik, one of the player's returning lieutenants from the first game, then moved in for the kill. But Flik's team would not be enough, and Viktor, the other returning lieutenant, would have to lead a second party to attack. Still Luca Blight would not fall, and so the hero himself led one final six-on-one battle to hopefully finish him off.

I'd often felt that the traditional party-based combat of most JRPGs undermined the character conflicts that many games tried to convey. After all, how could the tension between Cloud and Sephiroth possibly be resolved through a three-on-one fight? Regardless of the outcome, wasn't Cloud basically conceding that he was weaker than his nemesis, since he required two extra guys at his side? That was one of the reasons, I'm sure, that Suikoden included the one-on-one duels. But, in the face of Luca Blight's immeasurable might, such tactics did not seem excessive. Sure enough, even after three successive battles against the player's eighteen best warriors, he managed to rise to his feet and escape deeper into the woods.

What followed was an oddly affecting image as the lone dying man, drawn to a blinking light, staggered toward a solitary tree. The light turned out to be a wooden amulet hanging from the tree, and, sounding almost reflective as he grasped it in his hand, the fading Luca cursed the uselessness of the object and the stupidity of the world. Fireflies emerged as he opened up the amulet, and, alerted by the lights to his position, archers fired another volley of arrows into his body. The resistance forces rushed to surround him, and, though the outcome was by now undeniable, he still had enough vigor to challenge the hero to one last duel.

The duel was a mere formality. Luca, beginning the fight with an already nearly empty life bar, was now horribly outmatched. Yet, rather than feeling the thrill of victory, I almost felt a sense of loss as I witnessed the fall of this giant who, without the aid of a True Rune, had managed to become the most terrifying man in the world through sheer will and spite. He had exhibited such vitality through this whole protracted affair that it really made me appreciate the gravity of life and the taking of it. And, though it was never clear if even he himself knew why he was fighting, his conviction did not waver one bit as he gasped his final breaths. Showing not a hint of remorse, he instead sounded boastful as he uttered his final words: "It took hundreds to kill me, but I killed humans by the thousands! Look at me! I am sublime! I am the true face of evil!" 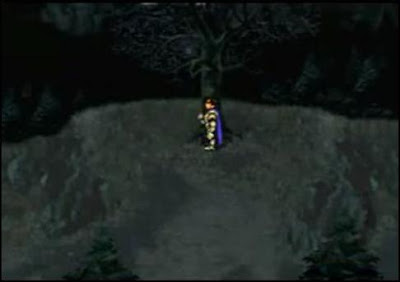 The North American release was unfortunately riddled with issues. While perfectly comprehensible, the translation lacked polish and was afflicted with frequent typos, inconsistent spellings of major character names, and blown references to the first game. In addition, when importing the name of the player character from the first Suikoden, the game only carried over the capital letters and placed them on top of the letters in "McDohl." So, if, say, the player had named him "Tir" in the first game, his name in Suikoden II would have been "TcDohl."

Worst of all, however, the North American release was missing most of the vocal tracks, including the ending anthem. Or, rather, the tracks were in there but, due to some idiotic technical issue, did not play when they were supposed to. The absence was not immediately obvious, and, in fact, if you didn't already know better, you probably would have just found the game to be full of peculiar silences. At one point, one of my potential recruits nervously asked that I listen to her sing. After I agreed to listen, what followed was a few minutes of silence as the girl's mouth animated voicelessly. Many of the recruitment quests posed bizarre conditions, so I actually convinced myself that this was some sort of strange test of my patience and tact.

The original Suikoden was a fantastic game, but its sequel managed to better it in every respect, rightly becoming one of the most beloved titles among JRPG enthusiasts. It even made me better appreciate the first game by encouraging me to go back and take a deeper look at things. To date, no other video game has ever moved me so profoundly as Suikoden II did with its gripping tale culminating in an exquisitely cathartic ending. It remains my personal favorite RPG, securely one of my top five video games in any genre.
Posted by Henry at 8:28 PM