Developed and co-produced by Arika, the EX games were the first attempt to translate Capcom's beloved 2-D fighter into 3-D. Rather than being the official successor to Street Fighter II for the polygon era, the series was more of an experimental spin-off, with installments released concurrently with Capcom's own Street Fighter Alpha and Street Fighter III titles, which continued the series in the traditional 2-D style.

Because the EX titles were not developed in-house, many considered them apocryphal, but the developer Arika was actually a studio founded by Akira Nishitani, one of the original creators of Street Fighter II. In some ways, therefore, it could have been considered the actual evolution of the series, or, at least, a divergent path no less legitimate than the one that continued on from Super Street Fighter II: The New Challengers.

Supporting its position as an alternate sequel, the EX series roster featured almost no post-World Warrior fighters, instead supplementing its selection of classic characters with brand new Arika-owned creations. The only exceptions were Akuma, who appeared in the first EX before supposedly being killed off by a bigger badass, and Sakura, the perennial fanservice favorite who was added in initially as a bonus for the Plus Alpha PS1 port of the first game. 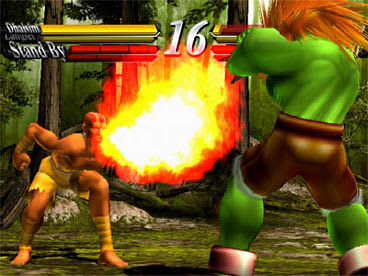 The original Arika characters were a mixed bag. Among the better ones were Kairi, the troubled young man who allegedly killed Akuma, and his sister Hokuto, dressed like a Shinto priestess. Some more eccentric designs like Skullomania and Shadowgeist definitely gave the Street Fighter III cast a run for its money in terms of weirdness. Still others, such as Area, a little girl with a bionic arm and rocket-powered skates, and Vulcano Rosso, a glam King of Fighters reject, were plain bad. In terms of play style, however, it was a pretty good mix of characters that felt consistent with the Street Fighter II cast, generally favoring bigger, broader attacks, in contrast with the more technical Alpha fighters.

The first Street Fighter EX was a pure and impeccably solid fighting game that kept true to the Street Fighter II basics. There were no "custom combos," "parries," or "ISMs." Unlike Capcom's Rival Schools or SNK Playmore's The King of Fighters: Maximum Impact, other titles which attempted to translate 2-D fighting mechanics to 3-D technology, the EX series continued to operate strictly on a 2-D plane, offering no sidestepping of any sort. The only notable change from the original formula was the implementation of a much looser combo system, granting each character tons of link combos and introducing "Super Canceling," which allowed characters to cancel special moves into Super Combos, or even to cancel a Super Combo into a different Super Combo, provided the player had enough stocks stored in the three-level Super Combo gauge. Since, unlike the Alpha series, Super Combos in the EX games did not have multiple levels of power, Super Canceling multiple Super Combos into one another was the main method for dealing huge damage.

Street Fighter EX3 retained the core design of that first game, but with a major new emphasis on team-based combat. The game included King of Fighters-style elimination bouts and a "Dramatic Battle" mode based on the fan favorite two-on-one mode from the Alpha series, but now with support for as many as four simultaneous fighters. The real focus, however, was the "Tag Battle" mode, which was exactly what it sounded like. 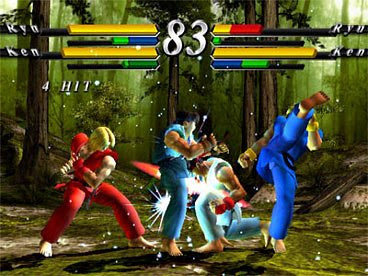 The two-on-two mode allowed characters to tag in and out until one team was completely eliminated. The concept was not new to fighting games, as SNK's Kizuna Encounter and Capcom's Marvel vs. Capcom series had previously brought tag-team gameplay to 2-D fighting, while Namco's Tekken Tag Tournament and Tecmo's Dead or Alive 2, both released shortly before EX3, looked to be establishing it as a trend. But EX3 was the first, and, to this day, the only Street Fighter title to feature a tag-team mode of any sort, and that was a big deal for me, as a much bigger fan of Street Fighter than of Tekken or Dead or Alive.

The best part of EX3 was that, like Tekken Tag Tournament and Dead or Alive 2, provided you possessed a PS2 multitap, the game could be played by up to four players. The Dramatic Battle mode, of course, would become a frenzied free-for-all, but that mode, regardless of the number of players, was never more than a novelty. The real attraction, once again, was the tag-team fighting, which was fun for parties, yes, but also retained all the competitive depth so fundamental to the genre. It was still essentially Street Fighter, a 2-D one-on-one game, but you were now in it together with a partner. The difference was a bit like comparing the doubles game in tennis to singles play.

Teammates might try to cover each other's weaknesses with complementary styles and characters. Knowing that your partner was counting on you placed new pressure on you to perform well, while having to rely on your partner required trust, an even more foreign sensation in the genre. Comebacks also became more exciting than ever, as you would have to reverse momentum after a timely tag to relieve a struggling partner, or you might even have to win the whole thing alone, after your partner got knocked out prematurely.

Over the years, the fighting game genre has been repeatedly criticized for a lack of innovation. I have never found this accusation fair, as my feeling has been that the basic design was perfected around the time of Street Fighter II': Hyper Fighting, and any subsequent titles could be the same or different, but not better. But support for more than two players represented, for me, the biggest addition ever to that design, and it continues to boggle my mind that the feature has not since become more popular and widespread.

The EX games were fairly successful, but they were never fully accepted within the fan community, and while the reasons may not have been fair, I could understand why many players might have dismissed the series without actually trying it.

First and foremost, the games were all extremely ugly for their times. The crude polygonal models of the EX series never did justice to the iconic hand-drawn character designs that contributed so much to Street Fighter's lasting appeal. More than any other genre, I would argue that 2-D fighting games have always relied upon the visual personality of their characters, and the primitive 3-D of the EX games just never cut it. 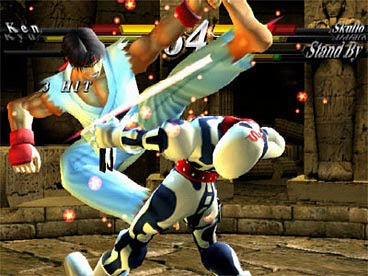 As a PS2 launch title, EX3 may have been expected to show off the power of the new generation, but it was not a flattering representation of the system's abilities, and the game did not look at all impressive next to Namco's SoulCalibur on the Dreamcast or Tekken Tag Tournament, which was also a PS2 launch title.

The feel of the game was also somewhat different from the 2-D games. Although the EX games still played in two dimensions, the move to 3-D had a subtle yet noticeable effect on the physics, most pronounced in the jumping mechanics. After inputting the command to jump, there would be a slight "lift-off" lag before characters took to the air. Once in the air, characters felt a tad floaty, and air-to-ground combat was less reliable. These were more just differences than actual flaws, but a typical complaint by veteran Street Fighter players, before they walked away, was that the game simply felt "off."

A bigger problem with EX3 specifically was a severe dearth of worthwhile single-player gameplay. While all fighting games are meant to be enjoyed in multiplayer, EX3 didn't even have a regular single-player arcade mode. Instead, "Original Mode" was a lame six-stage quest that forced the player to engage in annoying Dramatic Battle bouts in addition to the tag battles. The "Expert Mode" from previous home versions of the EX games, formerly the best challenge mode in fighting games, was turned into the "Character Edit" mode, a shorter, less structured series of trials based around Ace, a new character whose move set could be customized and expanded by using earned points to unlock more techniques.

Yes, Street Fighter EX was a good series, and EX3 a good installment in that series. If you had the equipment and the friends, the four-player tag battles provided a unique and immensely enjoyable take on the Street Fighter experience that, for my money, made it every bit as worthwhile as Super Turbo, Alpha 3, 3rd Strike, etc.
Posted by Henry at 3:33 PM