Released in 1996 (1995 in Japan), Konami's Suikoden was one of the few early pre-Final Fantasy VII role-playing games released on the PlayStation. Seeing it on a GameStop shelf a few years later for $14.99 new, I decided to pick it up on a whim, having little idea what to expect. It was one of the first RPGs I ever played, and, more so than any other game, this was my gateway into the world of Japanese RPGs. Little did I suspect, back then, that the further I delved into the genre, the more this title would stand out as one of its finest examples.

Very loosely based on the classical Chinese novel, Water Margin, Suikoden was the tale of the 108 Stars of Destiny, a diverse group of warriors gathered together to revolt against a corrupt empire. This premise translated, in gameplay terms, to the player's construction of the liberation army through the recruitment of no fewer than 108 unique characters.

The key players would join up automatically through normal game progression, but the majority of the 108 Stars of Destiny were misfits and vagabonds that had to be actively recruited via side quests of varying design. Some just had to be asked, others needed to be persuaded with proof of your strength or righteousness, and still others could only be won over through more esoteric means. Most infamously, the gunslinger Clive could only be recruited by entering a specific inn over and over again, for as many times as it took until he randomly appeared standing in the corner. Since collecting every character was necessary in order to earn the game's true ending, these events, no matter how obscure or inane, could not rightly be considered optional, and completion of them was non-negotiable for any serious playthrough. Besides, even including all character recruitments, Suikoden clocked in at well under twenty hours, making it an exceptionally short game by JRPG standards. 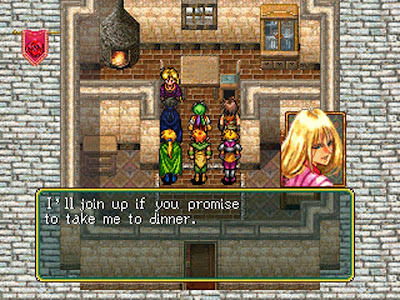 Much of the game's enjoyment came in watching the development of your army's headquarters. Initially a dusty and oversized castle, it would gradually fill up as you recruited more and more characters to your cause. As the population grew, the palette would become more colorful, the theme music more energetic, and the building would even receive multiple expansions in order to house everybody. It became the player's own personal town, complete with shops and blacksmiths, and where the townspeople were your people, who recognized you as their leader, even leaving notes for you in the suggestion box outside your room. Since most characters had neither much to contribute to the story nor any useful skills to justify taking them into battle, the opportunity to interact with them in the castle was typically the most gratifying part of the recruitment process. 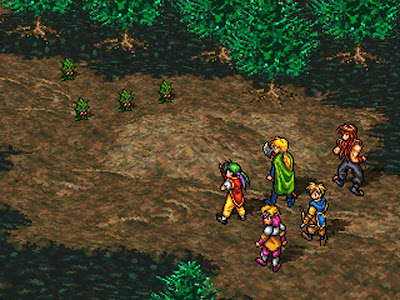 Complementing the signature recruitment and development aspects, Suikoden's combat was basic, utilizing a turn-based battle engine comparable to any number of 16-bit JRPGs. It did feature a uniquely large six-man party formation, a practical necessity due to the staggering number of playable characters. Despite the size of the cast, however, most characters did not have any distinguishing special abilities. Some possessed or could be equipped with runes that allowed the use of magic or skills, and a select few could team up with other characters to perform powerful "Unite" maneuvers. An auto-battle option did nothing more than save the player the trouble of selecting "Attack" over and over again, but it was a surprisingly viable option for most of the game's frequent random encounters.

In addition to the normal battles, Suikoden featured two additional combat modes: large-scale war battles and one-on-one duels. Both of these were fairly shallow affairs derived from rock-paper-scissors, but they nicely depicted key encounters in ways often better than the rather arbitrary party-versus-party combat of virtually every JRPG. The war battles, dividing all of the player's characters into three-man units to take on opposing armies, were practically the only times when even the lesser characters could contribute to the fight. The fast pace and stimulating music kept things exciting as the unit commanders shouted inspiring battle cries. The duels were compelling in their own right, since, rather than guessing, the player was encouraged to read the opponents, who would telegraph their attacks through dialogue. The more enraged a character's speech, the more aggressive his next action would be. 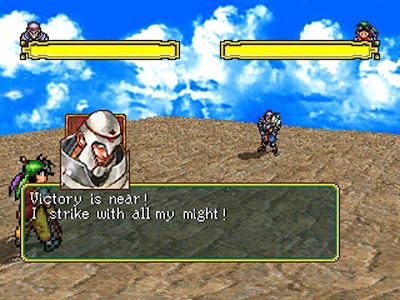 But the true beauty of the game was its story. Straightforward and simply told, it never resorted to narrative tricks, but managed to transcend the medium to deliver an affecting tale by any standard. While I found it plainly enjoyable when I first played it, I did not fully appreciate the drama's rare quality until years later, after it had encouraged me to seek out and play dozens of other JRPGs. It was not a pretentious self-described epic full of world-destroying supervillains and angsty teenage heroes. While it did contain monsters, magic, and elves, it was, at its core, a war story, driven by fundamentally human characters and finely told with a harsh yet genuine sobriety perhaps equaled in the genre only by some of the earlier Yasumi Matsuno works.

Suikoden's silent protagonist was the sixteen-year-old son of Teo McDohl, one of the Six Great Generals of the Scarlet Moon Empire. Young McDohl's best friend, a boy named Ted was, in actuality, the 300-year-old bearer of the Soul Eater, one of the twenty-seven True Runes that governed different aspects of the world. The power of the Soul Eater was the power of death itself, and, when circumstances forced Ted to reveal that power in order to save his friends, they became targets of the power-hungry court magician, Windy. Ted would then transfer the Soul Eater to McDohl before offering himself as bait to their pursuers, giving the others a chance to escape.

The party would find unlikely refuge with a small band of rebels led by Odessa Silverberg, an aristocrat thrust into a position of leadership when she found herself unable to continue living comfortably while the common people suffered under a broken system. A surprise attack would leave Odessa mortally wounded while protecting a single child, and McDohl would be selected to succeed her as the leader of a team still too small to justify being called an army. And thus, with destiny set into motion by a fateful collision of circumstances that would forever change his life and his world, the boy would bear the twin responsibilities of pursuing Odessa's dream of a free world while also guarding the Soul Eater from the sinister Windy. 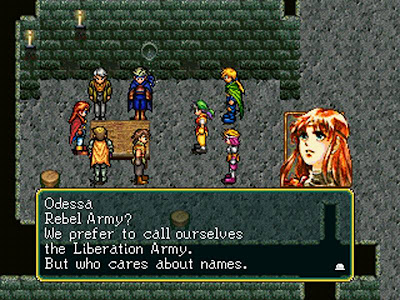 While, with such a large cast, the game possessed its share of eccentrics, the strength of the story really lay in the humanity of its characters, most of whom had clearly definable concerns and motivations. McDohl's servants, Gremio and Cleo, followed him down his treasonous path, not for the sake of abstract beliefs, nor to settle personal scores, nor even out of loyalty to their master, but because, as his friends, they shared in his life and would go wherever he went. Odessa, the rebel leader, neither sought her position nor wished for violence, but recognized that what was clean and convenient was less important than what was right and necessary, and so she suppressed her fears and doubts before her followers in need of hope. Even Emperor Barbarosa, the focus of the rebels' enmity, did not begin his reign as a tyrant. He went along with Windy's plans, not, as she believed, because of her magical influence, but because he had fallen in love with her, and, ultimately, his human error cost him his empire.

One of the most poignant scenes near the end of the game involved a minor enemy character who could not have had more than ten lines in the entire game. But that brief, simple scene conveyed a pathos that few video games have ever even approached.

After vanquishing the imperial army, the liberation forces prepared to march on the capital, the golden city of Gregminster, also young McDohl's hometown which he had been forced to flee at the beginning of the game. A somber, muted version of the originally festive theme played in the background, barely audible beneath the sound of wind blowing through the now emptied city streets, as a single man stood between the liberation army and the gate to the emperor's castle. That man was none other than Ain Gide, the last imperial general and also the same man who, at the start of the party's fateful journey, recognizing McDohl as the son of a friend, had deliberately looked the other way and allowed the tiny band of fugitives to escape on his watch, never expecting the boy to come back leading an army into his home. With the empire clearly already lost, the weary Ain Gide could only stand in vain defiance, too late performing his duty, but nonetheless determined to die for his country and his emperor.

After the party defeated him, McDohl's lieutenants, troubled by the senselessness of this death, wondered about the rightness of their actions:

Flik: No, this is wrong.
Viktor: Yes, he was wrong. But just as some things can be right and useless at the same time, can't something be wrong. . . and priceless?

There was nothing more that could be said on the matter, and so McDohl and his fellow rebels could only carry on fighting for their own values.

One final item of note was the cover art to the North American release of the game. It was a relic, one of the last holdovers in fact, from a time when, instead of simply retaining the Japanese covers, American branches of Japanese game companies would commission original, presumably more "mainstream" art done by people who knew virtually nothing about the titles they were working on. The competently painted but awfully generic fantasy artwork depicted a random group of unidentifiable characters, drawn in a style that in no way resembled the art within the game itself. Curiously, once the CD case was opened up, the Japanese cover was right there on the front of the instruction manual. (Yes, even though Suikoden was a one-disc game, it, for some reason, used a double-sized jewel case, so the manual was hidden inside.) 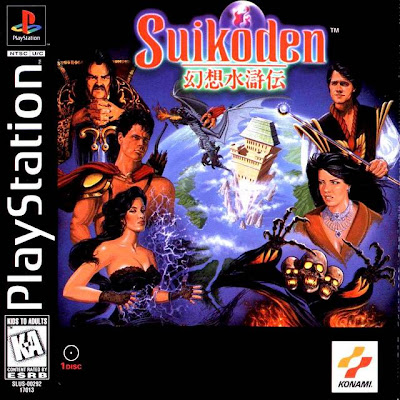 It's little wonder that, for the "cover" image for the PlayStation Network downloadable release, Konami opted to use the artwork from the original manual instead.

A largely unassuming yet magnificent title, Suikoden remains one of my favorite RPGs of all time. The unique character recruitment system essentially made for the most compelling and rewarding side quest of any RPG, while its stark tale, far ahead of its time, of a land brought to ruin by human folly but then saved by human will, has stayed with me ever since. It was the sort of experience that I now hope to find every time I take on a fantasy-themed RPG.
Posted by Henry at 6:04 PM

So do subsequent Suikodens and Suikogaidens get their own "Essentials" listings, since you didn't leave a blurb at the end discussing them?

I considered doing all of them as one entry, but I decided that the better installments merit their own listings as much as any other games. Later posts might be shorter, however, to avoid repeating myself.

And it's a pretty serious insult to all the other covers that you actually included Karnaaj Rally on that list. The others may have missed the mark, but I don't think Karnaaj Rally even had one.