I'd estimate that I've played over fifty role-playing video games over the years, and this was where it all began. The 7th Saga, published by Enix in 1993 for the Super Nintendo Entertainment System, was the first RPG I ever played and also one of the worst. Known in Japan as Elnard, the Produce-developed title was a fairly traditional RPG that adhered very closely to the Dragon Quest formula.

The story of The 7th Saga took place on the world of Ticondera, where the beloved King Lemele, a son of the legendary Saro, had recruited and trained seven apprentices. As the game began, Lemele announced that their five years of training had come to an end. He instructed them to set out in search of the Seven Runes hidden throughout the world. Whoever found the Runes would gain "tremendous power" and "become the leader of this world!" Presumably, Lemele meant to have that apprentice succeed him as king.

To start out, the player would select one of the seven apprentices to be the player character. Kamil Dowanna, a human knight with a strong sense of justice, was the most-balanced character, combining strong attack and good equipment options with mediocre magic. Olvan Jaess, an aged dwarf hoping to use the Runes to restore his youth, was similar to Kamil, but stronger and slower. Valsu Saizer, the righteous human priest, could learn every healing spell in the game, but his offense was limited to the basic Ice spell. Lejes Rimul, an evil demon and dark wizard, who thirsted for the power of the Runes, could use nearly every offensive spell. Esuna Busy, an elf and the lone female apprentice, possessed probably the best mix of spells, as well as the highest magical potency. Wilme Pelin, a useless alien with a bad attitude, could not equip any weapons or armor, had almost no MP, and basically relied on his high speed and HP to get him through. Lux Tizer, a member of the machine race of Tetujin's, whose origins had been lost to time, wanted the Runes to unlock the secrets of his own history. Possessing the greatest defense, his only weaknesses were a lack of speed and MP.

After making your choice, you would then set out immediately on your quest for the Seven Runes. In contrast to something like Final Fantasy IV, the game featured a very sparse narrative, inviting players to just wander according to the geography of the world, moving from town to town and dungeon to dungeon, picking up clues on the Runes' locations. Along the way, you would run into the other apprentices, and some might offer to join you, but it was not possible to have more than one partner. Also, since the player character would claim any Runes found, it wasn't clear what they hoped to get out of joining you. Unfortunately, the player's choice of character had almost no impact on the story. The player character would never speak, nor would your choice affect how others acted toward you. 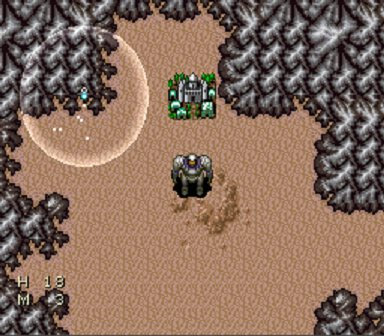 The game's best feature was probably the Crystal Ball, which served as a radar on the field. The Crystal Ball marked all enemies and towns, as well as the locations of nearby Runes. Instead of being entirely random, monsters would appear as moving dots on the radar. All these years and games later, I still consider it to be the best encounter system in any RPG I've played. Less annoying than random encounters, it also avoided the sense of dread that could come in games like Chrono Trigger, where you could see the enemy in your way and know that you could not avoid them. While the enemy dots moved quickly and unpredictably, there would still be occasions when I would simply find myself "in the zone" and be able to snake my way through a floor of a dungeon without running into any encounters. On the other hand, if you wanted to level-grind, you could simply stand in one place, while the monsters came to you.

The game's other interesting feature was that it used only two buttons, A and B, along with the directional pad, but it was possible to play the game one-handed, substituting L and SELECT for A and B. I found myself doing so more often that I would have expected, and it's a shame that the option is not more common.

Like I said, The 7th Saga was the first RPG that I ever played. My older brother had picked it up hoping probably to get in some quality questing in between releases of Final Fantasy games. He picked Kamil as his character and made it maybe halfway through the game before realizing that it required far more level-grinding than he was prepared to put in. After one too many deaths at the hands of the overpowering Flame enemies, he gave up and replaced it on the shelf, where it would remain for years until I decided, on a whim, to pick it up. I was not that heavy into gaming at the time, but it was summer break, and I had nothing to do. It also seemed a shame to me to have this expensive game just lying around with no one playing it.

I chose Lux for my character, as I had seen my brother's Kamil repeatedly torn apart by enemy attacks, and Lux's high defense stat seemed like the best way to avoid running into that problem. I was somewhat taken aback, however, to find that the bird enemies outside the first town could tear apart even Lux in very short order.

It didn't take me long to realize that this was the sort of game where you would have to commit yourself to going out into the middle of the field with the sole intention of grinding until your character dropped dead, at which point you would find yourself waking up at the nearest inn with half your money gone, essentially payment for the experience you earned before dying. That was how the game was played, and it was unapologetic about it, even encouraging the player to exchange money for gems to prepare for such scenarios. Gems could not be spent, but they could be resold at full value, and enemies would never take them, so it was prudent to convert all your money to gems while traveling, swapping them for gold only when you needed to make a purchase. I spent three summer days out in those fields, just fighting and dying, but, at the end of it, my Lux was prepared for anything. It's not the sort of thing I would or could do now, but, at the time, I didn't really have anything else to compare it to, and, besides, as a kid during the summer, I had the free time available. 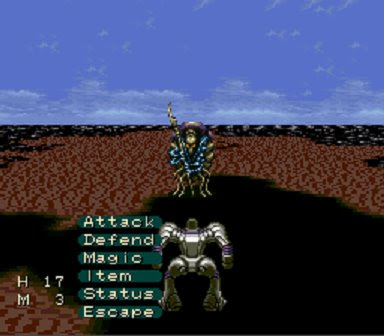 The best and worst parts of the game were perhaps the battles against the other apprentices. As mentioned, the player would periodically run into the other characters in towns, and, while some would happily join the player, and others would politely decline, there were also those who would attack the player outright to eliminate the competition. These one-on-one duels were the toughest fights in the game. These rivals would gain levels at the same pace as the player character, so it would not be possible to level-grind against them. Most of the characters could dish out damage close to their own HP, so, win or lose, in theory, these should have been short affairs. In practice, that was only the case if you died immediately. Attacks missed frequently, so you always had to prioritize healing, rather than counting on your next attack to finish them off. It then become a marathon, as you waited patiently until your own health stabilized enough for you to risk an attack. The cleric, Valsu, was by far the most dangerous. Though he wielded only an Ice spell, it was enough to take out Kamil in a single casting, as I saw happen to my brother multiple times. He also possessed the Elixir spell, which fully restored his HP and MP. Even with Lux, I don't think I could have beaten Valsu without the stat-boosting powers of at least five Runes.

If you were defeated, not only would you lose half your gold, but the enemy apprentice would relieve you of any Runes you had obtained. Thankfully, in only one case was it absolutely necessary to take on a fellow apprentice. Midway through the game, you would come across a town which had been taken over by an apprentice using the power of one of the Runes. While it might have made for a great twist, sadly, the identity of this villain was randomized for each playthrough, and his dialogue and motivations would never vary to match the personality of the specific character. It hardly made sense for the virtuous knight, Kamil, to become a tyrant, but that was what happened in my game.

The heinous difficulty is what The 7th Saga is now best remembered for, but those who made it far enough might also remember the surprisingly convoluted ending. Here's how it went down (SPOILERS, highlight to read):

King Lemele, despite being only 100 years old, was somehow a son of the legendary hero Saro, who, 5000 years ago, battled the evil Gorsia. In the more recent past, Lemele had become a hero in his own right by defeating the demon Gariso, who despite his curiously similar name, was apparently completely unrelated to Gorsia. But Gariso was not dead and actually possessed the last of the Seven Runes. Once the player defeated Gariso for the last Rune, thereby completing the quest, Lemele would appear and surprise you by revealing that he was actually Gorsia. He had killed Lemele years ago and taken his place, then used you in order to help him gain the power of the Seven Runes. Gorsia would then zap the player character, sending them back in time 5000 years to when Saro and Gorsia originally fought. As it turned out, the legends were wrong, and Saro was the one defeated in his battle with Gorsia. It would then fall upon the player to defeat Gorsia in the past. The player's duel with Gorsia, though victorious, would end with the player character suffering a mortal wound. Saro, though himself dead, would then use his own flesh to resurrect the player, who would be reborn as Lemele, son of Saro.

Across some fifty RPGs, I've seen some wild stuff, and this was certainly up there. It had been hard enough trying to keep track of the various Gorsias and Garisos, but, then the game decided to throw in some headache-inducing time travel paradoxes during the final hours. So Lemele was actually the reincarnated player character? And also the reincarnated Saro? And Gorsia was Lemele? Did defeating Gorsia in the past have any effect on the present? After all, didn't that stuff already happen 5000 years ago? Would Gorsia/Lemele continue his reign of terror in the present, where the player character is no longer around to stop him? And Gariso really had nothing to do with Gorsia? Whatever.

For many years, The 7th Saga was a running joke in my household, the oft-referenced model of bad RPG design. But, looking back at it now, I realize it wasn't such a bad game. I even have a lot of affection for it. It probably wouldn't make my top twenty-five, no, but it did have a few good ideas, memorable tunes, and some nicely animated battle sprites. The story was not the best, but it was a mostly clutter-free adventure that gave players enough purpose while also allowing a measure of freedom. Really, the only barrier to enjoying the game was its ridiculously grind-heavy difficulty, which remains the highest of any RPG I've ever played.
Posted by Henry at 4:23 PM