Released in 2001, Sony Computer Entertainment's ICO may have been the PlayStation 2's first must-play title. Designed by Fumito Ueda, who emerged seemingly out of nowhere to become one of the PlayStation brand's greatest assets, the game was ostensibly a 3-D platformer with puzzle elements, but its brilliant artistic direction and groundbreaking design transcended any genre designation.

Players took control of Ico, the titular young boy with horns, who, at the tale's beginning, finds himself escorted, a prisoner, to an isolated fortress, where faceless horsemen seal him in a crypt, apparently as a sacrifice. Through a mixture of sheer will and panic, Ico manages to break out of the crypt, only to find himself completely alone in the abandoned and alien structure. The game hands control to the player at this point, and, lost and confused as Ico himself is, the player wanders directionless before happening upon the sight of a beautiful girl trapped in a cage.

The girl's name is Yorda, and, though herself a prisoner, the ethereal maiden shines like a beacon of hope to the young boy, who does not hesitate in freeing her from her cage. He attempts to communicate with her, but finds that she speaks a language completely foreign to him. Her mournful expression, however, conveys a longing for the life that they have both been heretofore denied. And so he takes her hand in a gesture that transcends any dialogue, ultimately defining both the characters' bond and the title itself. Thus begins the pair's unlikely quest for freedom. 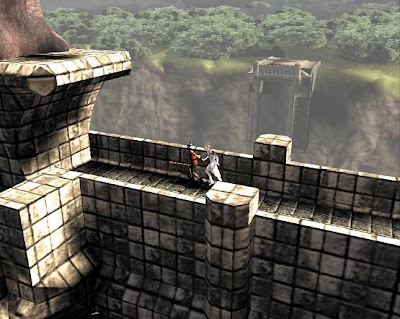 That was the premise for ICO, and that singular objective would drive the game from beginning to end. Taking command of Ico, and leading Yorda by the hand, the player would navigate the labyrinthine fortress, one room at a time, improvising paths as necessary on the journey to escape for the both of them, while fending off the ominous shadow creatures that would periodically emerge to try and abduct Yorda.

There was actually far more plot in the instruction manual than in the game itself, which would tell the player almost nothing through its roughly five hours of play. But ICO was a minimalist experience by design, and the less-is-more approach served to make it one of the most immersive video games ever. The limited dialogue invited players to construct their own narratives out of the bits and pieces of story suggested by the ancient and extravagant architecture. Featuring little in the way of actual music, the ambient soundtrack captured all the subtleties of the breeze and the birds. There was no heads-up display, but the game was not hiding any information, because Ico had no health meter and could only die by falling from a great height.

ICO's single greatest achievement may have been Yorda herself. She was not the first AI companion in a video game. She certainly wasn't the most helpful; some of the puzzles required her assistance, but it was more often the case that the puzzle itself would lie in trying to transport her past an obstacle that she could not physically surmount as easily as the more athletic Ico. She perhaps did not have as much in the way of personality as other characters; she didn't say or do much, after all. But no video game character before her ever seemed so convincingly alive. As with the narrative, precisely because Yorda was such a mystery, it was very easy to project a backstory and personality onto her. That is not to say that Yorda was devoid of character. In one of gaming's most nearly perfect moments, Yorda, eying a peaceful courtyard, races ahead of Ico with surprising energy. As she then wanders by herself, marveling at her surroundings, one might pause to observe her subtle hand gestures, the tilt of her head as she takes in the scenery, and her tendency to follow stray birds. 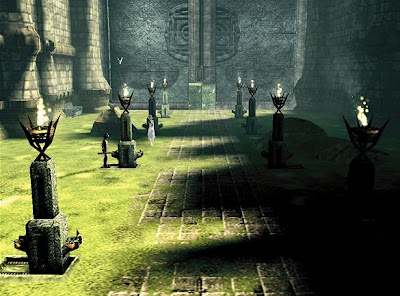 But, more than anything, what gave Yorda life was the relationship that the game silently forced the player to develop with her. Gaming is perhaps at its best when the game manipulates the player, rather than the other way around, and, in that regard, ICO was a masterwork. While most games before and after featured gameplay based around engaging our violent tendencies as human beings, ICO tapped into a different instinct: the instinct to protect. When the shadow creatures attacked, just as Ico did not hesitate in freeing Yorda, neither would the player hesitate to rush to the defense of this mysterious girl, about whom the player knew virtually nothing. There was no visceral thrill to be derived from the fighting itself. Combat was clumsy and limited. Rather, each encounter with the enemy was a desperate struggle to defend Yorda against those who would seek to abduct her. And, each time you managed to stave them off, it was a tremendous relief, and you hoped that they would not trouble her again--a far cry from other games, where combat would be the entire point.

While ICO was surely a title worthy of being described as a work of art, that did not make it any less a game, and the puzzle and platforming mechanics deserved high praise. The solution to every puzzle was readily visible in the form of a nearby lever, bomb, or movable cube. It would then be just a matter of managing the somewhat awkward physics to achieve the goal. For players who preferred to be challenged, ICO may have been on the easy side, but the game was designed to push ordinary players without ever frustrating them to the point of giving up and resorting to outside assistance. While it would have been impossible to balance the game for players of all levels, I found it to be just right. Many of the puzzles were also multi-part affairs, but could be approached one step at a time, allowing them to be complex without being convoluted. Even if it wasn't extraordinarily challenging, I still managed to derive great satisfaction each time from seeing it all come together, knowing that I did it on my own.

ICO was released in North America first, and it may have been rushed to market to beat heavy hitters like Devil May Cry, Grand Theft Auto III, Metal Gear Solid 2: Sons of Liberty, and Final Fantasy X, as well as the launches of the GameCube and Xbox, all of which came out later that same year. The North American edition was not only afflicted with godawful cover art, as opposed to the Japanese and European editions' quaintly surreal art drawn by Ueda himself, it also lacked all of the unlockable features that were added into those releases. Among these additions were an alternate gag ending, a hidden lightsaber weapon, translated subtitles for Yorda, and the option for a second player to control Yorda. Some nifty bonuses there, but none of them essential, and I actually have mixed feelings about those last two.

While I'll admit to being curious about what Yorda was actually saying throughout the game, it was obviously a very deliberate design choice to not translate her dialogue in the first place, and I would say that that decision was correct and highly successful, as it kept the relationship centered around the hand-holding, rather than any speech that the player would be unable to engage in.

As for the multiplayer mode, first of all, I can't imagine the game would be much fun for the second player, who would have basically no abilities and be extremely reliant upon the player controlling Ico. Also, the game would still have to focus first on Ico, and there would be many occasions where Yorda wouldn't even be able to follow him into the immediate area. More importantly, the bond that the player forms with the AI Yorda was one of the most fundamental aspects of the experience. Having a second player take control of Yorda would completely alter that dynamic, and, while having a human partner without the constant need for direction would likely make things proceed more quickly, it would also make for a far less remarkable experience, hence why I insist that two players is not always better than one.

ICO was not a perfect game. The controls were jerky, the AI-controlled camera not always helpful, and the game's heavy use of bloom lighting, though striking, could be tiring on the eyes after extended sessions. But it was one of the first great games of its generation, and it remains one of the greatest testaments to the emotional power of video games. There have been few films or novels that have managed to make me value so deeply the life of a fictional character, and the interactive dimension of the medium was an essential component in forming that relationship.
Posted by Henry at 5:25 PM