During one of my writing workshops from my college days, I was asked to watch an out-of-context scene from an unidentified film and then compose an impromptu narrative of the clip from the perspective of one of the characters. The clip, as I learned later, was from the film Lenny, and it featured Dustin Hoffman, as comedian Lenny Bruce, looking on admiringly as a female stripper performed in a club. The stripper was by far the most prominent character in the scene, so I chose to write from her perspective.

After being given a few minutes to write, my fellow students and I were asked to read our narratives aloud. By the luck of the draw, I was to go last. Before my turn came up, I listened as the first of six female classmates read from the stripper's perspective as a woman reluctantly performing in order to make ends meet and thoroughly disgusted by the creepy guys that comprised her audience. Two more girls then followed with like-minded accounts from the stripper's perspective.

There was a short reprieve as the one other male student, besides myself, read his tale of the horn player who provided the club's soundtrack. The three remaining girls then resumed the parade of hard-luck stories of strippers who hated their jobs. The consistency of these narratives was evidently noticed not just by me--their readers began to chuckle as each encouraged the next to try and outdo the previous in conveying their shared sense of revulsion, and the other guy made some lame joke that I instantly forgot. And then it was my turn.

I depicted the woman as a confident veteran performer, who gloried in the power she exerted on that stage over every male in the club. It had seemed a sensible angle, based on what little I knew about strippers, which was absolutely nothing. The actress's sultry performance also seemed to be leading me in that direction, but perhaps I was merely projecting my own thoughts onto the scene.

My reading was met with complete silence, which I was prepared for. I might have salvaged things with a joke or ironic remark before or after--something to indicate at least that I knew where I was and had been through the last seven readings. No judgments were uttered, but I had managed to kill the jovial atmosphere, and, after an uncomfortable pause, the instructor redirected the session toward other topics.

I was not a woman. Still am not. Obviously. Moreover, I apparently had no grasp whatsoever of the female perspective. To that, I might have countered that none of my female classmates were strippers, so their stories were barely better-informed than mine. But, then again, I couldn't be certain. Besides, they were perfectly right with their accounts, which were spun out of honest impulses. As for me, no matter how hard I tried to imagine myself in the position of that female stripper, the truth was that I just couldn't do it.

What does any of that have to do with the title of this post? Maybe nothing. Maybe, all these years later, I just felt a need to tell that story. So, without further ado, here is my list of the "Top 5 Greatest Male Video Game Characters Who Could Not Have Been Swapped Out For Female Versions":

SPOILERS FOR ALL TITLES REFERENCED 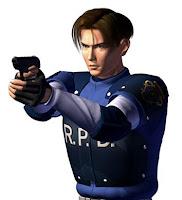 Leon's first day on the job as a member of the Raccoon Police Department happens to coincide with the T-virus outbreak of Raccoon City, which leaves him trapped and fighting for his life in the zombie-infested police station. That doesn't keep the rookie cop from falling instantly in love with fellow survivor Ada Wong, a mysterious woman who introduces herself by shooting at him.

Before the game is over, he'll go out of his own way to assist this uncooperative woman he knows nothing about, who is clearly hiding things from him, who shows no signs of returning his affections, and who is supposedly searching for her boyfriend anyway. Young Leon even ends up taking a bullet for her. Foolishness, perhaps, but also understandable in a crazy and pathetic sort of way.

An orphan whose only home is the academy, Seifer has the skills to be one of SeeD's strongest agents, but he lacks discipline and the proper attitude to perform effectively as a soldier. Recklessly independent, his "romantic dream" is to become a heroic knight, the likes of which simply does not exist in the rather sterile world of FFVIII. When the militaristic path of SeeD can't get him to his dream, he succumbs to the lure of the wicked Sorceress, who grants his wish by appointing him as her knight.

In a simpler story, Seifer, with his strength and spirit, maybe could have been the hero. But FFVIII is just practical enough to be inhospitable to his delusions of gallantry. He ends up coming off as simply some overzealous guy who's read one too many fantasy novels, or perhaps played too many JRPGs. His childish obsession ultimately provides an unflattering reflection of the male adolescent player. 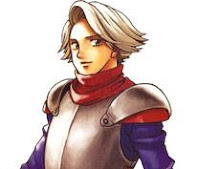 The son of a lord, Snowe believes himself to be the best friend of the protagonist (unnamed, so let's just call him Lazlo), but theirs is really more of a master-servant relationship. Nepotism sees him rising to captain ahead of the far more qualified Lazlo, but his incompetence in his first battle forces our hero to take command after Snowe flees like a coward. Feeling upstaged and emasculated, he uses his status to have his former friend banished.

But getting rid of Lazlo doesn't solve Snowe's problems. When the two next meet on opposite sides of a battle, Snowe has already lost his position through his own bungling. His noble status follows shortly after, and, as Lazlo wages a war against the Kooluk Empire, Snowe becomes a minor distraction of seemingly no consequence to the main plot.

Not only is Snowe not the hero of this story, but he's not even fit to be the hero's rival. Yet Snowe is not actually weak; his frustrations stem from his inability to live up to his own unrealistic expectations of himself. A spoiled upbringing convinced him that he was supposed to be a great man, when he's really just a pretty good one, and it's not until he's lost everything that he can finally pursue life with the clean slate that everyone ought to start with.

Steve Burnside (Resident Evil Code: Veronica)
Also gaming's greatest sad sack, Steve is not yet an adult, but his pitiful story is already an agonizing mass of misfortunes brought on him by his irresponsible father, whom he ends up having to slay (but it's okay, because, as a zombie, his father is technically already dead).

In a reprise of the Leon-Ada scenario, this time with the player character on the other side of the equation, Steve encounters a cute girl two years his senior, and, seeing her as the one bright light in a miserable situation, he strives to fulfill his self-imposed role as the "man" in their partnership. But Claire Redfield is no damsel-in-distress, and Steve wouldn't have a chance with her even if she weren't preoccupied with looking for her brother. Oh, and there's also the fact that they're trapped on an island full of zombies.

Steve actually does manage to save Claire on more than one occasion, but, somehow, unlike the macho movie action heroes who make it a point to look cool while doing good, nearly all of his big moments end with him embarrassing himself. The victim of a tragedy that he was too small and powerless to affect, for all his determination, he cannot hide the truth that he is still just a boy desperately seeking approval.


So, yeah, I only came up with four. Suggestions, anyone? A list constructed by just an individual can hardly be considered definitive. But, please, no Volgin and Raidenovich.
Posted by Henry at 11:49 PM

No Volgin? What about Otacon, then? Wasn't there some uncomfortable subplot about him shagging his mother, while his sister wanted to shag him? And he was in love with Sniper Wolf for some perverse reason?

Tragic stuff. Also disgusting. Of course, Otacon's sister essentially was the female version of him.

And Lazlo is not the character's official name, but it is the name used in the novelization. So I didn't just pick it at random.