The Essentials #35: Metal Gear Solid 4: Guns of the Patriots 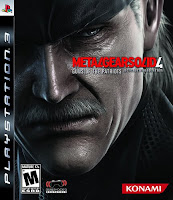 Arriving ten years after Konami's seminal Metal Gear Solid, 2008's Metal Gear Solid 4: Guns of the Patriots for the Sony PlayStation 3 was to be Solid Snake's final mission, as well as (once again) the last Metal Gear helmed by Hideo Kojima. Kojima, having expressed his desire to step back after Metal Gear Solid 3: Snake Eater, had already assigned Shuyo Murata, writer and director of Zone of the Enders: The 2nd Runner, to succeed him as director of MGS4, but, supposedly acceding to demands of both fans and crew, Kojima decided to return after all to direct alongside Murata, and the end result was a work permeated with the sense and soul of the series's original creator.

Picking up several years after Metal Gear Solid 2: Sons of Liberty, Guns of the Patriots finally put players back in the role of Solid Snake for the entire game. But it would not be the Solid Snake that players had been anticipating. An early piece of promotional artwork depicting a slew of returning characters, including Raiden with sword in one hand and his other arm cradling a baby, had given fans some idea of what to look forward to in the all-encompassing magnum opus. Solid Snake, front and center, resembled his gruff and bearded MGS2 self. By the time the first trailer debuted, however, Kojima Productions had evidently gone in a different direction. Snake was now an old man sporting a questionable mustache. He was not too worn to kick ass, but his deteriorating condition added a sad angle to his return. 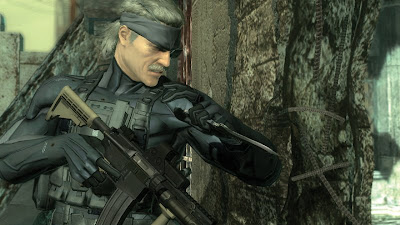 If Snake looked a little worse for wear, at least players could still be excited by the transition to a new generation of console hardware. After two installments on the PS2, Metal Gear was ready to take advantage of the power of the PS3 by delivering a gorgeous game that also broke significantly from the past in its mechanics.

Like Snake Eater before it, Guns of the Patriots introduced a number of annoying and largely extraneous new systems, although they were integrated more organically this time around. Though heavily promoted during pre-release, the new camouflage system again saw little practical use for most of the game. Removing the need to go into a menu and continually select different camo patterns, Snake's "OctoCamo" suit, like an octopus, could take on the color and texture of the surfaces that it touched. Again, I found little use for it and mostly ignored it, but at least, when Snake did adopt new camo, it happened dynamically with little thought on my part. The new "Psyche" gauge was similar to but a little more obtrusive than the MGS3 stamina system, since you could not as easily hunt and hoard supplies to keep it steady. Its hindering effects manifested with greater frequency than in MGS3, but it was still just an occasional irritation that would be dealt with as needed with items. The "Threat Ring," functionally comparable to the radar from Portable Ops, surrounded Snake only when he was crouching or prone and warned players when enemies were close.

The truly drastic changes came at the more basic level. The controls were completely overhauled. Although I had found the old Metal Gear Solid controls to be highly functional once picked up, they had, even by the time of Snake Eater, begun to feel outdated and clunky, with key functions spread across too many buttons. For Guns of the Patriots, Kojima Productions took some inspiration from Western-developed shooters, placing the fire button on the shoulder for a more natural pistol grip feel. Combined with a camera that built upon Subsistence's third-person view, adding an over-the-shoulder angle and the ability to move in first-person, the new controls allowed players to approach parts of the game almost like a third-person shooter.

These more action-oriented controls were important too, because the stealth elements were now far removed from the action puzzle feel of Metal Gear Solid. As advertised, the game largely dispensed with the old process of hiding in one place and slipping through observed holes in patrol routes. Security was tighter and Snake was slower, so it was now very difficult to progress without some proactive approach toward enemies. Moreover, in a world run on the "war economy," Snake would find himself walking into battlefields where mercenaries engaged rebels. Kojima Productions played up this element as one of MGS4's revolutionary bullet points, as Snake would have to progress through dynamic situations between hostiles and neutrals, and it was up to the player to what extent to involve Snake. In the finished product, however, this element turned out to be a minor feature during the first two missions, after which the rebels never reappeared. The hostile mercenaries would always hunt Snake, so the player's only choice was whether to aid, ignore, or antagonize the rebels. The latter option was idiotic (though easy to do accidentally), so, in practice, the decision was between moving along using the rebels as a diversion, or stopping to help the cause and earn some items as rewards. 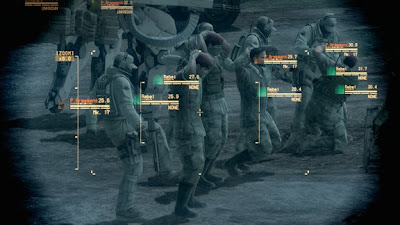 Reinforcing the interpretation of Guns of the Patriot as more of an action game was the alarming abundance of firearms. Snake's MGS4 arsenal was several times greater than in all of the previous games put together. All of those guns could furthermore be tuned and modified by paying the arms dealer Drebin.

Crammed full of set piece battles, some memorable sneaking sections, and multiple vehicular segments, it was the most varied Metal Gear yet, delivered in the most linear fashion. As far back as the original 8-bit Metal Gear, the series had employed Zelda-style "overworld" maps paired with an overhead camera. Even Snake Eater, although relatively free of backtracking, contained many large open environments to provide the illusion of a world to explore. Guns of the Patriots proceeded practically on rails. In fact, as noted, there were multiple on-rails sequences throughout the game, which was broken up into five acts set in self-contained locales. For a final installment, I thought the mission structure was a great idea that allowed MGS4, now a globe-trotting adventure spanning multiple diverse and exquisitely detailed environments, to be greater in scope yet tighter in presentation. And each successive act brought new highlights, including the spectacular return of Raiden in the epic Act 2, the confrontation with the ghosts of Snake Eater in the revelatory Act 3, and the haunting return to Shadow Moses in Act 4.

The downside was that you had to install each act separately. During my initial playthrough, I actually kind of appreciated the breaks that the installation periods represented, but the process made it beyond inconvenient to return to earlier segments, since you could not have more than one act installed at a time. MGS4 needed these installs supposedly because of how hard it was pushing the still young system. It was already the largest PS3 game yet, allegedly taking up the whole of a dual-layer Blu-ray disc only after cuts allowed it to fit. The only possible evidence of cuts was in the Codec conversations, which were scaled back considerably from previous games. The Codec screen presented a wide frequency band, but, across that entire span, there would remain for the entire game only two numbers, one at each end, that Snake could dial out to. It stuck me as odd visually to have all that empty space, but if cuts were made in that area, the decision must have been made early on. Snake had enough allies who would contact him from frequencies in that blank middle range, but it would not have made sense for him to call characters like Raiden and Meryl, who would not always be around or cooperative.

One guy you probably should have been able to call was Drebin. He certainly had a lot of nonsense to spew, as he would call Snake after every battle against the "Beauty and the Beast Corps" to tell you the tear-jerking life story of the poor girl you just obliterated. Somewhere between the sentimental personal narratives of Metal Gear Solid and the voiceless villains of Snake Eater, this was probably the worst approach yet, but the Beauty and the Beast Corps members themselves may have been the most awesome boss designs. No more giant shamans, bisexual vampires, or bee men. Yoji Shinkawa's designs blended, yes, beauty with beastliness, but also endowed them with the cool mechanical intricacy of his Zone of the Enders mechs. 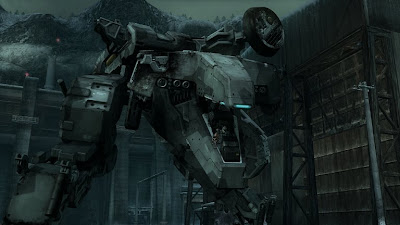 Intended to tie up every series loose end and conclude the story of Solid Snake, the plot would be incomprehensible to anyone who had not played through the previous MGS titles. But that baggage that was its greatest barrier to mainstream acceptance would also be MGS4's greatest asset to those legions of loyal fans who had been following the series for years. At times billed as the true sequel to MGS2, Guns of the Patriots managed almost miraculously to address all of the unbelievable questions raised in Sons of Liberty, albeit it had to cheat for some of its answers. Even more surprisingly, it added a whole new dimension to MGS3, tying it into the "La-li-lu-le-lo" convolutions in unexpected ways that gave the third installment brand new relevance, while completely altering how I perceived the story and characters of Snake Eater.

Few works of any medium have ever earned the emotional investment that this series had over its seven installments across more than two decades. Its fans had shared in the life of Solid Snake and the story of Hideo Kojima for maybe ten or even twenty of their own years. The finale to that arc delivered one of gaming's truly cathartic moments, as Snake walked, then crawled his way down that microwave corridor. Helping him along, the player needed only to press forward while tapping one button repeatedly to keep his health from depleting too rapidly due to the radiation. Mechanically, it was the simplest sort of gameplay the medium could offer, yet it was also one of the most awe-inspiring and emotionally rewarding moments in video game history. I've traditionally regarded rapid-button-press sequences as degenerate game design, the Metal Gear Solid torture sequence included, but, given all the buildup to that moment, I simply could not have lived with myself had I let Snake down. Pushing myself to my limit tapping that stupid button as fast as I could, I felt connected to Snake's drama in a way that just doesn't happen in non-interactive media.

No bizarre post-credits questions this time, Guns of the Patriots was as ever a story about existence and life, but it was this time less about seeking answers, more about living. Transcending the anguished explorations of gene, meme, and scene, it arrived finally at a simple peace for a simple man who, ever the dupe in a struggle between forces beyond his comprehension, had been stuck repeatedly undertaking the same bloody task he never enjoyed in the first place. It gave fans a conclusive and poignant ending to a saga that had allowed us for a short while to live beyond ourselves. Mechanically and narratively, the game's flaws were not hard to point out--the gameplay systems were bloated and its cut scenes, the longest ever, were even more so--but its grandness outshone any defects. Even as it catered to its hardcore fans, Metal Gear Solid 4: Guns of the Patriots remained utterly true to its creators. As long as that was the case, it could never be a disappointment to me.
Posted by Henry at 6:09 PM

What's next for MGS, in your wildest dreams?

So basically, you want the Metal Gears to be sentient. But what becomes of man? This is sort of a Terminator scenario.