The End of a Saga 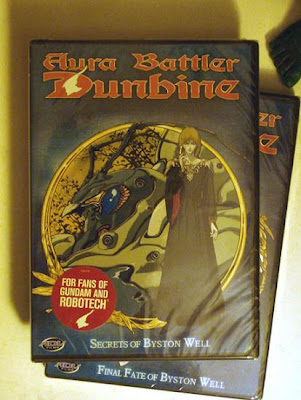 Yes, after a little over two years of searching, I have finally managed to acquire a copy of the Aura Battler Dunbine Vol. 11 DVD, thus completing my twelve-volume collection.

For those unaware, Dunbine was an 80s mecha anime from Sunrise and Yoshiyuki Tomino, better known as the creator of Mobile Suit Gundam. I picked up the first DVD after hearing that one of my favorite shows, Escaflowne, was heavily inspired by Dunbine, which was also about a teenager magically transported from modern Japan to a medieval fantasy universe full of giant mechanized suits of armor. The episodes I saw were pretty good, but buying the rest was not a high priority, and I only remembered it after I found volumes 2-10 for dirt cheap. Alas, 11 and 12 were less readily available.

Dunbine had been a commercial failure right off, so US license-holder ADV produced very few copies of the last two volumes. Thus, by the time I got around to collecting, volumes 11 and 12 were already among the rarest anime DVDs in America. I didn't like it enough to pay the ridiculous asking prices for each, but I lucked out on a copy of 12 about two years ago, and, with that purchase, I thought I could see the finish line. So close yet so far.

Obtaining 12 did not make 11 any less rare, and I was left waiting for lightning to strike a second time. As more and more time passed, this situation grew increasingly irritating. I was eventually driven to seek out alternative means of watching the episodes, but, as a collector, I couldn't stand having this gap in my box set. As far as I was concerned, the whole thing was worthless without 11, but, even as fruitless months turned to years, I couldn't abandon hope and give up on what I'd already collected.

A few weeks ago, a new copy showed up on the Amazon.com Marketplace for $79.99--less than half what it usually goes for on eBay. Checking the seller's info, I immediately recognized the username "shawnek." There was no doubt in my mind that this was Shawne Kleckner, CEO of The Right Stuf International, a small-time American anime licensor that has a much larger presence as an online store that specializes in all domestic anime and manga releases. I had done business with the store in the past and always come away satisfied. In fact, TRSI was where I got Dunbine 12, when, miraculously, a stock of about twenty copies just showed up at regular price. That was already well after it had started going for ridiculous prices elsewhere. TRSI must have found a forgotten stash, and I kept checking back in the hope that they might uncover a pile of 11s as well, but it never came to pass.

Fast forward to now, and, sure enough, "shawnek" must have found at least one stray copy in the warehouse, and, for $79.99, it would be mine. I was maybe a little disappointed that he decided to go the Amazon Marketplace route--clearly, he wasn't comfortable listing it on his own always customer-friendly TRSI at such a markup--but the price was still a steal compared to what anyone else would ask, while, at the same time, I suppose it had to be just high enough that the buyer would have to want the item itself and not the mere hundred bucks from flipping it. All things considered, I'm satisfied with this transaction.

And thus ends at last the saga of my search for the complete Dunbine.
Posted by Henry at 10:09 PM

Congratulations, Dunbline. Now could I interest you in a $200 copy of volume 12?