Hols: Prince of the Sun

Browsing through Hulu's free movie collection to see if there were any gems hidden among the piles of Lifetime Movies on offer, I came upon an old cartoon titled Little Norse Prince Valiant (1968). It sounded vaguely familiar, and, on reading the description, I realized that this was a localized version of the Japanese anime Hols: Prince of the Sun, the first film ever directed by Isao Takahata (Grave of the Fireflies). Fellow Studio Ghibli co-founder Hayao Miyazaki also worked on the film as an animator.

I had never seen Hols, but I had heard it described before by anime historians as a landmark work and essential viewing for Ghibli buffs. Although it was a commercial flop upon its original theatrical release, it sparked a move away from the mostly Disney-esque fare that Toei had been putting out at the time. Many would credit this movie as the turning point that opened Japan's eyes to the broader artistic potential for animation as an auteur's medium. The version on Hulu is maybe not the best way to view Hols; it's pan-and-scan, and the print shows its age, looking like someone's personal copy taped off TV (and, this being Hulu, there are also commercials). But, hey, it's a free presentation of a movie that's hard to come by in the US, and there's still enough there to appreciate beneath all the grain.

Yes, it's a charming film, if also dated and somewhat juvenile, better appreciated with some context and historical perspective. Ironically, for all that is made of how this picture established anime as something distinct from the Disney formula, in a lot of ways it more closely resembles classic Disney animated movies than it does, say, Akira or Ghost in the Shell. Of course, I would also contend that the Ghibli movies have a lot more in common with Disney than with almost anything else out of Japan. But Hols even feels somewhere between a Disney and a Ghibli film, with its musical numbers, its talking animal characters, and its heroic hero and villainous villain.

Takahata's direction helps the film to stand out. His framing is dynamic, and the opening action sequence, wherein our ax-wielding hero Hols does battle with a pack of wolves, is more sophisticated in its composition than anything found in contemporary Disney movies. The most inventive shot in the movie is a point-of-view shot from Hols's perspective, as he teeters on the edge of a cliff, hanging on by a rope whose other end is held by the evil sorcerer Grunwald. As Hols and the camera focus on Grunwald, the rope between them becomes a blur. 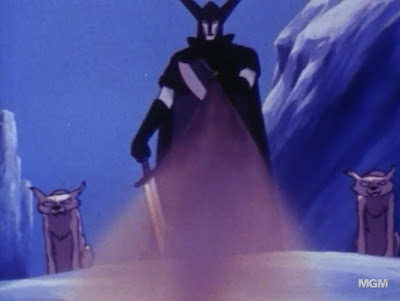 The characters are somewhat simple and crudely drawn, but the animation is smooth, notwithstanding that the story's two busiest action scenes are no more than slideshows of pans across static images.

Cinephiles can more closely dissect the film's visual aspects, but the narrative doesn't really get going until about halfway into its 80-minute run time. For the most part, this is a simple kids movie (well, actually, a little convoluted and nonsensical, but broadly conventional) about good versus evil. About halfway through, however, viewers are introduced to the character of Hilda, who (SPOILER) is Grunwald's sister, sent to sabotage Hols by pretending to be his friend. It is upon Hilda's arrival that we begin to see the more Ghibli, less Disney side to Hols. Hilda is the only interesting character in the story, and I would say that, beyond anything Takahata contributes to the film's technical aspects, it is Hilda particularly that makes Hols: Prince of the Sun a historically noteworthy and memorable movie.

For the historian, Hilda is notable for two reasons. First, she prefigures the strong, independent female characters that audiences have since come to identify with Studio Ghibli, Miyazaki's works in particular. No mere damsel in distress, she is a pivotal agent toward the outcome for either side. Second, in a story that is otherwise fairly black-and-white, with a very Disney-esque villain, Hilda occupies a gray area. She is not either wholly good or wholly evil by nature, but she operates according to a continually developing set of perceptions and values, with good or evil results.

It is that latter dimension to the Hilda character that most distinguishes Hols from a Disney movie. It challenges its young viewers to try to understand why good people might do bad things, which actually isn't that hard a concept to convey when you respect your audience. I don't imagine, for most kids, that it's very long after they learn the rules before they start knowingly breaking some of them. Maybe the real lesson is that it's hard to be good. Maybe real life is, to some extent, a good-versus-evil narrative, only, instead of it being you versus the bad guys, the struggle is more internal within each of us. That is the struggle within Hilda that the movie openly and earnestly depicts. In this way, Hols manages to engage kids on a poignant level beyond most kids cartoons even over 40 years later, by speaking to parts of them that most cartoons would prefer to ignore or deny.

I wouldn't say Hols is a very intellectually challenging kids movie; most of it is inexplicable fantasy nonsense, somewhat clumsily told. But it's more emotionally complex than most American cartoons, its darker layers perhaps its most resonant. Although it's a tad crude by modern standards, in its raw earnestness, it also feels more sincere than most stuff today out of either the US or Japan. It doesn't abuse the trust of its young audience to try to sell it much more than the artists' own values and vision.

Of course, this all doesn't make for an especially entertaining or enriching experience for more casual adult audiences today, but if you've got 80 minutes (plus commercials) to spare, maybe check it out and see where Takahata and Miyazaki kind of got their start, in the process also setting anime down its path toward something truly distinct from what cartoons had been up to that point.

I detect shades of The Black Cauldron, and maybe a dash of The Last Unicorn?

I don't remember much of The Black Cauldron, but, yeah, I definitely think Hols and The Last Unicorn are of a breed, sharing a certain sensibility distinct from the typical Disney movie. They're a little darker, a little rougher, a little sadder. And they come across as completely earnest, as though the filmmakers took the stories just as seriously and in the same way as the kids they were creating for. In that way, they also feel less manipulative, less patronizing.