Nausicaä of the Valley of the Wind

I first saw Nausicaa of the Valley of the Wind (1984) when Disney released the North American DVD in 2005, after having already seen Spirited Away (2001), Princess Mononoke (1997), and Castle in the Sky (1986). At the time, I was pretty disappointed with it, and I thought it looked and sounded incredibly dated. Now, going through the Ghibli movies in order, and a few years removed from my last having viewed any of Miyazaki's later works, I am better able to appreciate it in context and with more reasonable expectations, although I would still consider it among my least favorite of his films.

Although released a year before Studio Ghibli formally existed, Nausicaa's success is what led to the studio's establishment, and it is nowadays usually included as part of the Ghibli catalog. For the animation work, Tokuma Shoten Publishing contracted Topcraft, a studio which had previously done a bunch of Rankin/Bass features, including The Last Unicorn (1982). Many of the artists and staff at Topcraft would afterward join Studio Ghibli and work on Castle in the Sky.

I wish there were more to say regarding that lineage from The Last Unicorn to this, but Nausicaa is clearly Miyazaki's show, and I think Topcraft probably just followed along with his directorial style and specifications. A pre-CGI animated film, it's not as technically sophisticated as more recent Ghibli movies, and I found it somewhat visually bland overall. It's not a bad-looking film by any means, but the palette seems more limited than even the earlier Castle of Cagliostro (1979), and the settings—desert, valley, jungle, and cave—are dull and repetitive, which perhaps befits the barren, post-apocalyptic world of Nausicaa.

Nausicaa also marked the first collaboration between Miyazaki and composer Joe Hisaishi, although the eclectic, synth-heavy score is by far the most jarring part of the viewing experience. It isn't bad, but it definitely dates the production more than anything else.

But it's the storytelling that I find most problematic in Nausicaa. I tend to group Miyazaki's stories into a couple different categories. Castle in the Sky, Spirited Away, and Howl's Moving Castle are the “adventures.” My Neighbor Totoro and Ponyo are “kid stuff.” And Nausicaa and Princess Mononoke are his “message” movies. And that message, which is also present, though to a less heavy-handed extent, in nearly all his other movies as well, is always the same—basically, human beings are screwing up the planet with their destructive ways.

Nausicaa takes place in a post-nuclear holocaust world where the land is being overtaken by a “toxic jungle” swarming with gigantic mutant insects called Ohmu. And yet who are the bad guys in this story? It's us, of course! It's always us! First, human beings, with their war and pollution, brought the earth to its ruinous condition. Fine, I can go along with that. But, not only that, now that we've come to this point of having a cancerous forest of death and these insane, monstrous bugs bearing down on us, we are the ones still in the wrong to be fighting back? You mean these deadly and disgusting Ohmu are really naturally peaceful creatures, who only go a little nuts when we humans disturb their tranquility with our hostile aura? And that toxic jungle is actually a good and vital part of the ecosystem, even though it's completely lethal to us and kills all the things we depend on for life? And all our attempts to fix things will only lead to planetary death, because we don't know what's good for us or for the earth, but the earth itself does, so we should just submit ourselves to its will, as though it has one?

The story is not made any less insufferable by the character of Nausicaa, young princess of the Valley of the Wind, who is apparently the one good and capable person in the entire world of this movie. In The Castle of Cagliostro, the Clarisse character could have been seen by some as a “Mary Sue” type—an improbably immaculate heroine inserted into someone else's already existing fiction, to win the heart of the hero, charm all the other guys, and otherwise dominate the spotlight. Here, in a world that is entirely Miyazaki's own creation, Nausicaa almost comes across the same way. Unerringly wise and pure, Nausicaa strains the viewer's willing suspension of disbelief, while her humorless preachiness tries one's patience.

It's almost as if the characterization of Nausicaa is overly idealized in order to compensate for the film's otherwise pessimistic outlook. Indeed, it's always struck me as one of those odd contradictions of Miyazaki, that the guy who gives us such consistently crowd-pleasing family movies should also just as consistently come across as a cynical grump in interviews. But the cynicism is there in his movies as well; remove Nausicaa from this story, and it becomes bleakly fatalistic. Perhaps that's how Miyazaki really sees things, and a hardened adult viewer might agree with that part and declare Nausicaa an out-of-place unrealistic element. On the other hand, one has to remember that Miyazaki writes for children. At the age that he's speaking to, kids probably shouldn't be feeling any sour grapes toward cartoon characters, but maybe they can actually look to Nausicaa's example as something to aspire toward. Maybe inserting these triumphantly optimistic characters then is Miyazaki's way of inspiring and giving hope to the kids who are his own small bit of hope.

But, for me, it's far more amusing to observe how quickly things unravel whenever Nausicaa is not around. Early on, her village is subjugated by troops led by Princess Kushana of Tolmekia. Before Nausicaa is then sent away as a hostage, she asks for her people's cooperation. It's not long after Nausicaa is gone, however, before rioting breaks out in the Valley of the Wind. Later, when a stampede of Ohmu threatens both the villagers and the occupying Tolmekians, and Nausicaa is nowhere to be found, everybody is just resigned to depending on the strongest leader figure around, who happens to be Kushana. And what is her plan? Why, she's going to unleash a “Giant Warrior,” one of the living nuclear weapons that previously ravaged the earth. Things go about as well as you would expect from a hopeless bunch improvising one inadvisable strategy after another. But these are the parts that totally ring true to me!

Speaking of Kushana, it's also interesting that, as little faith as Miyazaki seems to have in humanity, he is also known for eschewing flatly villainous characters in his movies. Although the closest thing the story has to an antagonist, Kushana's not really evil. She's not conflicted like Hilda from Hols: Prince of the Sun either, but she's an adversary who sees herself as the good guy. To me, that makes her a far less emotionally resonant character than Hilda, but she is nevertheless my favorite in this movie. Voiced by Uma Thurman in the English dub, she gets all the best lines. Remarking on the left arm she lost to the insects (and which perhaps drives her Ahab-like crusade against the Ohmu), she says, ever proud, “And whatever lucky man becomes my husband will see worse than that!” 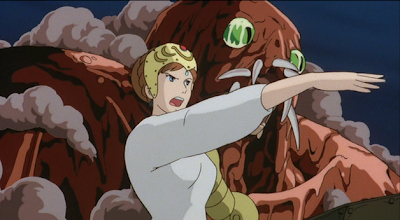 She also plays a key part in one of Nausicaa's more memorable scenes, the aforementioned unleashing of the Giant Warrior, which provides the most visually striking image in the movie. The creature is something out of a nightmare. It is monstrously powerful and menacing in appearance, yet straining just to hold itself together, its flesh oozing off the bone, as though its mere existence entails the most agonizing exertion against biological limitations imaginable. I was strongly reminded of the similarly grotesque Eva Units from Neon Genesis Evangelion, and it came as no surprise to learn that the animator in charge of the scene was none other than a young Hideaki Anno, later the creator of Evangelion.

There is at least one other scene in Nausicaa that might fairly be called “great.” Occurring about an hour in, it's animated in a stylized manner resembling pencil sketches, and accompanied hauntingly by the sound of a young girl's humming. It features a child Nausicaa trying in vain to hide a baby Ohmu from her father, who insists that humans and insects cannot live together. Half a dream, half a memory, it lasts two minutes and afterward is not remarked upon. But those two minutes manage to convey all that the story intends for the viewer to understand about the quality of Nausicaa's character and about the Ohmu, and the scene nearly redeemed both those elements for me. If only Miyazaki could have shown a little more restraint throughout the rest of the movie.
Posted by Henry at 7:52 AM

Man you bring a very negative attitude to the movie man, your not doing anything for all the other Henry's