Devil May Cry was a great game. Sadly, its sequel was not.

Perhaps the success of the first game led Capcom to rush forward to capitalize with a quick follow-up; development on the sequel apparently began while the original team was still busy with the first game's localization, much to the shock and disappointment of that title's director, Hideki Kamiya. Or perhaps Capcom, sensing that the title had franchise potential, wanted to reassert that its intellectual properties could and did exist independent of any specific individuals involved in their creation. In any case, development on Devil May Cry 2 was instead handed to director Hideaki Itsuno and Capcom Production Studio 1, which had mostly fighting game credits to its name. The result, released for the Sony PlayStation 2 in 2003, was surprisingly not a gutless rehash of the sort Capcom had often historically been identified with, but, in hindsight, a rehash might have been preferable, as the numerous design changes effected by the new team were the very things that made DMC2 a massive disappointment.

The problems began with the sequel's drastic and absolutely unnecessary reinterpretation of its main character, the über-cool Dante, who had been a large part of the first game's appeal. In DMC2, in addition to giving him a different voice actor, already making it hard for fans to recognize him as the same character, Capcom stripped Dante of most of his personality. DMC2's Dante still had the extreme confidence of the original, but his cool turned to frigid cold, and the old trash-talking and swagger were nowhere to be found as, at the behest of some random supposed acquaintance of his father, he sleepily took on a city-hopping fetch-quest that he barely seemed invested in. Not only was the new Dante boring, but he himself seemed bored! And who could blame him? Even forgiving for a moment the deficiency in character, DMC2 was a complete bore of an action game due to the two major and interrelated departures from the brilliant original in the areas of difficulty and level design. 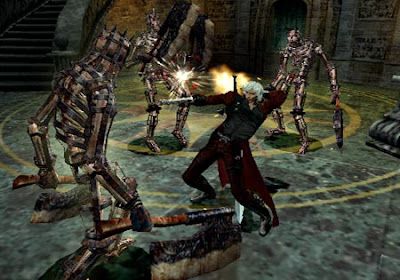 The original DMC was a very challenging game even on the default normal difficulty level. Although I was able to finish it, I'd always believed that difficulty should be a selectable option rather than a basic feature forced upon all players, and so I counted myself among those who thought the game was probably too hard for its own good. While its genre-redefining mechanics should have positioned it as the action game of its generation, its often unforgiving nature ultimately limited its appeal and confined it to the hardcore pile. The DMC2 team was obviously receptive to this criticism, and one of their declared directives was to make the sequel more accessible. Unfortunately, they overcompensated and ended up making a game that, on the default difficulty, was virtually devoid of challenge. The mostly docile enemies of DMC2 could easily be dispatched using Dante's twin handguns alone, and, in fact, the level designs practically demanded that the player approach the combat in this manner.

Aside from the difficulty, the other common complaint against the original was that the fixed cameras, while more helpful than in Resident Evil, could still become obstructed in cramped quarters. The team behind DMC2 chose to address this issue by implementing more open outdoor environments. On the surface, this was already a bad decision, as, while DMC2 was not less technically sophisticated than the original, its stages definitely looked worse and showed the graphical limitations of the PS2, whose power the original DMC had been one the first titles to really show off. The system was clearly better at rendering the polished marble and ornate shapes of the original's Gothic castle than the brick surfaces of the sequel's worn urban streets, and, thus, DMC2's humongous stages consisted of just rough, muddy textures that blandly repeated. But it was the gameplay that really suffered as a result of the change.

While it may have made the camera a non-issue, the shift to open environments gave enemies too much space to dance around in, with the result being that foes always seemed distant, encouraging the player to simply snipe them from afar with firearms rather than attempt to move into range for melee attacks. Indeed, after a few frustrating attempts early on to chase them down, only to find that my sword swings would quickly send them flying off into the distance again, I just gave up and proceeded to pummel them with the pistols. Thus, the addictive and creative combo-based engine that was the basis of DMC's combat gave way, in the sequel, to some of the most mind-numbing gameplay imaginable as the player was left with little choice but to tap the shoot button repeatedly to auto-aim at often off-screen enemies until the cessation of their yelling alone signaled that everything was dead. The worst part was that, although Dante was practically invincible while employing this "tactic," even against bosses, DMC2's guns were not actually significantly more powerful than the puny firearms of the first game, where the various ranged weapons inflicted very little damage and generally had more specialized uses (the pistols, for example, gave Dante extra hangtime when fired in the air). The guns in DMC2 had maybe a little more staggering power--enemies were effectively robbed of all action or mobility once caught in the barrage--but they still didn't do much damage, so it would take forever to dispatch a single foe. But what choice did the player have, when enemies were so insistent on keeping their distance by exploiting the open fields? Never mind that there were tons of flying enemies that, no matter how determined you were to play the game with the sword, were just an unbearable chore to get at with Dante's limited aerial melee attacks. 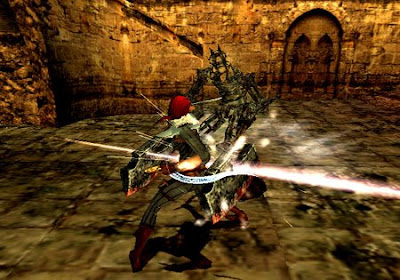 Thus far, I've consistently identified Dante as the player character, but DMC2 actually introduced a female co-protagonist, the mysterious Lucia. With a stony personality to match DMC2 Dante's and a ridiculous accent that may have been the precursor to Fran's in Final Fantasy XII, she was even more of a departure from the badass attitude of the original game, but I could at least appreciate the gesture in including a female character to play as, especially considering so many fans had been clamoring for a playable Trish from the first game.

Mimicking the format of the beloved Resident Evil 2, DMC2 assigned each character a separate disc and encouraged players to play through both in order to get the full story. Unlike RE2, however, it didn't matter in what order the player completed them, and, actually, the two characters' paths were largely identical, making it quite the slog to get through the second after completing one. In fact, I was not able to pull it off. I persevered through the Dante game to arrive at a brief and forgettable ending followed by no credits, and so I assumed I would have to complete both discs in order to get the full ending. After about three stages of the Lucia game, however, I just couldn't take any more of the exact same mind-numbing gameplay that I'd already experienced. Not only were the stages mostly recycled from Dante's, but all of Lucia's moves were effectively the same as Dante's. Although she wielded twin daggers instead of a sword, and throwing knives instead of guns, her basic melee combo was functionally the same (and still mostly ignored), while her infinite throwing knives operated just like Dante's pistols. Once again, I was just tapping the fire button over and over again until my enemies stopped screaming. (Or maybe that was me screaming out of the madness the game drove me to...)

The loss of multiple fighting styles was another disappointment for fans of the first game's Ifrit gauntlets. While Dante and Lucia could pick up new swords/daggers, the weapons introduced no new attacks and offered only subtly different stats and ranges. The sequel did introduce some new techniques, such as running on walls and the ability to shoot in two different directions. The latter was mostly useless, the former entirely so. On the bright side, DMC2 started the characters with all the moves they would ever have, and the character development system was only for upgrading health and weapon specs. While it made progress a little less gratifying, I never liked the idea that Dante had to slowly earn attacks and abilities that seemed so fundamental on replay. It also kind of destroys the narrative when the player has to earn back abilities that the character has already gotten in a previous game.

In terms of other things the sequel actually got right, the move away from a unified castle environment, instead favoring truly self-contained stages, more firmly established the franchise's identity as something distinct from Resident Evil. The new function of the L2 button to instantly cycle between guns did not add a lot since the handguns were almost always the answer, but the feature certainly prefigured the real-time weapon switching that became a huge part of Dante's game in later installments. While the gameplay was mostly a bore, there were occasional good moments, including one memorable section where Dante had to pull a switch and then race to the door it opened before it automatically shut itself again. He could only close the distance in time by running a perfect course while also utilizing the super speed of his Devil Trigger state, which was itself time-limited. And the final few stages actually featured some indoor environments where the close quarters allowed Dante to pull off his still-satisfying sword combos. In fact, during those sections, I thought the game became very good. It was too bad that they came only so late in the game.

One final thing I should mention is the unlockables. I wrote in my post about the first game that I actually played through the game a second time on hard mode just to unlock an honestly pretty lame costume that had no real effect whatsoever on gameplay. In DMC2, there were yet more lame costumes, but the big reward for beating hard mode was nothing less than the ability to play as Trish, who supposedly had most of Dante's moves from the first game, including Ifrit's hand-to-hand attacks. That sounded like a completely awesome bonus, but I never even tried to unlock it, and I think it's a testament to just how intolerable DMC2 was, that I couldn't even get myself to fully complete one playthrough for a reward that sounded so much better than the one I fought through the first game twice to earn. It makes me kind of mad, frankly, and, because of that one enticement, I still can't entirely rule out giving the game one more try in the future.

Setting aside all the irritating behind-the-scenes politics, Devil May Cry 2 was an unusually ambitious sequel by a team that, no doubt, had good intentions in trying to address the major complaints against the first game. Unfortunately, they went too far in the opposite direction, not only losing much of what made the original stellar, but also, in the process, delivering a game that, even judged on its own, didn't work at all. Considering all their sensitivity in gathering feedback about the first game, I don't understand how the sequel's far more obvious flaws could have escaped their notice. Focus groups should have been fleeing toward the exit after the first few torturous minutes of tapping the shoot button repeatedly while staring at Dante just standing in the center of the screen firing at off-camera enemies. It remains by far the most disappointing sequel I've ever had to endure.
Posted by Henry at 1:44 PM