As a player raised on console video games, I never had much experience with the point-and-click adventure genre that was principally the domain of home computers. One prominent example of the genre, ICOM's Déjà Vu, was originally, as I only just learned, a 1985 Macintosh release, the influential first title in ICOM's "MacVenture" series that later included Shadowgate and Uninvited. Kemco published a port of it in 1990 for the Nintendo Entertainment System, and that was the version that I played and enjoyed as a child.

The game began with you, as protagonist Ace Harding, waking up in a bathroom stall with a throbbing headache, covered in someone else's blood, and with no memory of who you were or how you ended up there. Checking the mirror above the sink, you would be startled by the unfamiliar face staring back. Exploring the deserted building, you would come across the corpse of a man who had clearly been shot to death. While the grisly scene still didn't ring any bells, it was apparent that you were in a bad situation, and the cops were probably to be avoided until you sorted things out on your own. Thus the nightmarish adventure began, with the game narrating in second person as you roamed the town gathering clues that might help you piece together your identity and situation. 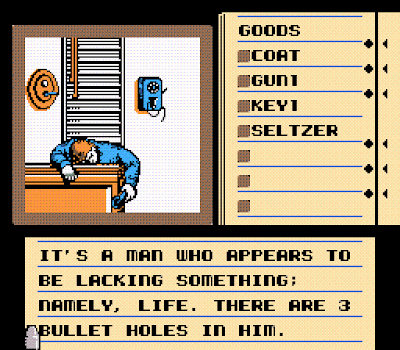 Then as now, nearly all console video games were based around violence, with only some occasional sports/racing and block puzzle titles thrown into the mix. Déjà Vu, as a true adventure, was a rarity in the medium. Certainly, the mystery gameplay could be likened to a puzzle, and there were violent moments, but, for the most part, the player would just move from location to location, using such menu commands as "Examine" and "Open" to thoroughly investigate one's surroundings. Practically every desk drawer, coat pocket, and wastebasket would yield vital clues to guide the player toward the next step. The leisurely pace, requiring no manual skill whatsoever, was unlike any game I had ever played. The nearest experience I could think of was those gimmicky Choose Your Own Adventure books that I never quite enjoyed as much as some children, probably because, despite their promises, they typically offered little choice and just progressed along a handful of basically linear paths. The mystery of Déjà Vu could end with only one solution, but the interactive format of the game, forcing the player to click on every onscreen object in order to get the next line of text, provided a much greater sense of immersion, and, as a result, even some of the wrong turns that invariably led to the game over screen felt more like real choices.

And, yes, I did try to shoot everybody I came across, but only as an experiment to test the narrative's limits. With one exception, the result was always either my arrest or my death. While it tempted the player with a selection of three firearms and plenty of ammo to spend, the game featured only one instance where the gun was to be drawn on a human being. The deliberate decision not to build the game around the usual thrill of violence was impressive and refreshing. 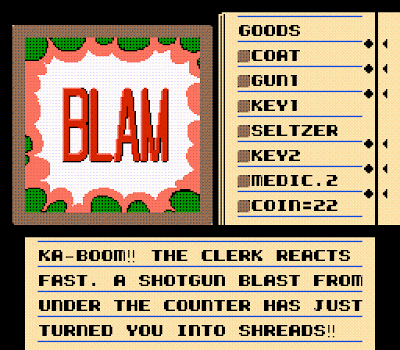 Déjà Vu was notable on the NES, not only for its unique interface, but also for its noirish aesthetic. The story was set in Chicago, and an in-game newspaper placed the events right after the attack on Pearl Harbor. The game wasted no time in thrusting the player into a suffocating and incomprehensible situation, which felt much like waking up into a nightmare. As a chronic headache continually intensified to life-threatening levels, the bleak urban environments and subtly menacing score made for an ominous atmosphere that placed the player right there with the amnesiac protagonist on his desperate and solitary journey. Some occasionally dry and cynical responses when observing items and surroundings meanwhile provided a humorous reflection of the protagonist's gumshoe personality.

In a lawless time long before ESRB ratings, Déjà Vu featured a remarkably mature murder mystery story that, had it been a movie, surely would have been deemed inappropriate for younger audiences. While the NES library had no shortage of carnage-filled titles that would, these days, probably merit M ratings, it was less often the case that games would genuinely offer adult themes over plain action. By non-game standards, Déjà Vu was not particularly smart or sophisticated, but it was a tale of adult characters with adult motivations. I played through the game dozens of times in my youth, but, even as I solved it, I don't think I ever fully comprehended the motives behind the crime until recently, when I played through it again as an adult.

Granted, as a kid, I wasn't really concerned with the details. I just liked feeling like a detective, which was obviously what Ace Harding was, even though he wouldn't remember it until late in the game. Scanning rooms for notes that would name addresses leading to other rooms and other notes was great fun for a young would-be PI, but I honestly never considered that there was an actual human element to the crime. It probably didn't help that the game never allowed the player to really confront the criminals who had attempted to frame Ace for murder, instead forcing you to collect the evidence that would see the law prevail on the right side. 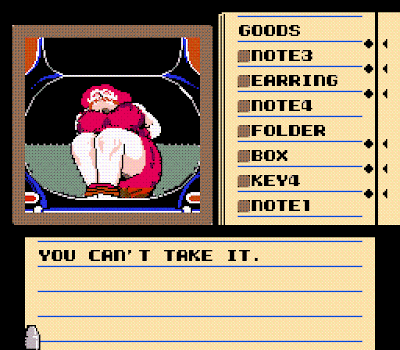 The game ostensibly tested one's investigative skills and reasoning by giving the player little direction that one did not have to independently uncover, but the gameplay often came down to trial-and-error and featured a few truly abstruse and/or arbitrary puzzles to protract about fifteen minutes of content into maybe an hour-long experience. For example, the player would come across several locked doors during the course of the game, and most of them could only be opened by finding the right keys, but, midway through the game, there would be one ordinary-looking door that had to be forced open by shooting the lock, yet the game would not advise the player in any way toward this solution that had never been an option before. Also, even after the player finally managed to solve the case, it would not be safe to face the police until the protagonist had first dumped his gun in the sewer and burned all the fabricated evidence that was meant to frame him for murder. If the cops found any of that stuff on you, you would take the rap even if you had just as much evidence naming the real culprits. I guess that's the justice system for you.

There were also a number of game over scenarios that were plain cheap. If the player wandered screen-by-screen east along the main street, the last screen would depict a construction zone, where the game would, without warning, report that the protagonist had fallen in a pit and died. Thankfully, the player could save anywhere and was allowed a limited number of continues from right back before any fatal decision, but it was unfair design all the same.

The game's biggest issue, looking back, might have been the point-and-click interface that did not translate gracefully to a control pad input. It was a clunky system, having to switch back and forth between an inane number of menu options using the digital directional pad to scroll around in lieu of a mouse, but I didn't find it to be significantly worse than a menu-based console role-playing game like Dragon Warrior, which was designed for the NES. Still, it's not something that anybody should ever want to go back to.

As one of my most-played 8-bit games growing up, Déjà Vu didn't quite inspire me to hunt down other examples of the genre, but I would be reminded of it every time I enjoyed survival horror titles like the Resident Evil series or visual novels such as Phoenix Wright, which tackled adventure in much the same manner, favoring true exploration and investigation over action and combat.

A sequel, Ace Harding: Lost in Las Vegas, was planned for release on the NES and was even previewed in Nintendo Power, but, although it lingered in the upcoming releases list for many months, it would not arrive during the console's life cycle. It was not until 1999 that that version of the sequel was bundled together with the first game for release as Déjà Vu I and II on the Game Boy Color, a system that I decided to skip.
Posted by Henry at 11:55 AM

I had Deja Vu and Shadowgate for the Mac when I was five years old. Unfortunately I never played through them myself, although my sister really liked them. A scene early in Deja Vu involving an alligator in the sewer scared me into not touching the game again, and the game over screen of Shadowgate (the Grim Reaper) gave me nightmares.

(Seriously, though, the GBC version is rated E for "Animated Violence" on the ESRB site, and I guess they would know...)