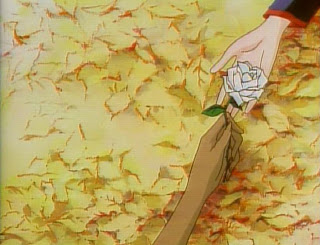 Only in the realm of anime could one find excitement in the announcement of a new domestic edition, in standard-definition DVD format, of material already previously released on Region-1 DVD.  But, yes, this is exciting because, after all, it's Utena, one of the most literary works of serialized moving-picture storytelling.

To clarify the headline, word came out of Anime Expo last week that Nozomi Entertainment had secured the North American license for Revolutionary Girl Utena--both the 1997 television series and the 1999 film.

Central Park Media originally released the first 13 episodes of the series to home video here in 1998, but contractual difficulties held up the rest of the series until CPM was able to release the remaining 26 episodes between 2002 and 2003.  After protracted financial problems, CPM filed for bankruptcy last year, although their Utena license had likely expired before then, as the DVDs had long been out of print.

Although most of the CPM DVDs are not all that hard to come by in the secondhand market, it can take some doing to assemble the full set of 10 discs (plus the movie, which is still available new from a handful of retailers).  For such a critically acclaimed series, one might have hoped that another company would pick up the rights and offer a reprint.  Many fans, however, had resigned themselves to the reality that, as it was in CPM's days, the TV series was still an exceptionally difficult license to negotiate.  Since it also now qualified as old and was never mainstream in America to begin with, it was doubtful that the hassle and expense would be worth it to any of the potential distributors.

A smaller, enthusiast-oriented operation, Nozomi Entertainment is actually just a division of The Right Stuf International, which operates principally as an online retailer.  TRSI stands to profit on the merchant side, no matter who releases a title, so it usually only picks up licenses that the bigger companies have already passed on.  These are niche or older titles that have merit in TRSI's eyes, even if they are not likely to be big sellers.  These people are clearly themselves lovers of anime, in touch with fans and treating them to premium packaging and occasional bonus goodies.  I've been happy to support their work thus far (you can look for my name (among a thousand others, ahem) in the "special thanks for pre-ordering" section of the Emma: A Victorian Romance box sets), and I'm obviously very excited to see what they have in store for Utena fans.

The one thing they don't do is produce English dubs, but they've already stated that their Utena release, due sometime next year, will include CPM's old English track.  Hopefully they will also carry over CPM's notable extra features--exclusive interviews and commentaries by creator and director Kunihiko Ikuhara--which were uncharacteristically substantial for an anime release.
But I'll be happy just to see Utena available again in America.  It is too great a series to simply fade away, and I would encourage everyone to support Nozomi's release.  If you've never seen it before, then this is a second chance to experience probably the finest television anime of all time.  (No, I don't guarantee that it will change your life.  I'm not a sucker.)  For fans who already own the CPM release, this new edition will be sporting much improved remastered video taken from the 10th anniversary Japanese DVD release.  (Yes, it's still only DVD, but I should at least be able to get a better screen capture for my profile pic.) 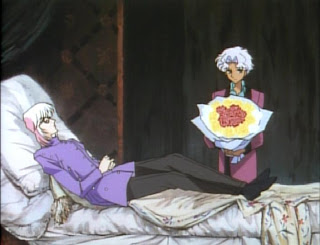 I've been insanely excited about this since I heard about it, but I don't know any hardcore Utena fans who share in my joy. T^T

Rest assured, you are not alone.