WARNING: SPOILERS REGARDING WHO GETS SHAGGED 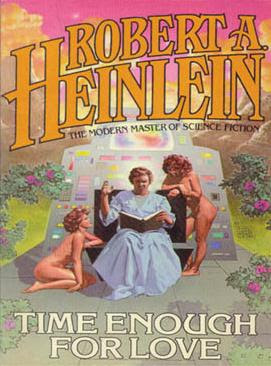 (from the back cover)

The capstone and crowning achievement of Heinlein's famous Future History, TIME ENOUGH FOR LOVE follows Lazarus Long through a vast and magnificent timescape of centuries and worlds. Heinlein's longest and most ambitious work, it is the story of a man so in love with Life that he refused to stop living it; and so in love with Time that he became his own ancestor.

I just finished this today after reading during lunch breaks over the course of, I would guess, about three months, though it felt like much longer. It was the first Heinlein novel I'd ever read, and I've consequently lost all interest in reading anything else by him. Yes, the back copy makes it sound quite enticing, and the cover art is outstanding. But, alas, this is an example of why books must not be judged by their covers. That I made it to the end owes to a mix of perseverance, boredom, and maybe a slight masochistic streak.

It starts out as a mock biography of Lazarus Long, aka "the Senior," a man who has lived for so long that, by the time of the book's present, practically all humans living throughout the galaxy can trace their lineage to him. Rather unusual as biographies go, it is presented in the form of compiled accounts both by Lazarus himself and by his acquaintances, switching between his own first-person narration, the first-person perspectives of other characters, and some omniscient third-person sections, inexplicably including some episodes that do not include nor involve him in any way.

Early on, as if to establish a structure, Lazarus proposes a "Scheherazade deal," whereby he commits his descendants to listening to his nightly tales, simultaneously satisfying their curiosity about his life and his longing for their companionship. The first story is about a man so brilliant and capable that he devises all manner of convoluted schemes, always in the interest of engineering the laziest lifestyle possible. It lasts about twenty pages. The second story is about incest, and it's on that subject that Heinlein focuses all of the remaining tales spanning over 400 pages.

Heinlein, through Lazarus and other characters, repeatedly asserts that incest is a social taboo and legal term, not a biological one. The practical problem in mating with a family member is that doing so carries a high risk of passing on any defective genes that relatives might have in common. As long as there is no risk of producing bad babies, however, then there is apparently nothing wrong with it. In fact, Lazarus himself was the product of selective inbreeding to reinforce good genes. And, by the year 4272, there are no women left who aren't descended from him, so it's all incest to a degree for the still virile and libidinous Senior. Fair enough, I suppose, but Heinlein isn't content to just make his point and move on. At the first occurrence of incest in the narrative, Lazarus pauses to mull over the relevant genetic data, exhaustively breaking down every possible result to ensure that there is no possibility of producing defective offspring, which is the one and only sin he acknowledges.

That first lengthy and highly technical explanation already grows quickly tiresome, but the book is extremely repetitive regarding the matter, not only obsessively taking the plot back to incest over and over again, but also each time going on at length about why and how, philosophically and scientifically, it's perfectly fine and good. By the end of the book, Lazarus has shagged his adopted daughter, his nurse descended from him, a computer AI given female flesh using his DNA, the mother of the aforementioned nurse, his own mother, and twin female clones of himself, whom he has raised as both daughters and sisters. The book is more ambiguous as to whether he also shags the male relatives that he lives with, though it is early on established that homosexuality is commonly accepted and practiced in the future setting. Some might say that the book is about love, not sex, let alone incest, but then why must it be that every single relationship in the book is in some way incestuous?

Aside from this uncomfortable topic, which some readers may better appreciate, I had other issues with the book.

Now, I don't claim to know what goes through women's minds, but none of the females in this book struck me as remotely authentic. Every single female Lazarus encounters inevitably--usually very shortly after meeting him--ends up begging him to let her bear his child. Why? Because he's the Senior, possessing the finest set of genes in the universe! Obviously! What better incentive need there be for these women to throw themselves at him?

Yes, I despise Lazarus Long. That's really the heart of my problem with the book and perhaps that has left me closed-minded regarding everything else. The sort of invincible superman that makes readers feel inadequate, he is a master of all forms of combat, though he is far too wise to engage in needless conflict. He is a man of strong opinions, which are invariably proven correct. During intermissions between tales, the reader is treated to excerpts from his notebooks, listing off various nuggets of wisdom collected by a man who has lived the equivalent of 300 lifetimes, with no end in sight. For example: "There is only one way to console a widow. But remember the risk." Another: "Darling, a true lady takes off her dignity with her clothes and does her whorish best. At other times you can be as modest and dignified as your persona requires." These self-indulgent segments in particular lead me to suspect that Lazarus Long is a thinly-veiled cover for Heinlein himself. So, yeah, I think I'm going to pass on reading any more of his works.
Posted by Henry at 11:21 PM

A note on provenance:

I found the book on my latest trip to Chicago. It was lying in the discards box outside the front door of Powell's, the premier used book store in Chicago, located on 57th Street in Hyde Park, just a short walk from the University of Chicago.

That such a masterpiece of literature from the silver age of science fiction, in near fine condition, should end up shuffled among aged economics textbooks and sub-Harlequin-grade romance novels is a travesty, I thought.

Who knew that the book would exceed even my lofty expectations! Can't wait to read it!