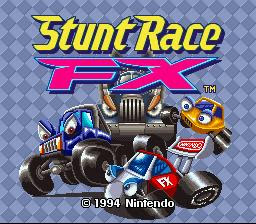 Stunt Race FX is probably the worst video game I have ever played, and definitely the worst game I ever owned. And, yes, that's including the literal garbage that was E.T. for the Atari 2600.
Developed by Shigeru Miyamoto's Nintendo EAD team, with assistance from Argonaut Software, 1994's release of Stunt Race FX (aka Wild Trax in Japan) for the Super Nintendo Entertainment System was the follow-up to the previous year's groundbreaking Star Fox. Powered by the Argonaut-designed Super FX chip, it was a racing game featuring the same 3-D polygon-based graphical style of Star Fox. While arcades had begun to make some progress with polygonal graphics, true 3-D was still a very new frontier, one which Nintendo was eager to pioneer on console. Naturally, not all of the early attempts met with success. Star Fox 2, for instance, never saw release, despite insistence that the game was complete. In my mind, however, the infamy of that affair paled in comparison to the crime of Stunt Race FX actually getting a release.

The game put the player in control of one of three anthropomorphic cars, with a motorcycle as an unlockable fourth vehicle/character. Also, a bonus mini-game tested the player's ability to navigate an unwieldy semi-trailer truck through gates slalom-style. The inclusion of the big rig could only be taken as a bit of tongue-in-cheek humor, considering that all of the regular vehicles already maneuvered like tanks. Underwater. 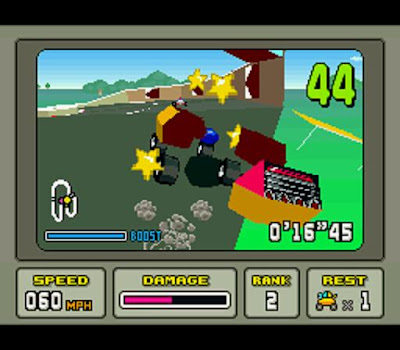 The game offered four modes, each one worse than the last. "Speed Trax" was the single-player grand prix mode. In addition to having to place against three CPU opponents, the player had to race against a redundantly brutal clock that continuously counted down, eliminating the player if it reached zero. "Stunt Trax" had the player pointlessly driving around an arena collecting stars. The game included no actual stunts to perform. Instead of offering car combat, "Battle Trax" was a one-on-one splitscreen race for two players. The really lousy part was that this mode included only four short tracks, compared to the sixteen courses in single-player. Also, if, say, hypothetically, you were so desperate to manufacture some sensation of victory, so elusive in single-player, that you stooped to setting up a two-player race with just yourself, the game would actually notice when any car received no input for three seconds, after which the AI would take over and proceed to kick your ass. Oh, and the last mode was "Free Trax," a time trial mode where you could use the motorcycle. Useless. 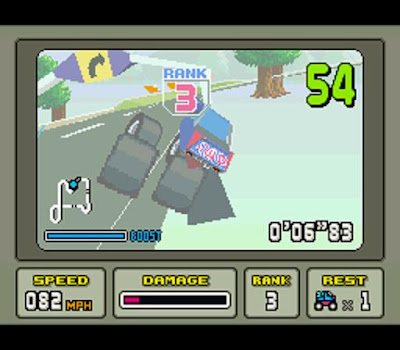 Visually, the game was an abomination. The primitive, low-poly graphics, which constantly tore themselves apart, could not compete with sprite-based racers of the time, but still images could never come close to conveying the full, unbearable ugliness of it all. The unstable frame rate often dropped to incomprehensible levels of choppiness, rendering the game completely unplayable. Also the HUD took up an inordinately large portion of the screen area, a problem that was further exacerbated when playing in splitscreen. 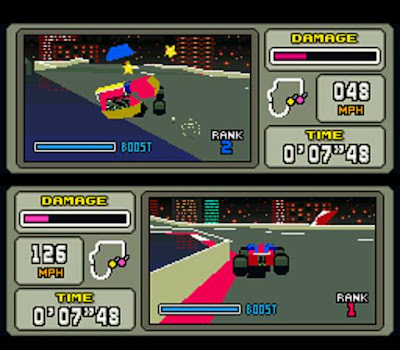 I think Nintendo itself must have been dissatisfied with the game's technical aspects, as it would not release another polygonal title for the SNES. Some years later, I read in a Nintendo Power interview that Miyamoto was disappointed with the system's inability to truly realize his visions for 3-D games, and, while no titles were specifically mentioned, I had to believe he was referring to Stunt Race FX. A dream that vainly reached beyond the grasp of 16-bit technology, the resultant mess left an unflattering impression of 3-D.

So turned off was I by the polygonal future as represented by Stunt Race FX (I never played Star Fox), that I predicted my departure from gaming, upon learning that Nintendo, Sega, and Sony were all going 3-D for the next generation. Mario 64? This Lego creature was not the character I knew and loved. Virtua Fighter? A blocky atrocity. Battle Arena Toshinden? A Virtua Fighter-esque atrocity. Ironically, it was a 2-D game, Street Fighter Alpha 3, that finally convinced me to make the jump to 32-bit with the Sony PlayStation. Even more ironically, SFA3 was actually sold out the day I got my PS1, so my first game for the console ended up being Rival Schools, Capcom's polygonal fighter. But I digress...

My blind faith in Nintendo should have already been shaken by the less-than-stellar Pilotwings and Super Play Action Football, but my fondness for their previous racing titles, F-Zero and Super Mario Kart, encouraged me to add another to my collection. Some positive press, hyping up the realistic handling and physics offered by the 3-D engine, further assured me that it would be a sound purchase. And, of course, there was this:

It was probably appropriate, given how often it was seen, that the best thing in the game was the "RETIRE?" screen, featuring a cute 2-D animation. 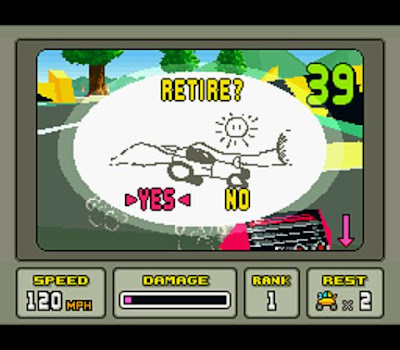 Aside from that, I suppose it had some decent tunes going for it, and this box art, featuring the clay sculpture work of illustrator Wataru Yamaguchi, who, ten years later, also provided the clay art for Pikmin 2: 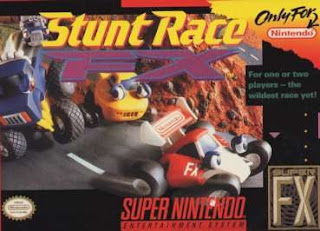 So in what sense are these "The Essentials"? Essential experiences in gaming? I can tell you I never needed to play Stunt Race to know how bad games could get. What it actually showed me was that I should never again buy a game without being very sure that I would like it.

I came up with "The Essentials" because I wanted a reason to post about old games. These are supposed to be mostly games I love, but I don't feel the necessity to establish a separate column for the bad games that I also want to talk about. In the future, maybe every tenth post will be about a game I hate.

The name shouldn't be taken too seriously. I couldn't think up a better name within the time I gave myself, so I ripped it off of Capcom's recent PS2 collections of Resident Evil and Onimusha. (I'll tell you right now, if I get to Onimusha 3, the post won't be full of praise.)

Like how on the Endurance stage of Rogue Leader, every tenth wave of Imperials was the "gimme" Lambda class shuttles who would give you an extra life.