I've played and enjoyed my share of Pokémon, but my first experience with the series was not very pleasant at all. Out of curiosity, I had decided to sample one of the early titles, probably Red or Blue, maybe Yellow. About an hour into the game, I was thoroughly unimpressed, even a little disgusted. The extremely basic Dragon Quest-level menu-driven combat was archaic even for the time. The single-minded storyline was complete rubbish, and there was something innately unsavory about the whole concept, which struck me as far too close to cockfighting. And the very first boss had completely annihilated me because it turned out that I had picked the worst possible Pokémon to take him on. Since the pathetic bug Pokémon I had caught randomly were no better, my only real option would have been to level-grind until I was sufficiently strong enough to brute force my way through. Well, I had zero interest in doing that, so I put it away, feeling thoroughly disappointed in Nintendo.

It wasn't until a few years later, when I tried Pokémon Stadium for the Nintendo 64, that I warmed up to the series and started to appreciate the depth and appeal of its gameplay.

The 1999/2000 release, developed by HAL Laboratory, rather than series creator Game Freak, was the first title to make use of the N64 Transfer Pak, which came included in the game's oversized box. The clear antecedent of the connectivity experiments of the GameCube and Game Boy Advance, the Transfer Pak allowed players to plug in select Game Boy cartridges to access special features on certain N64 games. In the case of Pokémon Stadium, the attraction of the device lay in the ability to import a player's exact team from Pokémon Red, Blue, or Yellow. The team could then be used in any of the main battle modes.

For multiplayer matches, Stadium was a great option, as the 3-D graphics on the larger space afforded by a TV screen offered a far more exciting venue, also allowing spectators to view the action. There was even an announcer shouting overenthusiastic phrases. On the downside, the game never actually showed the contact as Pokémon attacked one another. It would just show the one Pokémon performing the attack animation, then cut to a shot of the target reeling from the blow. The overlong animations also grew tiresome over time, and abundant transitions made for a much slower-paced experience than the Game Boy titles. 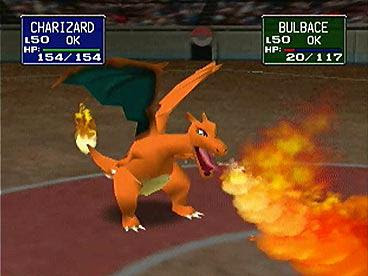 The single-player modes, meanwhile, offered plenty of challenges to test players who had already mastered the Game Boy titles. The game featured several "Cup" modes of multiple levels each, where players could compete in tournaments against AI trainers. More compelling was the Gym Leader Castle, where players could take on the boss trainers from Red and Blue. While veteran players would have already beaten them in the original games, these trainers now came with new tricks and Pokémon teams that provided fiercer challenges than anything experienced in the Game Boy titles.

For those unfamiliar, Pokémon utilizes traditional turn-based, menu-based combat. Parties are composed of up to six Pokémon, which fight one at a time but can tag in and out at the cost of a turn. The main twist is that every Pokémon has an assigned type (Fire, Water, Grass, etc.), which is strong, weak, or neutral against other types. A Pokémon's type can be as important, if not more so, than its level, as a savvy player can and often must abuse type advantage to overcome a higher-level foe.

In the main handheld titles, most opposing trainers, including bosses, employed themed teams consisting of Pokémon all of a certain type. This gave the characters themselves gimmicks, in lieu of actual personalities, but the one-dimensional teams were often too easily swept by a single Pokémon with a type advantage. Furthermore, most bosses didn't even have full teams of six. As a sort of "pro" circuit for players who had already made it through the Game Boy adventures and wanted more, Stadium offered tougher battles against trainers with more sensible and balanced teams, requiring that players employ deeper strategy in constructing their own teams. Winning all of the Cups and the Gym Leader Castle then opened up the opportunity to take on Mewtwo, essentially the final boss of the game. 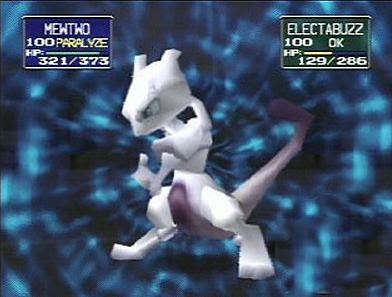 In many ways, Pokémon Stadium was a glorified expansion pack that relied heavily on the Game Boy titles. In my case, however, I didn't have any Game Boy team to import, so I didn't quite view it that way. For those who either, like me, had no Pokémon of their own, or simply wanted to play with Pokémon they hadn't yet caught in the Game Boy titles, the game allowed players to "rent" any of the then 151 Pokémon, minus Mewtwo, for use in any of the modes. The rental Pokémon came with pretty much the bare minimum stats for their levels, and their movesets could not be altered in any way. This left them at a clear disadvantage against legitimately-caught Pokémon of comparable levels, or against the slightly juiced teams of the AI trainers. Clearly, the game meant to encourage players to use their own Pokémon, and perhaps it wasn't thought very likely that a player could make it up to and past Mewtwo using rental teams. It was a credit to just how engaging the combat was that I ended up doing just that.

It was actually my younger sister, then an avid Pokémon fan, who had been playing the game until she got stuck on a frustrating match against Sabrina, the psychic gym leader, at which point I offered to help. Despite my limited experience with the series, I had played enough other turn-based role-playing games that I felt confident enough to at least give it a try. Freed of the burden of having to collect and train my own monsters, I began to see the depth of the combat itself. Unlike other RPGs I had played, the computer couldn't really cheat, as it was bound by the same limitations as the player. With levels being roughly equal, it really came down to who played the better match. In that sense, it more closely resembled the fighting games that I loved than the RPGs I had played, which typically required only that the player be at a high enough level for any given fight.

I didn't end up winning that first match, but I was intrigued and determined to try again. After my sister quickly led me through the basics of the Pokémon types, I came back with a different team of rental Pokémon and handily outmaneuvered Sabrina. From that point on, I was hooked. I found it both rewarding and liberating having to defeat my opponents through strategy and foresight, knowing that I couldn't rely on level-grinding to get me through. As I faced increasingly superior teams, my plan typically involved using status-afflicting moves to paralyze the enemy or put them to sleep, or lowering their accuracy or speed, then whittling them down with the most effective attack I had available. And, on defense, there were times when I'd have to sacrifice one Pokémon in order to save a more immediately valuable one. The Mewtwo battle was a particular highlight, as, at one point, I even had my Ditto use Mimic to morph into a mirror of the almighty Mewtwo, albeit one with inferior stats. Of course, I would still lose occasionally and each time come back with a better set of Pokémon, a tactic which would not have been feasible had I been required to catch and train all of my own Pokémon.

As a final bonus, the game included nine Pokémon-themed mini-games for up to four players. These were simplistic Mario Party-style affairs, but they provided an amusing enough diversion for younger players.

Pokémon Stadium was the Pokémon title that got me into the series, and, now, after having played so many others, I find myself really just wishing for another version of Stadium. It removed all the chaff of the monster catching and training, allowing players to enjoy the pure battling experience at their leisure.

This was actually the second Pokémon Stadium title. The original Pokémon Stadium was a Japan-only release that contained only forty-two Pokémon. Really, it was more of a prototype or demo for this game.

A third N64 installment, released in 2001 as Pokémon Stadium 2 in North America, offered more of the same but added compatibility with the second-generation Pokémon titles (Gold, Silver, Crystal). Regrettably, I never picked it up, as I was ready to move on to the GameCube by that time.

Since then, the series has been effectively replaced by Genius Sonority's console Pokémon titles: Pokémon Colosseum, Pokémon XD: Gale of Darkness, and Pokémon Battle Revolution. These titles carried on the ability to transfer teams from the portable games for battle on the TV screen, but the two GameCube titles were otherwise quite the opposite of Stadium, focusing on lengthy quests that played out like mediocre versions of the handheld titles. I haven't played Battle Revolution for the Wii, but, from what I've heard, it's much more of an expansion pack than Stadium ever was, as the rental options are far more limited, making Diamond/Pearl connectivity a practical necessity.
Posted by Henry at 5:06 PM