I've long been a fan of 2D fighting games, Street Fighter II having been one of the first video games that I really played seriously. In fact, I've probably logged more hours playing Street Fighter than all the other video games I've played combined. Yet, up until now, I'd never been able to get into the 3D fighters. I had dabbled with Soul Calibur II on the GameCube, but that was only because Link was in it. Once the novelty wore off, the massive move lists and unrelenting pace proved too intimidating.
Due to a misprice on Amazon.com's part, however, I was able to score Soulcalibur IV for the PS3 at substantial discount. Initially, I wasn't too excited about playing it, and I even considered flipping it for profit. After looking around online, however, one feature caught my eye.

All fighting games are inherently designed to be enjoyed playing against other people, but, as the genre has waned in popularity, it's become difficult to find regular competition. In lieu of this, the character creation mode has offered an unexpectedly engrossing experience for the lone player.

At first, I tried to design a cool-looking avatar for myself. With initially limited options and a lacking imagination, this yielded mostly disappointing results. Then I realized that every piece of equipment actually had associated stats, at which point my objective shifted toward maximizing my character's abilities. This quickly led to regret as I observed my finished product: a Frankenstein-esque design monstrosity. 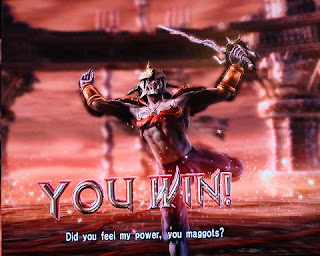 I couldn't help but question the developers' decision to integrate stats in this manner, thereby forcing a difficult compromise of form and function; I could already imagine some wizards figuring out the exact formula for an "ideal" fighter, thus leading to tons of guys across the world decked out in the same clothes. (Such a nightmare scenario could never really occur in a game of this depth, but that was exactly what happened in the case of The Con.) Even disregarding the stats, however, it quickly became apparent that my character would inevitably end up embarrassing just due to the fighting style I had chosen.

After sampling all of the original characters in the game, I had eventually settled on Amy's style as the basis for my custom design. Unfortunately, although my fighter was male, he exactly retained all of Amy's exaggeratedly feminine poses. This turned out to be the case for all styles derived from female characters--a grotesque side effect of the game's often blatantly sexist design. By this point, however, I was through compromising.

I began to simply embrace the system's charming inadequacies and turned my attention toward crafting a suitably flamboyant design to match my character's mannerisms. As humiliating as it might be to use such a design, it should be several times more so to be defeated by my well-muscled, deep-voiced dandy.
Posted by Henry at 9:49 PM