Speaking of Tekken and Wikipedia, the Tekken story makes for some surprisingly awesome Wikipedia reading. It's just a shame that, from my experience, even playing the games doesn't reveal much about the story. Tekken 6's story mode includes stylized summaries of the first five titles, but although it is pretty slick, it's basically incomprehensible to anyone who isn't already intimately familiar with the characters. No, I didn't get it until I started researching that Leo gender nonsense. I don't know that any of my readers actually care about Tekken, but I feel like people should know this stuff, because it really is quite amazing. For that reason, I'm going to try to summarize it here as best as I can.

In the prologue to the first chapter of the Tekken saga, Heihachi Mishima, head of the Mishima Zaibatsu multi-national corporation, tosses his five-year-old son, Kazuya, off a cliff, because Heihachi could never acknowledge a son too weak to survive and make the climb back up. Kazuya barely survives, but, his body broken, he is met by "Devil," who offers him the power to avenge himself against Heihachi. The five-year-old Kazuya accepts, at the cost of his soul.

Twenty-one years later, Heihachi decides to host the first "King of the Iron Fist Tournament" to attract the world's greatest martial artists, his grown-up son among them. Entering the tournament, Kazuya fights his way through to earn a final round match against Heihachi himself.

Father and son battle for hours atop the very cliff from which Heihachi once hurled Kazuya. Finally, Kazuya, juiced with the Devil power, emerges victorious, whereupon he evens the score by flinging Heihachi off the cliff.

So things are pretty simple so far. All this tossing of live bodies off cliffs is a bit extreme, but this is not too different from, say, the story of Fatal Fury, which ended with Terry Bogard jump-kicking his father's killer, crime boss Geese Howard, through the window of the top floor of the Geese Tower high-rise. It may even be considered comparable to Chun-Li and Guile's stories in Street Fighter II, albeit those ended in slightly less dramatic fashion.

Here's where things get interesting.

In a stunning twist, Kazuya Mishima, formerly the P1 default character and story protagonist, becomes the villain of the sequel!

Two years after Kazuya took control of the Mishima Zaibatsu by defeating his father at the King of the Iron Fist Tournament, the corporation has actually grown more corrupt than it ever had been under Heihachi.

Upon learning that Heihachi is still alive and seeking revenge, Kazuya, in order to lure out his father, announces the King of the Iron Fist Tournament 2, with a cash prize of a trillion dollars.

At some point during the tournament, Kazuya manages to impregnate Jun Kazama--an important development for later on.

As far as the tournament itself, it is this time Heihachi the challenger who confronts Kazuya in the final match. In the rematch, Heihachi proves the stronger Mishima, prompting Devil to take control of Kazuya's body. But even the full power of Devil's true form is no match for Heihachi. Devil flees Kazuya's unconscious body, which the triumphant Heihachi then dumps into an erupting volcano.

Seriously, does it get any more freaking hardcore than that? By the end of the first game, each Mishima had already tossed the other off a cliff once, so I guess Heihachi needed a volcano to top that. Also, considering that Heihachi originally threw his son off a cliff supposedly as a test, how many times is Kazuya supposed to survive the impossible before his father can just be proud of him?

And in the coolest part of the Tekken 6 prologue, the Tekken 2 overview is nearly identical to the first segment, only with the roles reversed.

Fifteen years since the King of the Iron Fist Tournament 2, the Mishima Zaibatsu, with Heihachi Mishima back in control, has ushered in a new era of world peace.

Meanwhile, somewhere in Mexico emerges a supernatural "fighting god" entity dubbed "Ogre," which begins targeting the world's top fighters. Among them is Jun Kazama, who, before falling to Ogre, instructs her fifteen-year-old son, Jin, to seek refuge from his grandfather Heihachi.

Heihachi takes in his grandson, training him in Mishima Style Karate over the course of four years, at the end of which Heihachi announces the King of the Iron Fist Tournament 3 as the venue for Jin Kazama to avenge his mother against Ogre. Unbeknownst to Jin and the other competitors, Heihachi actually wants to capture Ogre's power for himself.

At the end of the tournament, Jin faces and defeats Ogre but is immediately betrayed by Heihachi, who shoots his grandson in the head. Jin survives, however, thanks to the suddenly awakening "Devil Gene" inherited from Kazuya. Jin sprouts wings, becoming "Devil Jin," and defeats Heihachi before flying off.

So now this generational storyline has granted us a third Mishima, when already two seemed like too many. It will certainly not be long before there is enough fictional history involved in this series to rival all the Metal Gears and Resident Evils of the world.

Two years later, Heihachi, seeking to harness the Devil power exhibited by Jin, learns that Kazuya, who also possessed the Devil Gene, has been revived by the Mishima Zaibatsu's chief rival, G Corporation.

Planning to lure out and capture both Jin and Kazuya, Heihachi announces the King of the Iron Fist Tournament 4. (Sheesh, is this the only reason ever for holding the King of the Iron Fist Tournament? What happened to the days when the fight was everything? And is there really no better way to capture these Mishimas than by beating them down in single combat in a tournament?)

As Jin prepares to face Kazuya for a place in the final match against Heihachi, the Mishima Zaibatsu's "Tekken Force" soldiers ambush and incapacitate Jin. Heihachi, apparently still quite vital more than two decades since the first game, then defeats Kazuya and takes both him and the unconscious Jin to the Hon-Maru dojo in the woods.

At this point, the Devil power emerges in Kazuya once again and he defeats Heihachi. Kazuya then intends to take Jin's Devil power for himself, but Jin awakens and manages to defeat Kazuya. Before flying off again, Jin also gives Heihachi another ass-kicking for good measure, but, in order not to shame the memory of the pure-hearted Jun, he fights back the Devil Gene's urge to kill the old man.

In the immediate aftermath of Devil Jin's last rampage, the defeated Kazuya and Heihachi are ambushed by robots sent by G Corporation. Kazuya escapes, but the robots blow up Hon-Maru with Heihachi still in it.

The world believing Heihachi dead, the Mishima Zaibatsu nevertheless carries on with an unknown figure at the helm. The King of the Iron Fist Tournament 5 is announced, again attracting Kazuya and Jin, to no one's surprise.

Ultimately, Jin makes it to the final against the secret new head of the Mishima Zaibatsu, who turns out to be none other than Jinpachi Mishima, Heihachi's father. The founder of the Mishima Zaibatsu, Jinpachi had been imprisoned under Hon-Maru by his son, who stole the company from him. (Perhaps fear of the same fate is the real reason Heihachi threw Kazuya off that cliff. Makes me wonder, though, why these guys even keep extending the line, as it seems quite antithetical to the Highlander-esque game that drives these Mishimas.) As Jinpachi starved to death, Devil came to him, granting him the Devil Gene and keeping him alive (but driving him crazy) until the destruction of Hon-Maru freed him.

Tekken 5 was the one Tekken that I kind of played, but, although there were actually some dense character backstories narrated by Alucard from Castlevania: Symphony of the Night, the endings seemed mostly gag-oriented in nature. 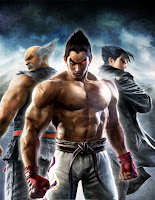 Fast-forward to the present, and we now know that Jin defeated Jinpachi Mishima to close the King of the Iron Fist Tournament 5. In the most shocking, almost Whedon-esque twist, however, Jin Kazama, the one remaining "hero" character, who never craved power as his father and grandfather had, has assumed control of the Mishima Zaibatsu. And he's the worst one yet!

Raising the stakes higher than ever, Jin openly declares war against all nations while firmly establishing the Mishima Zaibatsu as the dominant superpower. Mind you, this is not even Devil Jin, which historically has only emerged against Jin's will in desperate situations and these days exists in the games more as a dream character a la Evil Ryu. No, this is the real Jin, and that's a hell of a lot scarier than Devil Jin ever was.

With the entire world engulfed in war, only G Corporation, now led by Kazuya, can oppose Jin. Kazuya places a bounty on his son's head, to which Jin responds predictably by announcing the King of the Iron Fist Tournament 6.

With Heihachi, Kazuya, and now even Jin turning heel, it falls to another new Mishima to perhaps play the good guy. This time it is one Lars Alexandersson, an illegitimate son of Heihachi. Added as part of the Bloodline Rebellion upgrade of Tekken 6, he is the protagonist of the home version's story mode, which this time seems pretty dense. These modes have a lousy track record in Tekken--nay, in fighting games as a whole--but right now I'm genuinely interested to see if Namco has finally pulled it off (and if Lars can possibly break the curse of the Mishima bloodline).
Posted by Henry at 10:02 PM