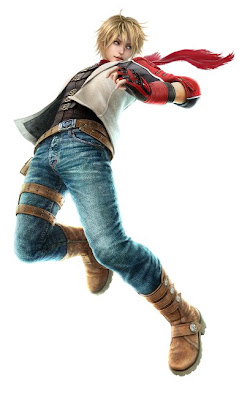 So I was flipping through the Tekken 6 art book when I came upon this chap by the name of Leo. Although I dabbled in Tekken 5, I don't actively follow the series, so I was not previously aware of this new character.

Seeing his design for the first time, I could only roll my eyes at Namco. While some have joked that, between Tekken 6's Bob and Street Fighter IV's Rufus, grotesquely obese Americans must be the new fashion in fighting games, it looked to me like Namco and Capcom had both also gone about refreshing their rosters by ripping off old designs from their perennially less prosperous arcade neighbor, SNK. But this was a considerably more blatant and direct theft, whereas Capcom had more just vaguely mimicked the King of Fighters aesthetic in cobbling together C. Viper.

Why, this Leo dude is just an even more effeminate version of Rock Howard! Could Namco be any more shameless?

Yet I found myself inexplicably and uncontrollably drawn to linger toward a closer examination.

And then a pause.

Wait, is this even a dude?

Frantically skipping to the concept sketches in the back, I found Leo listed within the "Male Characters" sub-section. Well, that answered that, right?

But then I read the accompanying comments:

Leo is the first character from Germany. From the start, the development team wanted to create a character that would be loved by fans regardless of gender so they made the gender of Leo ambiguous on purpose. Of course, Leo is just a nickname based on the character's name.

What exactly does Namco mean by this? Is Leo's gender a secret to be revealed in a twist ending a la King from Art of Fighting? Is Namco deliberately keeping it a mystery, maybe until the next installment demands it be addressed? Or is s/he seriously just one of "those". . . ?

This would not do. For some reason, I needed a straight answer badly.

I turned first to the official North American Tekken 6 site. On Leo's character profile, I found multiple uses of masculine pronouns in reference to the character. So that settled it, right? We had a definitive answer from an official source.

My mind still not entirely at ease, I did a little more research. Sure enough, the forums were telling me that these pronouns were a corruption of the original Japanese text. Japanese sentences do not grammatically require explicit subjects, so they are very often omitted, as happened to be the case in the Japanese version of Leo's profile. This poses a not uncommon translation conundrum with Japanese video games and anime, where there is perhaps a disproportionately high incidence of ambiguously gendered characters.

As if to confirm that the North American website editor had just chosen a gender for Leo at random without consulting a higher authority, the profile has actually since been updated to remove all gendered pronouns, referring instead to Leo now always by name.

That was only a minor victory for the it's-a-girl camp, however, and the extremely passionate debate, apparently raging across the Internet from the moment Namco unveiled this character almost two years ago, continues even to this day, the recent console release of the game only adding fuel to the fire.

Apparently in the Tekken 6 story mode Kazuya calls Leo a girl, but then Heihachi calls it a boy. Team Leopold notes that s/he is able to equip the males-only sledgehammer accessory, but Leona-ites counter that Leo's hair can also be customized with pigtails, which is otherwise only available to female characters. One side will point out that Leo is voiced by a female, but then the other will fire back that that female is none other than Veronica Taylor, using the same boyish voice that made her famous as the original English Ash Ketchum, the male protagonist of the Pokemon animated series. Mostly it's just people on both sides arguing that it should be totally obvious to anyone with eyes that Leo is a girl or guy.

Perhaps nothing better captures the bitter perversity than this, in which the self-appointed custodians of the Tekken 6 Wikipedia page debate Leo's gender--whether s/he is male or female, or whether there is even sufficient evidence to support the page's taking either side.

So there you have it--like Capcom before it, Namco has just made fools of us all. Personally, I'm just going to try to ignore it as best I can. 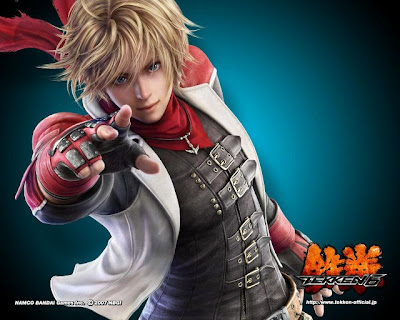