Konami has always been one of the biggest and best-loved of the Japanese third parties, but in recent years it has begun to feel more and more like just the Metal Gear publisher. If you're not a fan of soccer, Japanese rhythm games, or Lost in Blue, then the Konami catalog has been a pretty thin one thus far this generation. Castlevania has remained fairly prolific, but mostly in a niche handheld capacity. The increasingly mediocre Silent Hill series has been handed over to Western developers (and Castlevania may be headed in the same direction). Suikoden is in a limbo, with no clear direction nor identity anymore. The Teenage Mutant Ninja Turtles license now goes to waste in Ubisoft's hands, but it was already declining at Konami. What about Konami's other classic franchises--Gradius, Contra, Goemon? Well, they've been struggling as part-timers ever since gaming moved to 3-D.

In the cases of Contra and especially Gradius, they are a tough sell now because, even though these were successful games in the 8-bit days, the experiences were inextricably tied to the 2-D form. The 2-D shoot 'em up may be (along with fighting games) the most perfect design in video games. That is not to say that the shoot 'em up is the greatest genre in gaming, but only that no other genre is so completely invested in its specific gameplay. Even in the case of a classic 2-D platformer such as Super Mario Bros., it was not truly the mechanics that drew people in, but rather the high concept appeal of running and jumping in a virtual space. The game had to work well to serve that idea, but the concept was broad enough that the mechanics could have gone in any number of different directions while retaining the same essence. Thus was Super Mario 64 able to maintain the Mario feel while adding one whole dimension to play in. In the case of the shoot 'em up, not only has there never been a successful 3-D take, but there isn't any modern genre that even really approximates the experience of playing a shoot 'em up. The fast pace and constant progression are what define the experience, and no 3-D perspective could possibly facilitate the simultaneous shooting and dodging at a high speed. But just because it could not go into 3-D did not mean that the genre came to a dead end. Otherwise, Konami could not have come out with Gradius V, a high-water mark for the genre, released two generations into the 3-D era.

Released in 2004 for the Sony PlayStation 2, Gradius V was developed by Treasure, which actually began as a team of former Konami employees who had worked on the Contra series. Treasure's Ikaruga was, in my opinion, the greatest vertically scrolling 2-D shoot 'em up ever designed. Likewise, Gradius V was quite possibly the finest horizontal shooter of all time. 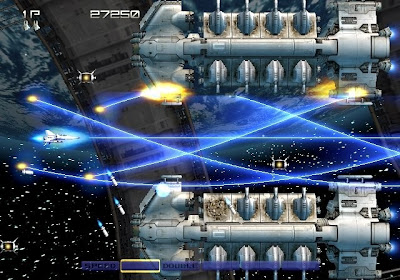 The difference between vertical and horizontal may sound minor, but they have evolved into separate categories within the shoot 'em up genre, albeit some of the distinctions have always seemed arbitrary to me. Vertical shooters operate from an overhead perspective, so unless the stage is set in outer space, the background would be the actual ground. They may have obstacles set along the left and right walls, or even in the center of the screen, but they tend to focus the player's attention more on enemy formations and weaving through bullet hells. In the side-scrolling horizontal shooters, there can be both a floor and a ceiling, allowing for much spelunking in enclosed environments. They can often be platformer-esque in their demands on the player's ability to navigate the geometry, apart from any shooting. I personally greatly prefer the action in the vertical games, but I'll concede that, on average, horizontal shooters tend to feature more thoughtful and diverse level layouts. In great examples such as Gradius V, the stages themselves can seem as alive and hostile as any enemies.

Indeed, one level in Gradius V actually confronted the player with an organic wall with no clear path through or around. Rather, you would have to blast your own way through the rapidly regenerating stage. Another instant classic had players flying through an asteroid field. So dense was the distribution of asteroids that, again, the only way through was brute force, and the larger rocks would break up into smaller ones a la Asteroids. Even more hazardous was the green gas that filled a factory area. In this constantly tilting stage, the deadly clouds would spill from all directions, and the player would have to somehow erase it all before it could reach the ship. When you finally broke clear of that area, it would only be to end up in a stage that scrolled backwards, rendering your forward cannons useless.

The most memorable design, however, revolved around time travel. Near the beginning of stage two, your Vic Viper craft would come across a temporal anomaly, out of which would emerge another Vic Viper. In fact, it would be the exact same ship and pilot, only from the future, and for a brief section of that stage you would be able to fight alongside your own future self. Then in the final stage, you would naturally close the circle by becoming that future Vic Viper. Even though you would have seen it coming, it was still a great twist when you learned how and why it had to happen.

Although the plot may have included time travel, it would not have been correct to regard the game itself as a throwback. I've not been altogether impressed with recent nostalgia projects like Gradius ReBirth and Mega Man 9, or even Contra 4, which developer WayForward more or less acknowledged was a love letter to Contra III from a team of fans who grew up loving that game. While I do appreciate the challenge in attempting to authentically recreate the look and feel of a past era, I would have greater respect for a sequel that attempted to push a series forward. The aforementioned were projects motivated by a reverence for the past, but I think a true sequel must rather look to the future. Otherwise, the best you can do would only be as good as what your predecessors already achieved years ago. It is both lazy and arrogant to suppose that there can be nowhere else to go, nothing else to try. The whole "ReBirth" designation implies that 2-D gaming died some ways back, but the only limits to 2-D remain the ones that developers would impose on themselves in this manner. I applaud Treasure, as a developer that has never stopped making 2-D games, for letting its work alone make the case that 2-D has never died. 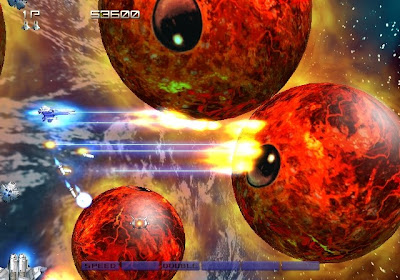 That said, Gradius V was still essentially a Gradius title, with plenty to please true fans of the series. The signature of Gradius was always the power-up meter that allowed players to decide in what ways to enhance their crafts--whether to increase ship speed, add missiles, upgrade cannons to lasers, etc. The most notable power-up was the "Option" or "Multiple" power, which outfitted the Vic Viper with up to four satellite guns that fired along with the player.

Gradius V evolved the mechanic by including a formation command that allowed the player to adjust the arrangement of the Options. The most powerful configuration was the "Direction" command, which allowed you to aim the Options in any one direction. This was a single-stick game, so you would have to hold down R1 to switch from moving your ship to directing your Options. It took a bit of manual skill, but, once grasped, it was a revolutionary addition to the Vic Viper's arsenal. As in just about every horizontal shooter ever, your main cannon could only fire to the right. The Direction ability, however, now let you cover angles never before possible, allowing you to go after enemies that you might have had to sweat out before because you could not hit them. Almost nothing was out of your reach so long as you had those Options. If you so fancied, you could even swing your laser beam around as though it were a sword.

Even so, the game was still brutally hard. The first stage was very simple, but the difficulty ramped up sharply from there. Like nearly all shoot 'em ups, it required more than just good reflexes. The game really demanded that you constantly replay stages in order to memorize the patterns and layouts. Then, even if you did know a stage, it would take only a single lapse in concentration to ruin your day, since the loss of a ship would mean also the loss of all upgrades earned for that ship. You could argue the case that such punitive design was archaic, but the experience would have lasted less than an hour had you been able to play straight through in one session. That is never the true experience of playing a good shoot 'em up. It is not a movie to be digested in one evening. It is an active and ongoing endeavor, to be conquered through study and practiced skill. Mind you, this approach will not suit every player or every game. I personally would never have put in the time to beat this impossibly difficult game, had it not been for the same encouraging continue system seen in Ikaruga, which awarded you an extra continue every hour just for sticking with it, so that eventually even the most hopeless player would get to see the end credits. Then, even after beating the game, players were encouraged to experiment with several unlocked weapons, which presumably were left out of the first playthrough because they did not mesh so well with the overall design of the game.

In the meantime, the game was made, not really easier, but marginally less demoralizing by the inclusions of a two-player cooperative mode, immediate respawns, and the ability to retain Options after losing a ship. The only upgrades that would not disappear along with a lost life, the Options would linger on the stage for the player to reclaim upon respawning. Since the default specs left the Vic Viper pitifully underequipped for the later stages, these floating balls would become your only lifelines, and I remember many a frantic moment in my co-op games, when my partner or I would have to make a daring plunge to scoop up someone's dropped Options before they scrolled off the screen.

Exceeding all previous installments, Gradius V gave genre fans something to truly cheer about. Moreoever, Treasure once again proved, not only that they were the masters of 2-D action, but that a great 2-D game was a great game, period. I'm not a hardcore shoot 'em up player, but my hours with Gradius V were some of the best I had with the PS2.
Posted by Henry at 4:47 PM

Crap. You keep reminded me of great games that I don't own but should. Time to jump onto eBay...