Whisper of the Heart

Whisper of the Heart (1995) was Studio Ghibli's first theatrical feature directed by someone other than Hayao Miyazaki or Isao Takahata. Based on a manga by Aoi Hiragi, with a screenplay by Miyazaki, it was the directorial debut for Yoshifumi Kondo, who had previously worked as an animator and character designer on a number of Miyazaki and Takahata's projects. Tragically, this would be the only film Kondo would ever direct, as he died just a few years later of an aneurysm said to have been brought on by overwork. If the beginnings seen in Whisper of the Heart are any indication, then Studio Ghibli and the world lost a tremendous talent.

Set in then-present-day Tokyo—in fact, it's the same Tama Hills area, just a generation later, as depicted previously in Pom Poko—Whisper of the Heart follows Shizuku, a 14-year-old junior high student, as she prepares for the transition to high school and, perhaps, the rest of her life. The premise is more straightforward than previous Ghibli films, although this is also, in many ways, a story distinctly concerned with Japanese society. If you've been around anime for a while, then a lot of this movie's "peculiarities" that probably shouldn't jibe with your own junior high experience may not even register as anything out of the ordinary. If, on the other hand, you're one of those viewers wondering why the female students are all wearing sailor outfits, then perhaps some cultural notes are in order.

The key thing you really need to understand is that, in Japan, although most students continue from junior high into high school, it is not compulsory, and there is actually a lot of competition and complicated admissions procedures to get into higher-ranked schools. When anime and manga characters are stressed out over "exams," this is usually referring to high school entrance exams. The process is vaguely similar to getting into university for those of us in the US. Meanwhile, in Japan, what high school you end up in often predetermines what university you attend, or whether you proceed to higher education at all; students not on track for college typically go from junior high to vocational high schools that prepare them for jobs instead. Thus, the transition from junior high to high school is a pivotal moment in the Japanese student's education, as it may well dictate how they spend the rest of their life. Oh, and those sailor outfits? I don't know why either, but that's just the standard uniform in Japan for some reason.

In Whisper of the Heart, we catch Shizuku coming up on that pivotal moment, but, whereas more ambitious students are stressed out over whether they will make it into the high school of their choice, Shizuku doesn't seem to have a clue what she wants for her future. A voracious reader, she is, however, sufficiently distracted by her books that she is not initially too worried, not even to the extent that her situation probably warrants. Instead of studying for exams, she reads fiction, checking out book after book from the library. And, apparently, she's not the only one. Looking over the checkout cards in her books, she notices that every book has been checked out previously by some guy named Seiji Amasawa.

If you were born after this movie was made, you may not even know what the deal is with these "checkout cards," since most libraries just keep digital records nowadays. But this is obviously the setup for a romance, perhaps of the fairytale sort found in Shizuku's books, and, although it is not as contrived as it first sounds, Shizuku does end up meeting and falling for Seiji, a fellow student in the same year but a different class.

The heart of the film, which truly emerges after they begin their relationship, is Shizuku's struggle to define herself. In Seiji, Shizuku is confronted with someone who knows exactly what he wants out of life. His dream is an eccentric one—he wants to be a professional luthier (maker of stringed instruments)—but he's already invested a good deal more thought and effort into it than Shizuku has in any plans for herself. This is not a story about "finding" yourself in someone else, but, for Shizuku, meeting Seiji becomes a sort of catalyst for her to work seriously at figuring out what she's going to make of herself. Because she loves stories, her first thought is to become a writer, which she quickly learns is hard work, as difficult, in its own way, as any other trial a Ghibli protagonist has ever gone through. Like most budding young artists, she grapples with feelings of inadequacy, knowing that her work is her very soul and yet still she must assess it critically as unsatisfactory. Such are the setbacks and disappointments one faces on the road to becoming oneself. You wonder where you're headed, question whether or not you can really get there, perhaps change your mind several times along the way to where you finally end up, if it's anywhere at all. Maybe some people are born knowing exactly what they want to do with their lives, but I would consider them the lucky ones. That has not been my experience, and so I can totally identify with Shizuku's struggle, which is depicted almost crushingly true-to-life. 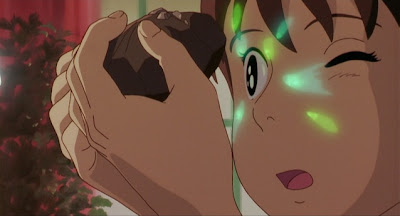 Whisper of the Heart is perhaps not altogether Ghibli's most profound work. It is still an anime about junior high students and not able to escape all the attendant cliches, such as a subplot that has Shizuku unwittingly drawn into a love quadrangle, which instead becomes a comedy of errors because these Japanese students must be so indirect in expressing their intentions. That one is a facepalm-inducing subplot that has precious little to do with the main story, but Whisper of the Heart is filled with many other minor digressions that flesh out the characters in subtle ways. Shizuku's family, for instance, is, first of all, not only present and active in her life, but her parents and sister actually come across as complete people unto themselves, as opposed to just plot devices. We learn from dialogue here and there that the mother is attending school as a grad student. Meanwhile, the older sister, in college and also working, is ready to move out of their cramped apartment, where she shares a room with Shizuku. Later on, we see that Shizuku has the room to herself. The movie does not dwell on these details, but they make conversations sound more convincingly real and provide a sense that there is more going on in this world than a single teenager dealing with her angst. One of my favorite such bits comes when Shizuku visits her best friend, who, as they head to her room, casually whispers, "I'm having a fight with my father. I'm not talking to him." This is never followed up on, and the father in question, perfectly affable, gives no indication that there is any such fight. It's just a silly inclusion, as believable as it is insignificant.

Among Ghibli films, Whisper of the Heart has most in common with Kiki's Delivery Service and Only Yesterday, both of them similarly more subdued stories of young females wrestling with questions of personal identity. If Kondo was not yet so accomplished as his predecessors in the Studio Ghibli director's chair, exhibiting not quite the flair of Miyazaki nor the depth of Takahata, nevertheless his Whisper of the Heart was possessed of an earnestness and sincerity that have made it a personal favorite of mine.
Posted by Henry at 11:28 PM