Death of the Cool

Gameplay should be what counts in a fighting game, yes, but one of the reasons I have not been able to deem Street Fighter IV the definitive Street Fighter actually has nothing to do with how it plays.  It's the art.  More specifically, it's the character design, which is and always has been the other crucial component of a fighting game--that element that can earn a title tons of devoted fans who will never compete at a tournament level, but who will cosplay as their favorites and build shrines to them.
Obviously, SFIV contains mostly characters that were designed more than a decade ago, but these are still new takes, some of which I find to be quite disappointing.  Ryu is a bit thick, Sagat looks like a dummy, and none of the females are attractive.  To be fair, many of the other characters are spot-on, but the goofy Chun-Li and haggard Rose are probably the worst they've ever looked.

None of that really compares, however, with SFIV's wholly original additions to the franchise.  Hakan would be the most acceptable if he weren't inexplicably orange, but Abel, El Fuerte, Rufus, and Seth are all hopelessly lame.  That leaves the girls, Crimson Viper and Juri.  These are two characters who could look good someday, but my initial impressions of both were that they were uninspiring attempts by Capcom to create King of Fighters-style "cool" characters, and they simply lacked that SNK magic--that certain je ne sais quoi--that identified a true original.

But, y'know, since thinking that, I've gone back and replayed a lot of SNK games, and I've come to the conclusion that those originals were not that cool either.  Or, at least, if they were cool once upon a time, then that time is long past.

Sure, King of Fighters has always had its dud characters, but I seriously used to think that its better characters were the coolest in any video game.  The unyieldingly derisive Iori Yagami was a particular favorite of mine. 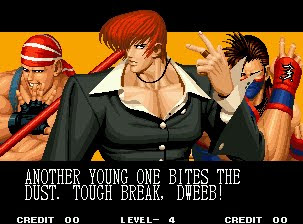 Looking at him now, I have no idea what I ever liked about him, and I just feel embarrassed.  Even among the official art, there is almost no piece that manages to make his hair work.  And why are his knees tied together?  How is anyone supposed to run like that, let alone jump and kick?  He doesn't seem built for street fighting, though he's hardly alone in that. 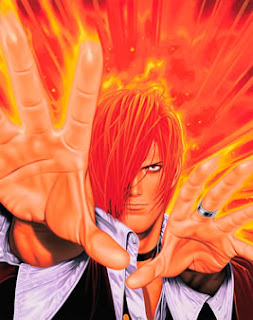 What is wrong with Iori is pretty much what is wrong with all of the characters in King of Fighters; these designs were made for the runway, not the ring, and their obsolescence was built-in.  Unfortunately, SNK Playmore hasn't really kept ahead of changing fashions, and the latest designs are among the series's worst.  Or maybe I'm the one that has no fashion sense.  Actually, there's no "maybe" about it.  But I think I'm just tired of the whole blasted fashion model street fighter aesthetic.  Now I just want fighters to look like fighters, as they did back in Street Fighter II.

To be fair, it's not just SNK that has failed to age with grace.  As another example, take Dante from Devil May Cry.  Here's another guy I used to think was badass.  But lately I've been playing a lot more Western-developed shooters, and when I put him next to a guy like Marcus Fenix, I realize that Dante is truly not that far removed from the typical effeminate JRPG hero.  He's stupidly good-looking, wears flashy clothes, and spouts some embarrassing dialogue.  I wouldn't call Marcus Fenix "cool," but in the context of a gaming landscape filled with space marine-type characters, Dante seems less than manly, and surely that isn't cool. 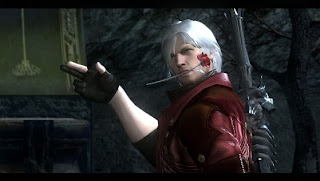 So what is cool now?  I have no freaking clue, and I'm not sure I care anymore.
Posted by Henry at 6:48 PM

I think Dante is still cool, both looking back at his initial incarnations and at the more recent ones. The space marine types, on the other hand, are hard, not cool. But maybe that's as much as to say that hard is the new cool.

Not in my book, though. Japanese hair, flashy duds, manly that ain't. But how manly is it when Tyson Rios bear hugs Elliot Salem from behind? Or worse, vice versa.

And what about our ape-hating, nectar-loving, homoerotic brothers in arms in Haze?

The truly timeless character designs are rare, and I wouldn't number any of the machine gun jockeys among them. Mainly because they, like the shooter games they inhabit, are indistinguishable from each other. I mean, don't they all look like Gears of War now?

Who would ever mistake Mario for any other character? Solid Snake - classic. Cloud Strife - brilliant. Samus Aran - Varia suit or not, you always know it's her. They even did a bang-up job with her Zero Suit. All super cool, too, unlike the Hakans of the world, who are distinctive, but obviously clowns.

So, space marines = hard, not cool. Got it. Good to know.

Reminds me of that Allen Iverson commercial, where he talked about how he didn't want his kids thinking he was hard, but if some homeboy caught him on the street and asked if he was hard, then, yeah, he would tell them he was hard.

Of course I was blissfully unaware of the down-low subculture back then, but do you suppose there was a hidden message there?

I think many of those commercials are now suspect. Larry Johnson as his "mom" or "grandma" or whatever it was. Penny Hardaway and Lil Penny. What was Lil Penny if not a surrogate dong?