After months of rumors and speculation, Marvel vs. Capcom 2 has finally arrived on the PS3. I'd really been looking forward to this, but I'm overall pretty disappointed with how it turned out.

The game is a real bore when you don't have friends to play against. The addition of online play was supposed to solve that, but the reality is that I don't actually find it fun to play with people I don't know and can't see. Fighting games are best enjoyed playing against a buddy, while other mutual friends excitedly look on and wait to play winner. With online, at worst you'll get some foul-mouthed, obnoxious idiot on the other end. It's wiser to just turn off voice chat, but what remains is a very sterile experience. But I'll admit that these are my own problems, and I'm sure there are plenty of other people who love playing online.

What disappoints me more is that Backbone Entertainment's port of MvC2 suffers from the same flaw that afflicted their Super Street Fighter II Turbo HD Remix. There are no shortcut buttons for "all punches" or "all kicks." Their absence was a minor annoyance in HD Remix, but it's a much bigger deal in MvC2, because very nearly every super in this game is performed with a quarter-circle motion and PP/KK. And super combos see greater use in MvC2 than in any other fighting game. Cable, one of the strongest and most important characters in the game, is feared only because of the threat posed by his damaging beam super. If you can't reliably fire it off, then you're better off not even using him, because an impotent Cable is only going to be a burden on his team. But that doesn't leave much game for the many players who normally base their play around Cable.

These and other similar macros have been standard in nearly every home port of a fighting game since the 32-bit era. I don't see that the argument can defensibly be made against their inclusion, and all the poorly reasoned attacks I've seen against my stance only strengthen my case.

The usual position assumed by forum-dwelling posers is that PP/KK buttons are a crutch for the weak, and if you want to get serious at the game, you should at least be able to hit two buttons at the same time.

I suspect these subnormals don't really grasp what "casuals" means when it comes to fighting games. You don't need to be competitive at a national level in order to enjoy the competitive aspect of the game. When my co-workers and I used to play during breaks, none of us were what I would consider to be good at the game, but neither did we just blindly mash buttons until somebody lost, then laugh afterward, nobody even knowing who was playing which character. When we went at it, we played to the best of our ability to see who was the better player among us. Even if they meant nothing to the rest of the world, those tight matches were still immensely rewarding for the victors. Of course even the best of us would have gotten smoked by Justin Wong, but so would almost everybody else in the world playing the game. That doesn't mean the rest of us shouldn't be allowed to enjoy a game, just as surely as college basketball players can take pride in their meaningless NCAA careers. But the loss of long standard features in this version means that some players will not be able to play at their best, effectively ruining the contest at those novice-to-intermediate levels.

No, the divide on this issue is not really between tournament and casual players, but between (weak) stick users and pad players. It's not a coincidence that tournament players tend to be stick players, because, for years, arcades were the only way to expose yourself to a variety of play styles in a competitive atmosphere, and they didn't generally offer controller ports for plugging in your DualShock. But ever since Evo, the biggest fighting game tournament in the world, switched from holding matches on arcades to consoles, there have been pad players placing highly among the nation's best. So, no, playing on a stick instead of a pad is not necessarily a mark of superior skill, and the wannabe elites who would say otherwise are themselves complete scrubs at this and every game. I seriously doubt any truly top-level stick player would say that these simple shortcuts make any meaningful difference in the results.

On the contrary, I suspect a larger number of tournament players would regard playing on a pad as a handicap. It's simple enough to click two punches simultaneously on a joystick, but it's another thing entirely when you're playing with thumbs on a pad. The inclusion of shortcuts was never a lazy cheat, but a way to lessen the handicap that thumb players inherently face. It's not exactly helping a scrub to bust out link combos. Simply pulling off a super move would never be considered skillful execution in and of itself, so there's nothing to prove there. Top players expect all this and more, and no tournament player would fear being upset by a lesser opponent's use of an unforeseen PP button.

Not everybody can afford to pay the $70+ for a decent joystick. More importantly, not everybody is comfortable playing on a joystick even if one is available. The hardcore stick users represent only an extreme minority of the people playing this and every other fighting game. I'm sure Capcom must be aware of this, or else they wouldn't have included all those macros in their other games. In fact, I know the real reason why Backbone Entertainment left the shortcuts out of this port.

In the legitimate Japanese-developed games, the key config screen has the player assigning a function to each button. 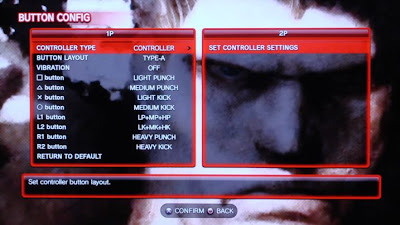 It can be cumbersome to have to scroll through a long cycle of functions just to reassign basic punches and kicks to different buttons. Players who were around during the old SNES SFII days might wonder why things have seemingly regressed from the elegance of assigning a button to each function. Back then, if you wanted to set Light Punch to the A button, it was as simple as highlighting "Light Punch" and then pressing A. 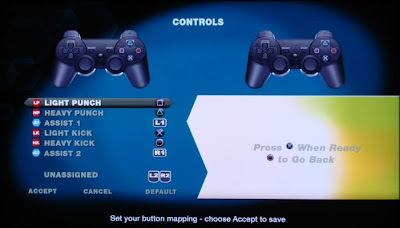 I know for a fact that Backbone deliberately went back to the old method in an attempt to provide a less cluttered, more user-friendly interface, but it actually does more harm than good, because now the only functions available are the six basic ones. They still could have implemented a long vertical list of additional functions, but maybe that would have been too ugly, maybe it didn't cross their mind, or maybe they just didn't care about the many players who would have appreciated it.

The key configs in all the Backbone ports I've played, dating back to the SFII emulations in the Capcom Classics Collection releases, have been screwed up in other ways too. The default layout doesn't conform to standards established over dozens of Capcom six-button fighting games released over the years. In the Capcom-developed games, the heavy attacks are R1 and R2. Nearly every commercial joystick is laid out to work out-of-the-box with this configuration. 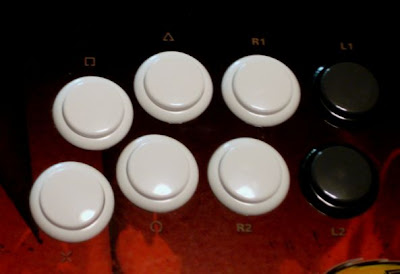 But in the Backbone-developed ports, the heavy attacks (or assists in the case of MvC2) are L1 and R1. In other words, it's modeled after the SNES pad layout. If you want to plug in a joystick, chances are that you'll have to reconfigure the buttons to fit the arcade 2x3 layout. It's as if the default layout is meant for pad play, yet this game doesn't provide the basic options to really help pad players compete. Really, it seems like the simplified button config interface was only necessitated because this game forces you to reconfigure your buttons.

Mind you, I used to play this game on the Dreamcast, where, even though the shortcuts were available, it would have been silly, on a controller with only six buttons, to trade any of the six normal functions for a PP/KK macro. So it's not as if I haven't dealt with this once already. Back then, I found a setup that worked for me, but even that went out the window any time I was playing in a group of more than two people. You see, it's not fun having to sit through the process of every player customizing their buttons each time their turn comes up. Because I was already indisputably the strongest player in my group, I was willing to stick with the defaults in order to save everybody time, but my thumb-based pad play definitely suffered when I had to struggle to hit two sideways adjacent buttons at the same time on the Dreamcast pad. Telling me that I can reconfigure my buttons is no better an answer now than it was then.

My play improved drastically on PS2. (And no, the PS2 port was not a bad version. There were some very minor differences, but nothing close to what mongoloids habitually parrot out of secondhand ignorance. Nor is the Dreamcast version "arcade perfect." ANY TIME you move from one platform to another, there will at the very least be minor speed differences, among other unique glitches that are known to exist in either arcade or Dreamcast, but not both.)

For the PS3, I do own a joystick, so that's an option. But for basic movement, I've always preferred a good D-pad to stick. Me playing on stick, especially in a game with such broad planes, would be me playing with a handicap.

I know these sound like such minor nitpicks, and perhaps my time would be better wasted trying to adjust than in blogging my complaints. But MvC2 was formerly my best game, and it frustrates me that, for the most ridiculous of reasons, I cannot now play it to the best of my ability.
Posted by Henry at 7:27 PM