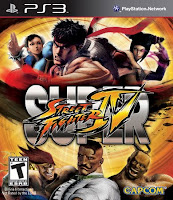 What should be the definitive version of Street Fighter IV is surprisingly lacking a lot of the polish and production that went into the original release.  This is apparent right from the box art.

When Capcom first unveiled the North American Street Fighter IV cover, that crappy, pasted-together clip art looked like it would be the one disappointing piece of a monumental game launch.  It was typical of Capcom USA, which had given us, among other things, the Okami box art sporting an IGN watermark.  I just thought that maybe an event as big as Street Fighter's long-awaited return warranted something better.  Miraculously, reason prevailed when the fan community actually managed to change Capcom's mind and convince it to simply stick with the Japanese artwork for all regions.  Alas, there was no eleventh-hour rescue this time, and although the North American Super Street Fighter IV cover is decent, for being a lazy Photoshop assemblage of clip art, it is markedly inferior to the original piece used for the Japanese box art.

While the quality of the North American box art may seem an insignificant element, which is counterbalanced by the thick full-color manual, the laziness unfortunately creeps into the in-game presentation.  On boot, a brand new opening cinematic follows the usual legal screens, and it is excellent, if not as comprehensive as SFIV's.  But what's missing is Exile's awesome "Indestructible" theme song, which is gone without a trace, and I can only guess that it was cut to save on licensing fees.  In its place is an instrumental medley that, while good, doesn't get me nearly as pumped as "Indestructible."  Again, small stuff in the grand scheme, but that's not the end of it.  Remember those slick in-game move lists that were modeled after the panel art on the old coin-op machines?  Well, they've been replaced with boring traditional scrolling screens of just move names and button inputs.  Is it a big deal? No, but it all factors into the presentation score, and it begins to remind me of the lack of effort or pride that, before Street Fighter's glorious relaunch, produced things like Capcom Fighting Evolution.

Capcom has inexplicably cut out even some gameplay modes and options.  I won't miss the Survival and Time Attack challenges, but where is the Gallery for viewing unlocked art and videos?  Perhaps Capcom realized that nobody would ever want to relive the game's wretched endings, especially considering that SSFIV's brand new anime cut scenes are just as awful and poorly animated as before, if not worse.  In fact, the opening cut scenes for individual characters are now nothing more than still figures on barely animated backgrounds set to voice-over narration.  On the bright side, Capcom did implement my most wanted feature, the option to set the music to character themes during versus play.

In the long run, of course none of this stuff matters one bit.  This is a fighting game, after all.  More specifically, this is Street Fighter IV, and if you've played it before, there is nothing that is going to surprise you in this new edition.  It is still the best fighting game on the market, and if SSFIV doesn't fundamentally alter the core game, it at least adds a lot more of what was already there.

A fighting game is its characters, and SSFIV adds ten, which is frankly a massive leap.  That brings the total number of characters to thirty-five, making for the largest cast of Street Fighters ever assembled (unless you count Street Fighter Alpha 3 MAX for the PSP).  It's also the most comprehensive roster ever, bringing together the best from Street Fighter Alpha and Street Fighter III, on top of the complete Super Street Fighter II cast.  I would have liked to have seen Alex from SFIII, but I don't know that I would have traded any of the three SFIII representatives in this game for him.  Maybe I would have traded jailbird Cody, but I suppose, considering the guy's place in the Street Fighter/Final Fight canon, he deserved a second chance.  As for the brand new characters, Juri and Hakan are definitely a step up from the initial set of SFIV originals.  Juri represents a fighting style and nationality that many players have been asking for in SF.  I just wish she weren't so overtly evil and perverse, which seems more out of SNK's bag (e.g. Vice and Mature); Capcom has traditionally been all about the fight, with minimal or no focus on characters' alignments.  On the opposite end of the spectrum, Hakan feels more like a vintage design, albeit a freakish one in the vein of Blanka or Dhalsim.  Like all of the SFII classics, his character rests in his visual design and fighting style, instead of a tiresome personality.  Although I originally thought Abel and El Fuerte were the more normal SFIV characters, I ended up hating them both because of their obnoxious voices and dialogue.

A year later, my problems with SFIV's systems remain.  Giving players now a choice between two Ultra Combos for each character makes little difference, since it is pretty clear in most cases that one option is simply better.  Powering those Ultras, the Revenge meter, which seemed questionable to me a year ago, has since become my greatest frustration in the game.  It makes no sense to reward a player just for taking damage.  Capcom should have learned its lesson with Capcom vs. SNK 2's similarly criticized K-Groove (AKA the "Scrub Groove").  At least in CvS2, players didn't have to use K-Groove, and the other Grooves had advantages of their own that made them at least as effective.

The Focus Attack meanwhile remains mostly an expert's maneuver that is unlike anything else in Street Fighter.  I don't actually have much time to practice the game, so I still often forget that the Focus Attack exists, and I end up just playing as though this is SFII.  That leads to a lot of beatings because this is definitely not SFII, and the Focus Attack makes a huge difference.  If you don't know your character's specific Armor-Breaking attack, you'll end up taking a lot of Focus Attacks to the face.  On the offensive end, Focus Attack-canceling and Dash-canceling introduce crazy possibilities that experts can use to run rings around casual players who won't even comprehend why they are losing.

If these terms mean nothing to you, that's okay, because they don't mean much to me either.  These elements foreign to my SFII-informed experience are not necessarily worse than Parrying or Custom Combos, but SFII had none of those things and endures to this day as the cleanest, most fundamentally sound 2-D fighting game.  Frankly, things like Focus Attacks, Parrying, Custom Combos, etc. are gimmicks, albeit game-altering ones, which is precisely the problem.  A good game shouldn't be distinguished from its peers and predecessors by its unique gimmicks.  They don't evolve the game in any way, they just make it different and harder to understand.

You might wonder, if I had it my way, wouldn't we just be playing Street Fighter II over and over again for eternity?  Well, people do still play SFII for a reason, and it's the same reason that people still play chess, or tennis, or any competitive game that has been around for generations.  If the rules of the competition are sound, the fun comes in what an endless supply of competitors can bring to it.  That said, there are improvements that can and have been made to SFII, mostly in the areas of control and game speed.  And games have been able to add interesting things without taking away from the core of SFII.  Dashing and EX Specials, for example, do not alter the basic dynamic of a match, but they create a few extra possibilities here and there to make newer games fresher without breaking them.

Even with all its flaws, however, Super Street Fighter IV is the biggest Street Fighter ever and, I say again, the best.  Even with its Focus Attacks, it is less complicated than Alpha 3.  Even with its Ultra Combos, it is less backward than 3rd Strike.  And even with all that crap, it simply feels better than Super Street Fighter II Turbo, which I now find way too fast and jerky.  The online options are also vastly improved, although I still don't find much satisfaction in playing against passing strangers.

Oh, the bonus stages?  Totally lame.  They are something that you miss after they are taken away, but then, once you have them, you never want to play them, because they are and have always been stupid and pointless.
Posted by Henry at 12:03 PM